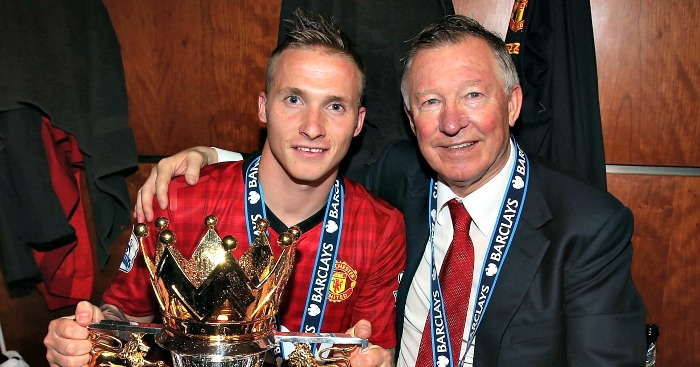 With Nathan Dyer (no Premier League starts), Gokhan Inler and Demarai Gray set to win title winner’s medals if Leicester go all the way (assuming Gray climbs off the bench once more), we take a look at ten players who bizarrely have one rather shiny Premier League medal.

10) Mike Newell (Blackburn, 1994/95)
Only 14 players received a winner’s medal when Blackburn topped the Premier League in 1994/95 and while Sky Sports’ Tony Gale made just 15 appearances, Newell’s part-time contribution really stands out. The striker had been a regular in the preceding season, but a return of just six goals in 28 matches prompted Rovers to splash out on Chris Sutton in the summer of 1994. As a result the ‘SAS’ was formed and Newell was left sitting in the corner muttering about how women should get back in the kitchen. With just two starts and ten games as a sub, Newell just about managed to get his hands on a medal. Goals? Not one.

9) Juan Cuadrado (Chelsea, 2014/15)
Branislav Ivanovic, John Terry, Eden Hazard and Nemanja Matic all played over 3000 minutes of Premier League football last season, but still got the same medal as Juan Cuadrado, who played just 312 minutes. And they were pretty much 312 sh*te minutes. A reminder – in case you needed it – that the Colombian cost £24m. “Everyone believes that he needs to play all the time or at least every match, but like every player that joins a new club, he needs time. Time which hasn’t been given to Cuadrado. I do believe that he’ll be amazing next season,” said Mourinho. To be fair, he never specified that would be at Chelsea; Cuadrado is currently doing rather well at Juventus.

8) Mateja Kezman (Chelsea, 2004/05)
Generally, strikers are brought in to score goals – especially strikers that bag 105 strikes in 122 matches for PSV Eindhoven. Kezman, however, seemed to think that goals were overrated during his brief spell at Stamford Bridge, notching just four in 25 matches as Chelsea won the league in spite of his pitiful efforts. Those goals in full: The fourth goal (a penalty) in a 4-0 win over Newcastle, a tap-in in a 3-1 win at Norwich and the final two goals (one a penalty) in a 4-1 win over Crystal Palace. Kezman was sold to Atletico Madrid after a single season with the Blues, but not before he picked up the biggest trophy of his career – as well as the League Cup. “I didn’t come to London to walk the streets and spend money,” Kezman told Belgrade’s Vecernje Novosti newspaper at the time. “It turns out that I’m the victim of tactics – I didn’t get a real chance.” Poor Mateja.

7) Luke Chadwick (Manchester United, 2000/01)
Manchester United, West Ham, Stoke City, Norwich City, MK Dons, Cambridge United, Soham Town Rangers, where he is currently the only Premier League title winner. “My best memory at United was probably my goal at Bradford when Beckham sent me through,” said Chadwick last year. “I had a touch with my right foot, had it on my left foot and I thought this could go absolutely anywhere. But I hit it well and it went right in the corner. It was an incredible feeling to score for United. It was a massive thing to be involved in that squad, but I felt it wasn’t because of me that we won the title that season.” Don’t be so harsh on yourself, Luke; where would United have been without your six starts and two goals?

6) Jeremie Aliadiere (Arsenal, 2003/04)
Three goals in ten matches in the Qatari Stars League is quite the hot spell right now for the Frenchman (still only 32) who scored 14 goals in 128 league appearances in English football. Just one of those goals came for Arsenal in a six-year spell remarkable for a spate of injuries and Arsene Wenger’s ridiculous loyalty in giving him a new contract despite him being patently below the required standards of a club then in an annual fight for the title. The more things change, they more they remain the same. Aliadiere finally left in 2007 with a winner’s medal from 2003/04, when he played 257 minutes of PL football. In those days of needing ten league appearances to be awarded a medal, he came off the bench three times for a grand total of 31 minutes with the title already won. Merci Arsene.

5) Jiri Jarosik (Chelsea, 2004/05)
Jarosik was brought in midway through the season to give Chelsea an extra boost in the title race. The only problem was that he wasn’t very good. One of those strange signings that only Roman Abramovich was keen on (wave your hands, Alexey Smertin and Yury Zhirkov), Jose Mourinho soon realised that the Czech didn’t cut the mustard. Somehow Jarosik clawed himself to 14 appearances – 11 as sub – before being packed off on loan to Birmingham, where his introduction as a Premier League winner was no doubt met with raucous laughter from his new teammates. Last seen at Alaves, Jarosik is currently resisting the urge to retire while polishing his lovely medal.

4) Ronnie Wallwork (Manchester United, 2000/01)
Stabbed in a nightclub, imprisoned for handling stolen cars, won the Premier League with Manchester United. Sorry, what? Back in 2000/01, Wallwork started four Premier League games as United cruised to the Premier League title. Two of those starts were in the the post-title hangover defeats to Derby and Southampton, but no matter: Wallwork was a Premier League title winner. Not bad for a man who played just 28 times in seven years at Old Trafford. When he was released, Wallwork was described by Sir Alex Ferguson as the best Bosman of 2002. Jay-Jay Okocha and a few thousand Bolton fans might disagree.

3) Alex Buttner (Manchester United, 2012/13)
“Büttner’s been great because he’s travelled to every away game with us, he’s been involved in every single training session, he’s played three times and been a substitute another 10 times, something like that. So I think that’s a contribution,” said Sir Alex Ferguson when attempting to justify gifting a winner’s medal to the man “third or fourth on the list” of left-backs in the league, according to their Dutch scout. Actually Sir, he started four games and came off the bench once, but clearly he deserved a prize for sitting on the coach quietly while better players prepared to win the title. Buttner left in 2014 to join Dinamo Moscow, saying: “Van Gaal never gave me a chance in the Dutch team, even though I was MOTM for MUFC 14 times.” A Premier League winner’s medal and a sense of humour. Lucky boy.

2) Igors Stepanovs (Arsenal, 2001/02)
Astonishingly, the Latvian was an Arsenal player for four whole seasons, during which he made a grand total of 17 league appearances. Stepanovs had not played one single minute during 2001/02 before a spate of injuries in early February forced Arsene Wenger into a Tony Pulis-style back line of four centre-halves: Oleg Luzhny, Sol Campbell, Stepanovs and Matthew Upson. He kept his place for five straight Premier League victories, which should not strictly have been enough to claim a medal, but he was apparently fortunate to be in the right place at the right time when the silver was being doled out after Arsenal clinched the title at Old Trafford. He was a big boy so nobody dared take it from him.

1) Jack Rodwell (Manchester City, 2013/14)
By the time Manchester City won the second of their Premier League titles, the rules had changed: Players needed only five Premier League appearances to qualify. Step forward Jack Rodwell and your 108 minutes of football. Fewer minutes than Micah Richards (161), but crucially, Rodwell’s appearances came over five matches. Ninety minutes in a 0-0 draw with Stoke in September were followed by two, one, 13 and three minutes against West Brom, Swansea, Fulham and Sunderland. Basically, without Rodwell, Liverpool would have been crowned Premier League champions. And Steven Gerrard would have had that medal Rodwell so richly deserved.