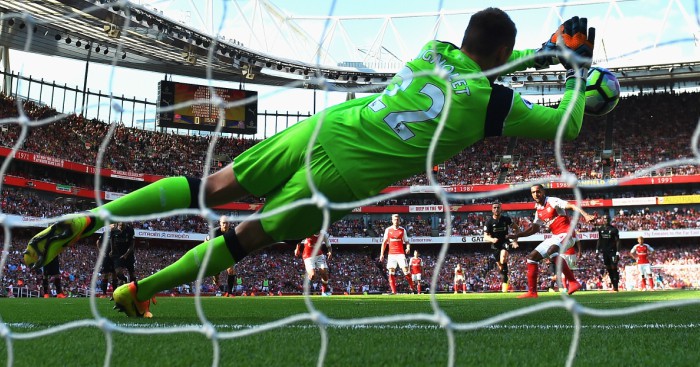 These are the keepers with the highest penalty-saving ratio according to the good people at transfermarkt.co.uk…

That’s a decent ratio from the American stopper. Not that any of his penalty saves really mattered…

Hahnemann kept out four penalties in eight games between December and February in 2007/08, but those stops also came amid an eight-game losing run which saw the Royals fall from mid-table into the bottom three. His one penalty save for Wolves also came in a 2-0 defeat to Wigan in 2010.

Despite making the top 10, Lloris hasn’t saved a penalty in over three years. His last was to deny Sergio Aguero in 2014, though the Man City striker had already scored twice from the spot that day in a four-goal haul as Tottenham were beaten 4-1.

To be fair, Spurs just don’t concede many penalties, with only five given away since the start of 2015/16. Only Premier League new boys Huddersfield and Brighton have conceded fewer, which is to be expected given they only joined the party last summer. During the same period, Arsenal have conceded 15.

No-one on this list has more Premier League appearances to his name than Al Habsi, with five of his six saves coming in 2011, a year during which Wigan conceded penalties at the rate of one per month.

He earned two points for Wigan, saving from Mikel Arteta in a 1-1 draw with Everton in 2010/11, before denying Charlie Adam the following season to secure a goalless stalemate against Liverpool.

The West Ham keeper’s five saves have been important enough to earn the Hammers five points, with his first penalty save for the club coming against Harry Kane to deny Tottenham victory in a 2-2 draw at White Hart Lane in 2015.

Not only can he stop penalties, but Adrian has form for scoring them too.

The Burnley captain is the stopper on this list with the fewest Premier League appearances but he just makes it having kept out three of the 10 penalties taken against him in 77 appearances.

The three players to have been denied by Heaton: Mark Noble, Ross Barkley and Dusan Tadic. Eclectic.

The Watford stopper has faced the most spot kicks on this list – a rate of a penalty every 5.5 appearances in the Premier League – though he remains some way off the 63 that Shay Given faced for five different clubs.

Gomes is also the only keeper of this 10 to have saved two penalties in one game – a feat only he has managed twice, with Darren Bent and Saido Berahino unable to beat the Brazilian from 12 yards despite having two bites at this particular cherry.

Each one of Boruc’s five saves have been decisive, all coming in games that ended in draws, earning a point for Bournemouth on four occasions and another for Southampton in 2012/13.

Boruc also became one of three current Premier League keepers to have kept out Zlatan Ibrahimovic penalties. The others: Joe Hart and Jonas Lossl.

Whatever your misgivings about Mignolet, the Liverpool keeper knows how to stop a spot-kick. Only Heurelho Gomes has saved more Premier League penalties, with seven of Mignolet’s saves coming in a Liverpool jersey.

As well as keeping out the likes of Wayne Rooney, Diego Costa and Jamie Vardy, Mignolet has also denied current team-mate Sadio Mane while he was at Southampton, and Luis Suarez while the Belgian kept Sunderland’s goal.

Given saving penalties doesn’t rely a great deal on having quick feet, you might expect the Southampton giant to enjoy facing them. All four of his saves came in a nine-month period last year when he denied Saido Berahino, James Milner and Harrys Kane and Arter.

That said, he also conceded six times from the spot last season, during which time only Arsenal and Hull conceded more penalties than the Saints.

The idea for this list came from the fact that Petr Cech was beaten again from the penalty spot on Wednesday night against Chelsea. That’s now 15 without a save for the Gunners goalie, who has a 16.7 per cent saves ratio having saved six of 36 spot-kicks during his Premier League career.

Despite no-one ever really believing that Almunia was good enough to be Arsenal’s No.1, the Spanish keeper matched Cech’s six saves despite facing 22 fewer penalties. His most memorable for the Gunners was probably his first to deny Robbie Keane and seal a north London derby win in 2007. Though this remains his finest work.