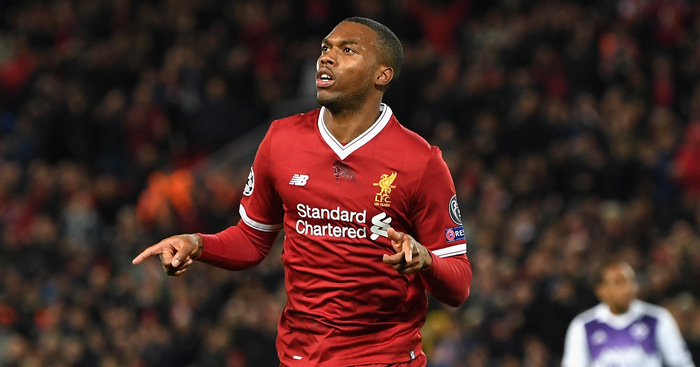 Where’s Mo Salah? The Liverpool striker has scored a goal every 111 minutes in the Premier League. But to reward consistency, only players who have played more than 6,500 minutes are considered. Otherwise Adam Le Fondre – with 11 Premier League starts – would be ahead of Ruud van Nistelrooy with a goal every 124 minutes.

10) Diego Costa – 145 minutes per goal
The former Chelsea striker is the only centre-forward here not to reach 100 Premier League appearances but 20-goal seasons for both Jose Mourinho and Antonio Conte went a long way to earning the Blues their last two titles.

Conte eventually took the decision that Costa was more trouble than he was worth but, with 11 goals, his replacement Alvaro Morata failed to match Costa’s lowest season tally of 12.

9) Javier Hernandez – 145 minutes per goal
Over half of Chicharito’s Premier League appearances have come as a substitute for Man Utd or West Ham and you could excuse the Mexican for becoming frustrated with fleeting appearances given his goalscoring rate suggests he deserves more faith.

As a regular starter with Bayer Leverkusen in the Bundesliga, Hernandez was able to sustain that form, with a goal every 142 minutes over two seasons in Germany.

8) Edin Dzeko – 142 minutes per goal
For all but his first half-season at City, Dzeko was made to play second fiddle to Sergio Aguero. The Bosnian averaged just 16 Premier League starts per season throughout his four full campaigns at the Etihad but, as an impact player, he was invaluable to Roberto Mancini and Manuel Pellegrini.

Dzeko was quite the Plan B. Not only could be relied upon for a goal but he also has the second-best minutes-per-assist rate among the ten hit-men on this list.

7) Daniel Sturridge – 142 minutes per goal
The Liverpool striker’s chronic injury woes have sadly taken the edge of his goalscoring achievements over the course of his 11 years in the Premier League. Which is a shame because when he plays, Sturridge generally scores.

Since making his debut for Manchester City in 2007, Sturridge has managed only 206 Premier League appearances, 44 per cent of which have come off the substitutes’ bench. The 29-year-old has spent nowhere near enough time on the pitch throughout his senior career but what time he has had, he’s used it pretty efficiently.

6) Robin van Persie – 140 minutes per goal
The Holland striker is one of only two players to claim the Premier League Golden Boot with two different clubs. When he won it as a Manchester United player, Van Persie was the greatest single factor behind Sir Alex Ferguson’s final title triumph.

His most prolific season, though, came the season before with Arsenal in 2012/13 when, after seven seasons of failing to break the 20-goal barrier, Van Persie smashed in 30 for Arsene Wenger to tempt Fergie into bringing him to Old Trafford.

5) Luis Suárez – 139 minutes per goal
The Liverpool striker wasn’t around for long and he caused a load of grief while he was here. But Liverpool fans who watched Suarez for those three-and-a-half seasons – which culminated in a 31-goal season that almost ended their title drought – will tell you the Uruguayan was worth all the hassle and more.

Suarez equalled the Premier League goals in a 38-game season record in 2013-14, which was broken by Mo Salah last season. But, with an assist every 245 minutes, Suarez is also the most creative striker on this top ten.

4) Ruud van Nistelrooy – 128 minutes per goal
Maybe it can be attributed to the manner of his premature exit, prompted by fall-outs with Cristiano Ronaldo and Sir Alex Ferguson; or maybe it’s because he played at the wrong time – coming too late for the Treble era, but too soon for the late 2000s era of United dominance, so he won only one Premier League title in his five-year stay. Whatever the reason, it’s still something of a mystery why Van Nistelrooy isn’t more revered at Old Trafford.

The Dutchman was one of the most ruthless, focused assassins the Premier League has seen and one of United’s greatest ever centre-forwards. Roy Keane, not an easy man to impress, certainly thought so: “Ruud Van Nistelrooy was brilliant. Ruud was the best finisher, ever, but especially in one on one situations, just the keeper to beat. When Ruud was going through one on one, I never doubted him. Some players would be going, “******* hell – hard and low? Or dink it over?”, but when Ruud was through there might as well have been no goalkeeper.”

3) Thierry Henry – 121 minutes per goal
With 176 strikes, Henry is the Premier League’s fourth highest goalscorer, despite having played at least 150 matches fewer than anyone else in the top five. No one has matched Henry’s four Golden Boots, and it would have been five in succession had Van Nistelrooy not edged him by a single goal in 2002-03. Still, that season Henry set the record for the most assists in a single campaign (20) so it wasn’t a complete write-off.

Henry scored against 34 of the 35 Premier League opponents he faced. The one side who shut him out? Swansea.

2) Harry Kane – 114 minutes per goal
The England striker has improved his goalscoring output every season since he became a Tottenham regular, with Kane hitting 30 in the Premier League for the first time last season. He’s behind that prolific pace this term but for a striker so crucial to club and country and one who is supposed to be knackered after winning the Golden Boot at the World Cup, the 25-year-old is still on course for 24 goals.

Kane has averaged 26 goals a season in the four campaigns he has led the line at Spurs. If he maintains that rate throughout the duration of his current contract, he will become the Premier League’s highest-ever scorer before he turns 31.

1) Sergio Aguero – 108 minutes per goal
After seven years of consistent goalscoring brilliance, we seem to have become somewhat complacent to Aguero’s genius. Manchester City’s record scorer has cracked the 20-goal barrier in five of his seven seasons in the Premier League and though Gabriel Jesus was supposed to have usurped the Argentine in Pep Guardiola’s mind as his first-choice centre-forward, he achieved that particular feat in the fewest appearances last season.

The 30-year-old is currently the 10th highest Premier League scorer of all-time, though by the time he’s finished at City, you can expect him to be nestled somewhere in the top five. With 148 goals, Aguero is currently two behind eighth-placed Michael Owen despite having played 112 fewer games. He’s 28 goals behind fourth-placed Henry and having recently signed a new three-year contract, the former Atletico Madrid star will have Andy Cole in third on 188 goals firmly in his sights.