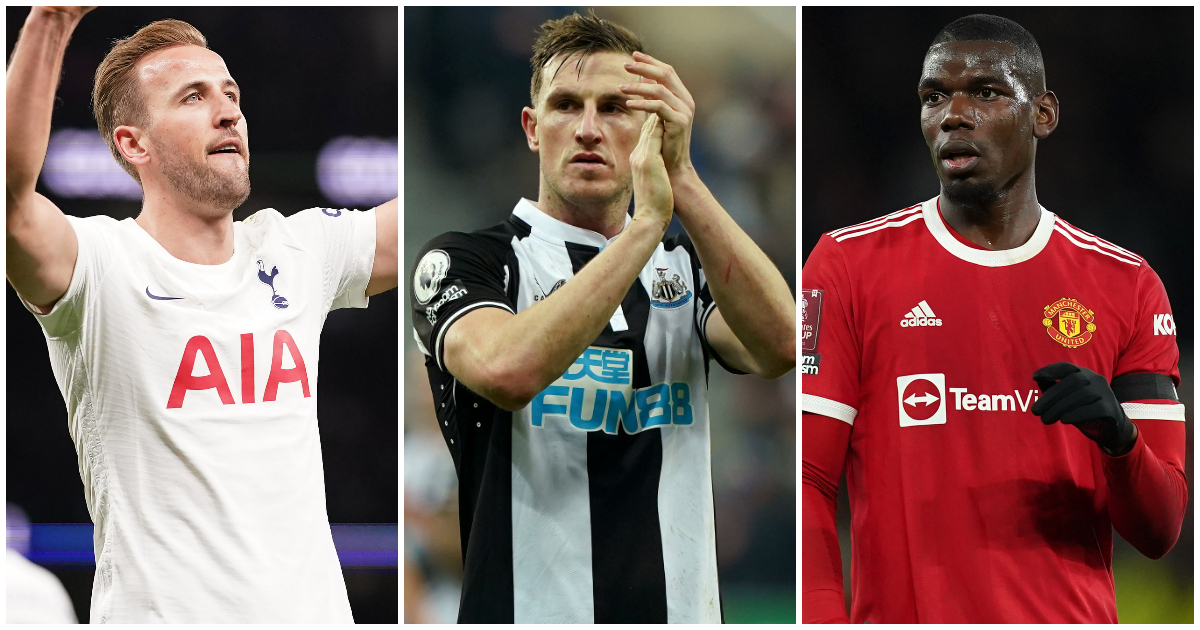 Is this the closing straight of the season? Probably not quite, is it? Some teams still have almost half their games. It’s a very long home straight if it is, but we’re short of ideas and we do at least now know how all the squads look for that long, long dash for the finish line.

So who are the 10 players who will be the most important over the closing months of the season? We reckon it’s these ones. And just to head off the inevitable comments: we’ve not got a Manchester City or Liverpool player here because we already know they’re going to finish first and second in that order no matter what anybody does. Ergo, no influence. Okay? Grand.

10) Jose Sa
Wolves’ unlikely pursuit of European football has been propelled almost entirely by their stubborn yet undeniably effective refusal to concede any goals. They don’t really score any either, so if the season is going to carry on being one of overachievement than the defensive record needs to remain as good as it is.

The startling facts are that only Norwich and Burnley have scored fewer goals, but only Manchester City have conceded fewer. And the key reason for the second of those stats has been Sa, arguably the standout goalkeeper of the season.

Only four keepers have made more saves in the Premier League this campaign, and none can match his 79.1% save percentage record. Whether Wolves maintain or even improve their current trajectory or simply drift back into the mid-table morass beneath them depends massively on Sa continuing his stellar standards.

9) Wesley Fofana
How much of Leicester’s pretty piss-poor season can be put down to the horror injury suffered by Fofana in their final pre-season friendly? Quite a lot of it we reckon, and we should find out soon enough because he’s due back in action this month.

His return can’t come soon enough and, while it will be too late to turn Leicester’s league season into anything other than a disappointment, it could yet produce Europa Conference GLORY and at least offer hope that this season, rather than the last two, is the exception.

In his absence, Leicester have conceded an unsustainable 37 goals in 20 league games – six goals more than any other top-half side and 10 more than bottom-of-the-table Burnley – as well as four in the FA Cup at Nottingham Forest.

Fofana’s return surely can’t make them worse, at any rate.

8) Alexandre Lacazette
Arsenal sold their problematic striker and former captain to Barcelona in the final moments of the transfer window, successfully getting an unhappy player and eye-watering wage off the books. That was the good news; the bad news is they did nothing to replace him.

A calculated gamble for a club in the rare position of finding themselves knowing they have only league games to concern themselves with over the closing months of the season. That itself points to things going a bit wrong for the Gunners, but it does give them a decent chance of ending the season on a positive note. Possibly even with a top-four finish, although the modern Arsenal way would really be to wait until the precise moment that’s just out of reach to start playing really well and kid people into thinking next season might be different.

Whatever Arsenal do, Lacazette – in what could well be his final few months at the club – is going to have a significant role to play. Having started just four of Arsenal’s first 14 Premier League games, he has started each of the last seven and been captain in four of those. Two goals and three assists in those seven games is… okay but his leadership will be as important as his direct contribution as he tries to guide Arsenal’s attacking young guns to that fourth-place trophy.

7) Hakim Ziyech
Hasn’t really happened for the former Ajax star at Chelsea, but there are just signs recently that this might be changing. Has started six of the last 10 Premier League games for the European champions having started just three times in the first 14 games of the season. The other good news for Ziyech is that’s he’s scored his second and third league goals of the season in the two most recent games; the bad news is that the 2-0 win over Spurs is the only game in this recent run of Ziyech starts that Chelsea have actually won.

Either that was a corner being turned by club and player, or just what happens when Chelsea play Spurs. We will find out which in due course.

6) Wout Weghorst
Burnley have followed the blueprint that other teams will find themselves having to deploy when Newcastle come calling over the next couple of years: sell a player you don’t really want to sell but at a hugely inflated price and then try to replace them at a fraction of the price. Bringing in a sharp-limbed Dutch international with a one-in-two Bundesliga goalscoring record and still having £15m left over is about as good as anyone can realistically ask for in the circumstances.

Only Norwich have scored fewer goals than Burnley this season, but the Clarets do still possess the best defensive record in the bottom half of the table. Weghorst has scored six goals in 18 matches for a Wolfsburg side that led the Bundesliga in the early days of the season but is now very much flirting with relegation. A similar uninspiring but solid return over the second half of the season in Lancashire could translate to a significant number of precious, precious points in the desperate four-way scramble for 17th place.

5) Roy Hodgson
Okay, he’s not technically a player – although imagine if he decided to go all player-manager on us now – but he’s going to have a big say on that relegation battle one way or another. And the sight of Hodgson bringing himself on as a makeshift striker for the final 10 minutes of a crucial six-pointer is a less disturbing mental image than the one conjured up by his bizarre unveiling press conference at which he declared Watford’s approach as “the siren call from the mermaid as the sailor passes by on his ship. They got the right mermaid going past the right ship.”

Hodgson the sailor or Watford the mermaid; we’ll leave it to you to decide which is the strangest element of this allegory but we know this: He’s much more likely to keep this mermaid in the Premier League than the last jolly tar they lured.

4) Paul Pogba
A number of Manchester United managers have given Paul Pogba one last chance to prove he can be the game-changing midfielder he promises to be and so often is when playing for France. Well, did it work for those people? No, it never does. I mean, these people somehow delude themselves into thinking it might, but… it might work for Ralf Rangnick.

3) Chris Wood
Newcastle’s January work should surely prove enough to achieve the immediate and urgent goal of avoiding a disastrous, world-domination-delaying relegation to the Championship. They have signed many good players. The one who could have greatest impact on those first six months is also the one least likely to be around for any global conquest that follows. Doesn’t mean it was bad business, though.

Chris Wood achieved two things for Newcastle, strengthening them and weakening a direct opponent. Rare to see in January, but everyone has a price.

And the good news for the Toon is that on early evidence Wood is even more pointy-elbowed and large-arsed in black and white than he was in claret and blue. His already division-leading aerials won stats of 5.5 per game at Burnley have jumped to a ludicrous 9.5 in his first couple of Newcastle games, while he is also managing three attempts on goal per game compared to 1.8 at Burnley.

When Newcastle win the treble in five years’ time, you won’t be able to move for the longreads on Wood’s small but vital contribution back where it all began.

2) Declan Rice
Obvious one, this. He was also very much one of the key players from the first half of the season. But he’s just about irreplaceable for West Ham in every conceivable way. A combination of Rice’s brilliance, a blank January and the desperate struggles of the Hammers’ second string to cope with the might of Kidderminster has brought into the sharpest of focus just how small – if very, very good – West Ham’s first-team core is. There are others to whom the same applies – notably their other disaster-averting goalscorer at the weekend, Jarrod Bowen – but nowhere is the difference between the starter and his replacements more stark than in the case of Rice. He genuinely might be the best central midfielder in the country right now, and his back-up is a 74-year-old Mark Noble.

West Ham find themselves in an odd position, really. First of all, they are competing for a top-four place with Arsenal, Spurs and Manchester United which is quite something in itself. But the fact the Hammers are the only one of that quartet still spinning three plates in February is more remarkable still. Arsenal are in the bleak yet strangely reassuring position of knowing they have 17 games, no more no less, remaining this season. United have the Champions League but no domestic cup involvement. Spurs couldn’t even be bothered to finish their Europa Conference campaign.

Yet West Ham and their tiny squad of players have the FA Cup and the Europa League to contend with as well as trying to punch well above their weight in the league. Rice is absolutely central to how that all pans out. That he continues to play as well as he has this season when picked is pretty much a given; how David Moyes manages his minutes and how West Ham cope in those games he sits out will actually be decisive. Having to use him for 75 minutes against Kidderminster is an inauspicious start.

1) Harry Kane
Really, it’s a wonder that Spurs still have anything to play for this season at all. They made a total mess of the summer, spending much of it on a shambolic manager hunt that produced an inadequate appointment. Thus distracted, they signed four players. An underweight Ringo Starr impersonator who has already left on loan. A right-back they just spent January actively (and unsuccessfully) trying to replace. A reserve keeper so useless he is no longer trusted even for the most simple of cup matches. And a quite brilliant centre-back… who spent most of the first two months of the season in quarantine and the last three injured. On top of all that, Spurs’ best player wanted to leave, was not permitted to leave, and spent the first third of the season sulking about it.

Now, though, Spurs somehow have all these things: a brilliant manager, a couple of new January signings and a genuine crack at the top four and FA Cup. Most importantly, though, they have a Harry Kane who once again gives a shit. Having scored just one Premier League goal under Nuno Espirito Santo, he has already netted four under Antonio Conte but far more importantly, is once again playing like the one-man attacking army of the Mourinho era. The game against Leicester will always be remembered as the Bergwijn Game, but it was also the day when Kane – faced with his favourite opponents – truly came back into the fold. He was magnificent all night and then a full member of the giddy, disbelieving celebrations at the end. Just when he thought he was out, Spurs sucked him back in.

Whether that feeling lasts beyond a summer when Spurs’ negotiating position will be significantly weaker than it was 12 months ago, who knows. But for now, with so much still at stake, a player who spent most of the first half of the season in an existential funk could be the defining player of its second half. Or his ankles might go again, one of the two.