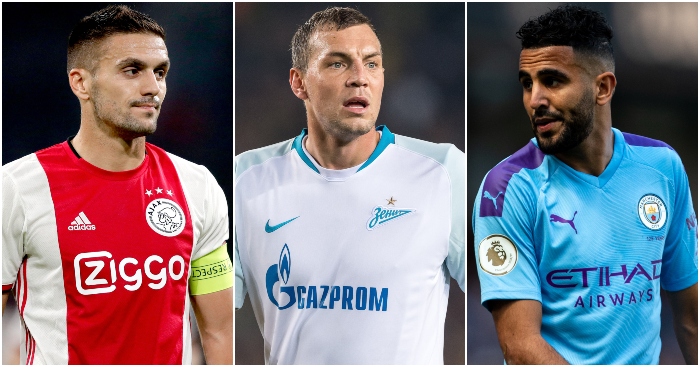 Here are the 10 players with most assists in Europe’s top 10 leagues this season, including domestic cups and European competitions…

10) Donny van de Beek (Ajax) – 6 assists
Minutes played: 1168
Minutes per assist: 194
The 22-year-old Ajax star has been heavily linked with Real Madrid and though he says he won’t move mid-season, van de Beek seems destined to be the next Ajax academy product from which the club will make a sodding fortune. The playmaker has also had to contend with a hamstring injury this season but that hasn’t stopped him from playing a direct role in nine goals in 14 games so far this season.

9)  Hakim Ziyech (Ajax) – 6 assists
Minutes played: 1346
Minutes per assist: 149
Marc Overmars could not have spelled it out any clearer for Arsenal in the summer when the Ajax director of football suggested the Gunners sell Mesut Ozil and buy Ziyech. Ajax were willing to keep their promise that they would sell the 26-year-old should a ‘good transfer’ present itself, but no one came forward with a firm offer. It seems the price has increased now the Moroccan has signed a new deal but having a hand in 14 goals in 17 games this season keeps Ziyech in the shop window.

8) Steven Bergwijn (PSV Eindhoven) – 7 assists
Minutes played: 1635
Minutes per assist: 233
The Holland winger has hit a rich vein of form recently, creating six goals and scoring another in three Eredivisie games before PSH were beaten for the first time at Utrecht last week. Bergwijn has been linked with a move to the Premier League but the 22-year-old’s suitors are perhaps looking for more consistency before they take the plunge.

7) Roberto Firmino (Liverpool) – 7 assists
Minutes played: 1168
Minutes per assist: 167
No one has created more goals in the Champions League this season with Firmino tied with five other player on three assists in three games. Only three players, Phil Foden being one of them, have created more big chances for the team-mates in the Champions League and it’s a similar story in the Premier League. Only Kevin De Bruyne has laid on more big chances that the seven Firmino has teed up.

6) Jadon Sancho (Borussia Dortmund) – 7 assists
Minutes played: 951
Minutes per assist: 136
With six assists and three strikes, the 19-year-old has been contributed directly to a goal on the hour every hour so far in the Bundesliga. Sancho has yet to turn it on in the Champions League this term which is reflected in the fact that the England winger has only created three chances in three games, the same number as Cesar Azpilicueta.

5) Islam Slimani (Monaco) – 7 assists
Minutes played: 626
Minutes per assist: 89
The Leicester loanee has started his Monaco career in spectacular fashion, playing a part in 12 goals in seven Ligue 1 matches. Slimani has missed one game, which just so happens to be the only game in which Monaco drew a blank. The following week, against Brest, he made three and scored the other in a 4-1 win. Reports suggest Monaco have the option to make his move permanent for £7.8million and they have already started to copper up.

11 – Players involved in the most goals in their first seven Ligue 1 games since Opta analyses the competition (2006/07):

4) Riyad Mahrez (Manchester City) –  8 assists
Minutes played: 745
Minutes per assist: 93
The City winger has made very good use of the time he has been given by Pep Guardiola this season, with Mahrez in and out of the side in the Premier League. Still, he has created five goals and scored another two with just five starts and three cameos off the bench, while in the Champions League where Mahrez has played every minute, Pep has been rewarded with an assist in each match and a goal against Shakhtar Donetsk.

3) Kevin De Bruyne (Manchester City) – 9 assists
Minutes played: 854
Minutes per assist: 95
After his injury problems last term, the City star seems intent on making up for lost time this season and so far De Bruyne has been directly involved in a Premier League goal every 62 minutes. The two games he hasn’t started were against Norwich and Wolves – City’s two defeats that have left them five points behind Liverpool. His eight league assists have all come from open play, and no one in the division has created more chances (31) or big chances (10)

2) Dusan Tadic (Ajax) – 10 assists
Minutes played: 1567
Minutes per assist: 157
The 30-year-old former Southampton attacker has proved his worth to Ajax again this season with nine goals in addition to 10 assists in a total of 18 appearances. In only two of 10 Eredivisie games has last season’s joint-top scorer not been directly involved in a goal. No wonder Ajax have tied him down as a player until 2023 and for a further three years after that as a coach.

1) Artem Dzyuba (Zenit) – 10 assists
Minutes played: 1453
Mins per assist: 145
The 31-year-old 6ft 5in forward has scored nine goals to supplement 10 assists for Zenit, already matching his Russian league goal haul from last season in fewer than half the number of matches. In three Champions League games so far, only 10 players have created more chances than the Zenit veteran. Despite his age, Dzyuba’s productivity has caught the eye of clubs across Europe, including Everton, Wolves, Palace and Inter Milan.

The stat leaders from the third round of Champions League group stage matches — Artem Dzyuba's 11 aerial duels won vs RB Leipzig is a record in a Champions League match this seasonhttps://t.co/z2YUS3pDIM pic.twitter.com/JSBgPiCicI