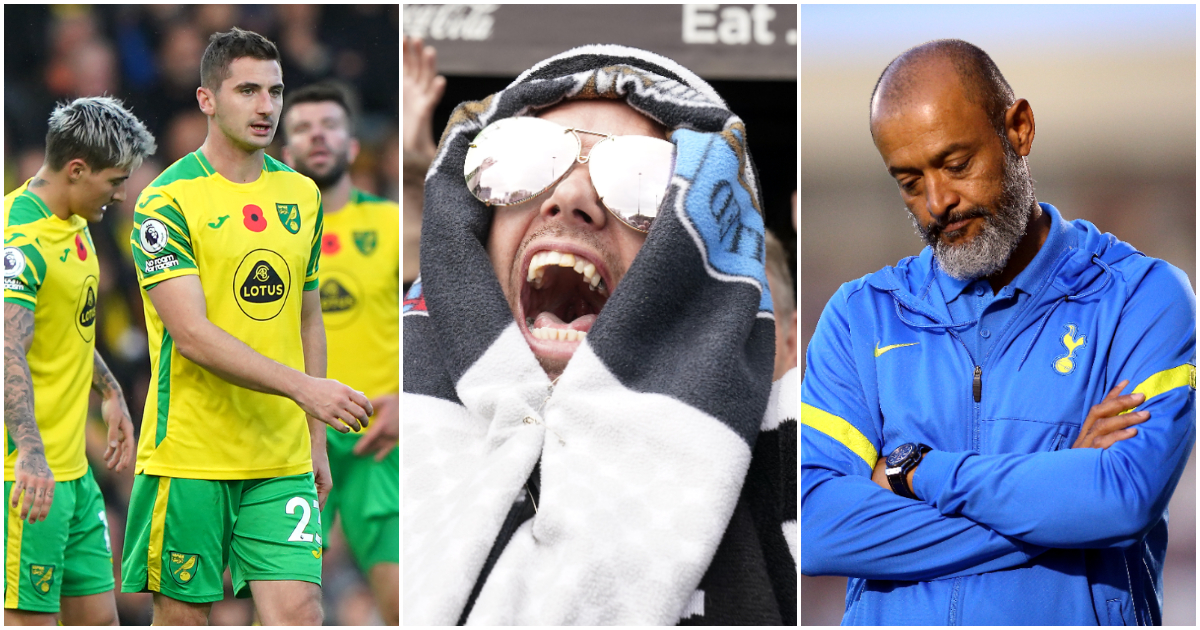 Spurs have moved decisively/callously to rectify perhaps the season’s most glaring error, dropping it a few places down this list as a result. Daniel Levy is a lucky b***ard, he really is. But what other errors have been made this season? Here are precisely nine other howlers beyond the Nuno farrago…

10) Leeds freewheeling carelessly into their second season
Giddy on the highs of their successful return to the Premier League last season, Leeds blithely dismissed concerns that second-season syndrome could befall them.

Yet while their defending has remained as cheerfully incompetent as ever, they’ve forgotten how to score goals. They’ve only managed one more goal this season than Spurs, a team who in the latter days of Nuno’s reign (more to come there) stopped actually trying to score goals altogether.

Now some sections of the Leeds fanbase are mired in debates over whether second-season syndrome is even a thing or just a convenient myth cooked up by Big Football Media, even as their campaign is mired ever further in its iron grip.

9) Villa selling Elvis and buying the Beatles
Villa were rightly praised for their handling of The Grealish Situation in the summer and ‘mistake’ is probably the wrong word because really, what else could they do once it was clear City would meet the £100m trigger? It’s not even that they spent the money badly. They even spent it predominantly in advance to avoid getting their pants pulled down on prices.

And it’s not even that those players they brought in have been bad. It’s just that something has been lost. Villa are discovering like Spurs and Liverpool before them that replacing a talismanic figure with multiple players just doesn’t work. You soon discover that your genius player had intangible contributions way beyond their mighty impressive raw numbers. And it’s all left Dean Smith in bother.

Villa also represent the perfect rejoinder to those who say Spurs should have cashed in on mardy Harry Kane. Watching him sulk through the first few months of the season makes it seem more tempting than ever, but look at what’s happened to Villa with good reinvestment of their windfall. Just imagine what a mess Spurs would have made of it.

8) Leicester’s failure to sort their defence
It seems churlish to criticise Leicester at all really given the way they punch above their weight and the cruelty of their two late collapses from near certain Champions League qualification.

But that’s also kind of the point; a team that has spent vast swathes of the last two seasons in the top four is currently absolutely nowhere near that level.

Last season’s collapse came because of defensive frailty, with 11 goals conceded in the last four games. Jannik Vestergaard was brought in to try and address that in the summer but has failed. He’s been a bit part in a defence that is still failing. It’s not just that they’ve conceded 17 goals in 10 games – although that is bad – it’s that they are conceding consistently. Leicester have shipped at least two in seven of those 10 games. They’re just not giving themselves a chance.

7) Norwich City
Without wishing to go full Jamie O’Hara, there is little more to say. Norwich City. That’s it. That’s the mistake.

6) Absolutely everyone saying that spending a whole summer over signing Aaron Ramsdale for £25m was an inexplicable waste of both time and resources
Yeah. Er… whoops, I guess? We are very sorry and promise to trust the process from now on.

5) Manchester City failing to buy a striker
In all competitions, City have scored 41 goals in 16 games, but have been shut out altogether in five of those games, costing valuable league points and ending their Carabao Cup monopoly. Sure, more often than not the dazzling skills of assorted false nines – your Fodens, your Grealishs, the Mahrezes of this world – will be more than enough to get the job done. When City click they’ll rattle up the fours and fives and sixes no problem. But then along come Southampton or Crystal Palace and suddenly you’ve dropped five home points that you have no business dropping and the decision not to buy a recognised striker at all looks less like a bold and audacious thumbing of the nose at tactical orthodoxy and more like arrogant negligence for a team of City’s resources. Even 10 league games in, those five points dropped in supposedly straightforward home games represent the difference between sitting alongside Chelsea at the summit and languishing in third.

4) Spurs appointing Nuno
There is partial credit for acknowledging the mistake and addressing it swiftly, dropping them from a potential top spot (bottom spot?) here, but only in the same way you give someone credit for changing the sheets of a sh*tted bed rather than just hoping the smell and uncomfortable, permeating dampness will just disappear on its own. Spurs have also got themselves some very expensive new sheets. Let’s just hope the mattress isn’t completely ruined. Not sure where we’re going with this now but in summary: appointing a defensively minded Portuguese to put right the myriad errors of the far more qualified defensively minded Portuguese was never likely to be a winning plan and so it proved. Spurs actually played worse and more drab football under Nuno than they did under Mourinho. Which really is something.

3) Manchester United beating Spurs 3-0
All right, that’s a touch facetious and we hate to be that. Losing 5-0 to Liverpool was probably a bigger mistake than a thumping 3-0 win in response, really. But the consequences of that fine 3-0 win at Spurs could be far-reaching. Ole Gunnar Solskjaer is once again safe from the sack – if indeed he is ever truly at risk of it, which apparently he is not – and more importantly the man best placed to make Manchester United what they could and should be is now going to be doing that at Spurs instead.

Absurd as it sounds, this is a 3-0 win that across the season(s) could hurt Manchester United and prove to be a watershed moment for their opponents. United should have just stuck with what they had at 1-0. It’s not like Nuno’s Spurs were ever going to score a goal. Now they’ve f***ed themselves and rejuvenated what is, whether United like it or not, a rival.

2) The general response to the Newcastle takeover
With honourable exceptions, it’s been f***ing nauseating. Newcastle fans, drunk on years of being told they are a unique and special fanbase who are just frankly better and more deserving of success than other fans, have greeted the news for the most part with unadulterated glee, dismissing the concerns and complaints from elsewhere as jealousy or sour grapes or some sort of anti-Newcastle agenda. If that’s vaguely understandable from football supporters, the very nature of fandom being an incompatibility with objective or sometimes even rational analysis, it’s less so from the media.

Those who wailed and gnashed their teeth at the evils and horrors of the Super League have generally (again, honourable exceptions exist) greeted the arrival of the Saudis at Newcastle with the same glee as the fans, capped off by Sky Sports turning the first post-takeover Super Sunday into a four-hour love-in for the new regime.

1) The new owners’ response to the Newcastle takeover
This is in very real danger of becoming a total mess. Newcastle fans and the UK media may have abandoned all moral decency for something that might not even work.

The early signs are not good, and widespread assumptions that “doing a City” was an inevitable consequence of this takeover are starting to look a touch shaky. Relegation remains a clear and present danger, everyone involved is talking far too much out of a desire to show how important they are, scuppering at least one potential managerial appointment, and there is a chronic lack of certainty and coherence on anything. Allowing Steve Bruce to remain in charge for one game and then sacking him managed to be the worst of both worlds, harshing the initial buzz while also failing in its supposed goal of showing some kind of abstract respect and not acting too hastily.

The backtracking over whether supporters should wear “culturally-inspired clothing” was another example of people trying to second-guess their way out of Newcastle’s new-found predicament and managing to make it worse.

It may be that January comes along and with it half a dozen shiny new signings and a rise to 12th in the league before a sustained period of glory arrives on Tyneside. But at the moment it just looks more likely that the club will be absolutely rinsed by agents.

And Newcastle cannot afford a bad January. They are already six points off safety and right now every team above them look likely to be further away if anything in two months’ time.