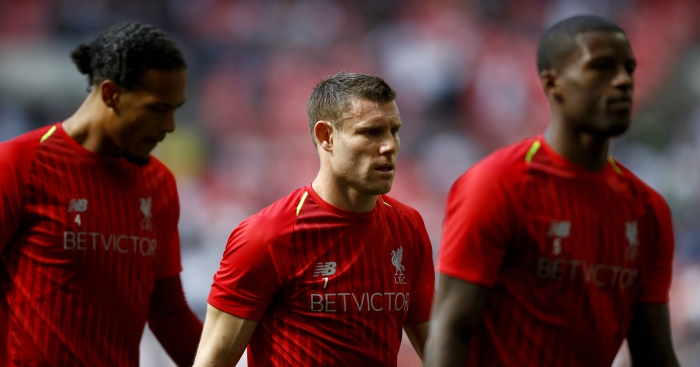 10) Aaron Wan-Bissaka
It’s been a rapid ascent for the young Palace full-back since being thrown in for his debut amid an injury crisis in February. In his first five games, Wan-Bissaka faced Tottenham, Man Utd, Chelsea and Liverpool.

So impressed was Roy Hodgson that he made the Croydon-born academy graduate his starting right-back at the beginning of the campaign. In less than two months, Wan-Bissaka has earned his second Palace player of the month award and made his England Under-21 debut on the back of a string of impressive performances. The only blip: a red card late on against Liverpool, but Hodgson immediately restored the youngster after he was missed while Palace lost 2-1 at home to Watford.

Not bad considering a year and a half ago, winger Wan-Bissaka had never even played in defence.

9) James Maddison
Aidy Boothroyd reckons Maddison isn’t ready for the senior set up just yet. But if the 21-year-old maintains the form he has shown in the opening weeks of his maiden top-flight campaign then Gareth Southgate will surely be taking a look at the attacking midfielder before the end of the season.

Maddison made his debut at Old Trafford on the opening weekend and having climbed through the Football League to reach the top flight, the summer signing from Norwich for £25million looked immediately at home on the biggest stage. He is Leicester’s joint-top scorer with three goals and and two assists but the fact he has only finished one game suggests Boothroyd is right to suggest Maddison is ‘a late developer’.

Which begs the obvious question: how good could he be? Maybe he’s not the finished article, but with Southgate looking for a creative midfielder, Maddison must be one of the next in line for a call-up.

8) Bernardo Silva
David Silva is f*cking brilliant. But even he can’t go on forever. The City playmaker reckons he has got this season and next left in him, while Pep Guardiola already has doubts whether he can play two games a week while maintaining his impossibly high standards.

If City are beginning to contemplate life after the Spaniard, there is at least a Silva lining up in wait. Bernardo has been one of City’s best performers in his sophomore season having spent a year getting his feet under the table at the Etihad. He has played the third highest number of Premier League minutes of any of Pep’s outfielders, all the while chucking in a couple of goals and an assist, as well as a goal in the Champions League.

Bernardo Silva’s form has been enough to keep Leroy Sane sat on the bench for much of the season. Even when Sane started against Fulham, Silva moved into the middle and turned in a man-of-the-match performance.

7) Joao Moutinho
Singling out a Wolves player for inclusion was the hardest task in compiling this list. It was tough enough identifying which unit of Nuno’s side has been the most influential in their comfortable start to life back in the Premier League. Even when opting for the midfield, choosing between Moutinho and Ruben Neves is a coin toss.

Neves was absolutely brilliant last year and he has demonstrated that he belongs at the highest level in his opening seven games. There were few doubts over Moutinho’s quality but the 32-year-old has taken to English football seamlessly. He and Neves were more than a match for the midfield trios of Man City and Man Utd, while Moutinho has led the way for Wolves’ starters in terms of key passes, crosses and pass accuracy.

Moutinho put on a clinic for Paul Pogba, Marouane Fellaini and Fred at Old Trafford and all of United’s underperforming midfielders could learn a thing or two from the 113-cap Portugal veteran’s dynamism, work-rate and passing quality.

6) Ryan Fraser
“It is going to be a different me this season,” said Fraser in the opening week of the season. “I don’t want to be a bit-part player. I want to be the game changer who takes it by the scruff of the neck.”

The pocket rocket on Bournemouth’s left wing, in his sixth season with the club after joining from Aberdeen for £400,000, has remained true to his word with three goals and two assists from his opening seven games. Chuck in another goal and an assist in the Carabao Cup and it leaves the Scotland international well on the way to matching last season’s output before we reached October.

Standing tall at 5-foot-4 – the Premier League’s smallest player, two inches shorter than N’Golo Kante – Fraser has established himself as Eddie Howe’s main man. He’s tough little b*stard, with his most effective performance – two goals and an assist against Leicester – coming despite the fact he was struggling with a hamstring injury.

5) James Milner
When Liverpool spluffed close to £100million on their midfield, presumably they too were underestimating Milner – something the Yorkshireman has had to endure throughout the latter years of a career that really should be winding down by now.

Instead, the 32-year-old is still running further than anyone else and in the form of his life – half of which has been spent in the Premier League. As Steven Gerrard observed: “On current form he is the first name on the team sheet.” Even as recently as a year ago, he had to scrap to be on it at all.

But, as Winty summised, if there’s something Milner offers in addition to experience, versatility, technique and the impression of possessing three lungs, it’s sheer, relentless bloodymindedness. He knew when to walk away from England but if he wants another Liverpool contract, he’ll almost certainly get one.

4)  Roberto Pereyra
The Watford attacker must be doing something right to be called up into the Argentina squad with the likes of Lionel Messi and Pablo Dybala.

It’s been three years since the former Juventus star was last called up for national service but his form this term – which has been an extension of his contribution towards the back end of last season – has made everyone sit up and take note. Since being shifted to the left by Javi Gracia, Pereyra has notched seven goals, including three in seven appearances during the Hornets’ fine start to the season.

The new, slimline Troy Deeney has impressed this season to the extent that he too was being discussed as a possible international call-up. But Pereyra has been the stand-out performer, showing why the club were so content to allow Richarlison to leave.

3) Aleksandar Mitrovic
The Fulham striker has netted the same number of goals as Harry Kane and Sergio Aguero but he wasn’t good enough for Newcastle, apparently. “For us, he was not the kind of player we were looking at. That’s it,” said Rafael Benitez earlier this month but the sight of the Serbia centre-forward rattling them in for the Cottagers must stick in the Spaniard’s craw.

Mitrovic’s five-goal haul is one more than his former team have managed all season, with the shot-shy Magpies’ languishing in the bottom three. Fulham aren’t exactly flying and without Mitrovic’s goals, they would be down in the mire with Newcastle. But the £23million centre-forward has carried his side at times, most notably against Watford when – after a dreadful first-half display – Mitrovic took the fight to the Hornets before netting a crucial equaliser.

2) Virgil van Dijk
“I knew Van Dijk was a good player, but he is better than I thought,” said Jamie Carragher earlier this season, speaking for pretty much all of us. “There isn’t another centre-back that ticks almost every box in terms of presence, pace, strength and ability on the ball.”

Van Dijk’s individual assets are obvious, but it’s the difference that he’s made to the whole defensive unit that is most stark. With the 27-year-old leading the back four, Klopp’s side haven’t conceded a goal at home in the league since February.  So far this term, they’ve conceded three times in the Premier Legaue. At the same stage last year, they had shipped four times that number.

The addition of a competent goalkeeper is doubtless a contributing factor but the improvement began before Alisson’s arrival. In the 23 Premier League games before Van Dijk’s debut last season, Liverpool conceded 28 goals. In the 22 games since, that figure has dropped to 13. No wonder Carragher is already penciling him in for a place in Liverpool’s greatest XI alongside Alan Hansen.

1) Eden Hazard
While the summer’s headlines were being grabbed by Liverpool spending big and Ed Woodward refusing to spend at all on a centre-back, the most astute piece of transfer activity went somewhat under the radar.

By persuading Hazard to stay and work with Sarri, Chelsea went from top four challengers to title contenders. The new manager’s methods have had a quicker impact than perhaps even he expected, but Hazard’s presence provides Sarri’s side with the X-factor required to challenge for all the trophies Chelsea can possibly win this term.

It seems most likely that Chelsea have taken the same approach as Sir Alex Ferguson used with Cristiano Ronaldo. “Give us one more year,” was presumably the Blues’ response to the Belgium star telling the club he wanted to move to Spain upon returning from the World Cup. It is proving a mutually beneficial arrangement. With six goals and a couple of assists already, Chelsea are reaping the profits from Hazard going all out to prove that he deserves similar plaudits to Ronaldo and co all the while making himself more attractive to Real and Barca by running down another year on his contract.

Chelsea will miss him when he’s gone and so will we. But we’re going to enjoy the Premier League’s finest talent while we still can.