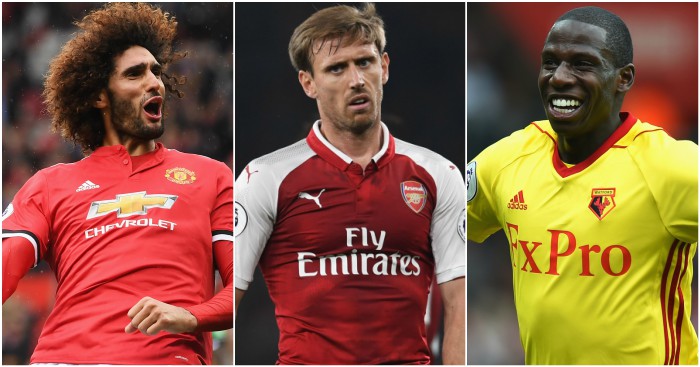 10) Emre Can
Of course Emre Can is turning in better performances – the Germany midfielder is firmly in the shop window, with his contract due to expire at the end of the season, and there’s the small matter of a World Cup place to play for.

Juventus have been most heavily linked with Can, while Manchester United were also said to be monitoring his situation. If they were watching him last season too, then it’s a wonder they weren’t put off completely. “Last season was not my best season, to be honest,” admitted the 23-year-old, who finished the campaign far better than his pre-Christmas form had promised.

Can wants to add goals to his game, and though he has yet to open his account in the Premier League, he has notched twice in the Champions League and also has a couple of assists to his name.

9) Peter Crouch
The striker will be wondering what he has to do to get in the Stoke XI. Crouch has come off the bench five times this season, scoring twice in the Premier League in his 101 minutes and adding another in the League Cup. But still he is likely to find himself back among the substitutes when the Potters return to action this weekend at Manchester City.

At 36, he is the oldest player to net in the Premier League, showing Saido Berahino – who hasn’t scored in almost 600 days – how it is done, as well as Jese and Eric Choupo-Moting. Despite his years, though, Crouch isn’t happy just being the wise old head, admitting he is “frustrated” at his lack of starts. “But as a sub coming on he gives the opposition something more to deal with,” explained Mark Hughes, suggesting Crouch had better get used to playing cameo roles.

8) Marouane Fellaini
Marouane Fellaini has earned the trust of all three of his managers at Manchester United and now he has won over Jose Mourinho, many fans are also having to reassess their view on the big Belgian.

Perhaps because of the criticism he has received from his own fans – he was booed at Old Trafford last season, remember – Mourinho has gone out of his way to praise Fellaini in public. He told Galatasaray that they have more chance of signing him as manager than tempting United into parting with the ex-Everton utility man. “He’s a lot more important than you can imagine,” Mourinho said later. “I feel weaker without Fellaini in my squad, doesn’t matter if it’s on the pitch or on the bench. I need him.”

For Mourinho, Fellaini would obviously run through a brick wall – or at least elbow his way through it – and he continues to repay his manager’s faith. The fact he is preferred as Paul Pogba’s stand-in rather than last year’s player of the year Ander Herrera speaks volumes for his rise in status at Old Trafford.

7) Raheem Sterling
Many people questioned Pep Guardiola’s wisdom in vetoing any deal that would have seen Raheem Sterling move in part-exchange for Alexis Sanchez, but the England speedster has justified his manager’s faith with a flying start to the season.

Sterling has consistently been criticised for his final product, and while there remains plenty of room for improvement, five goals in four starts and two substitute appearances suggests the penny is dropping with the 22-year-old. “I would like him not to believe or think it is already good,” said Guardiola in March. “He can be better, believe me. Still he makes mistakes in the simple, easy things. When he improves that… wow.” Six months on, Sterling’s form is certainly heading in the right direction. We’re nearly at the ‘wow’ stage.

6) Nacho Monreal
The left-back looked to be finished at Arsenal until Arsene Wenger was forced to introduce a back three. Even then, it was suspected that the Spaniard would be making an exit this summer as part of the exodus of players that never really happened.

But since then, Monreal has played every minute in the Premier League. No one in the division has made more interceptions (he and Steven Defour have made 22 each), while he capped another fine display last week with the opening goal in the 2-0 win over Brighton. Nacho, Nacho man.

5) Ben Mee
The 28-year-old still has England ambitions: “I look at the squad and I don’t see any left-sided centre-halves in or around the Premier League who are English.” That may be ambitious given the competition but his early-season form will certainly have made Gareth Southgate take notice.

Mee and central defensive partner James Tarkowski have made more blocks than anyone in the Premier League, with the pair playing a huge role in Burnley’s splendid start that has taken in wins over Chelsea and Everton, and 1-1 draws at Liverpool and Tottenham.

4) Abdoulaye Doucoure
Abdoulaye Doucoure was Watford’s best-kept secret during the second half of last season when he was finally given an opportunity by Walter Mazzarri. The midfielder was sometimes inconsistent with his passing and Mazzarri said he needed to improve going forward, but the signs were certainly promising.

The 24-year-old has since made himself one of the first names on Marco Silva’s team-sheet. His partnership with Nathaniel Chaloabah has been a huge factor in the Hornets’ impressive start to the season, as have Doucoure’s three goals. The former Rennes box-to-boxer has also improved his distribution. Watford could make a very tidy profit on a player they signed for just £8million if his rate of progress continues.

3) Ben Davies
Life comes at you quick, as Danny Rose will testify. The left-back caused a stink just before the start of the season by saying he is not paid what he’s worth and that Spurs should be signing players he didn’t have to Google. When he gets fit, he might just find himself sat on the bench alongside the anonymous nobodies he was complaining about.

That’s all down to the form of Davies. The left wing-back has established himself as “one of the best full-backs in the Premier League”, according to Mauricio Pochettino, who seems to have the Midas touch when it comes to developing a full-back. As well as stellar performances at the back, no defender in the Premier League has created more chances this season. At Huddersfield last week, he assisted two goals and helped himself to another. In six appearances, he has already matched Rose’s attacking output for the whole of last season.

2) John Stones
Pep Guardiola has been heavily criticised for his refusal to add to his centre-half options in the summer, despite strengthening in every other area. But even with Vincent Kompany’s entirely predictable injury absences, City have looked solid at the back, which is largely due to the splendid displays of Stones.

Guardiola last season discussed a future for Stones as a holding midfielder, which many suspected was a reflection on the room for improvement in his defensive duties, as well as a compliment towards the England star’s comfort in possession. But Stones has appeared almost completely unruffled this term, switching effortlessly from a back four to a back three, and even a back two, as they appeared to play at Watford, such is the advanced role Guardiola’s full-backs are expected to play. Typical of his current form, Stones described the impressive win at Chelsea as “defensively, on a personal note, it was maybe one of the best games I’ve played in”.

1) Anthony Martial
Manchester United fans are having a wonderful time watching Anthony Martial and Marcus Rashford try to outdo each other on the left wing. Rashford’s form is nothing new, but Martial looks an entirely different player to the one who received a couple of very public kicks up the arse from Jose Mourinho last season.

Mourinho has described Martial as ‘happy’ more than once this term and it shows. After a second season in England during which he went through some personal issues in the full glare of the public eye, the 21-year-old appears settled and keen to make up for lost time, despite having only started one Premier League game. He has certainly made the most of his opportunities off the bench, however, scoring three goals – only one fewer than he managed during the whole of last season – which helped him win United’s Player of the Month award, beating off stiff competition during a September in which they won six games and drew another.

He’s now so good that Barcelona want him. Or at least that’s what his agent wants us to believe.