Home All The News Top 10: Reasons De Boer was shown the door at Palace 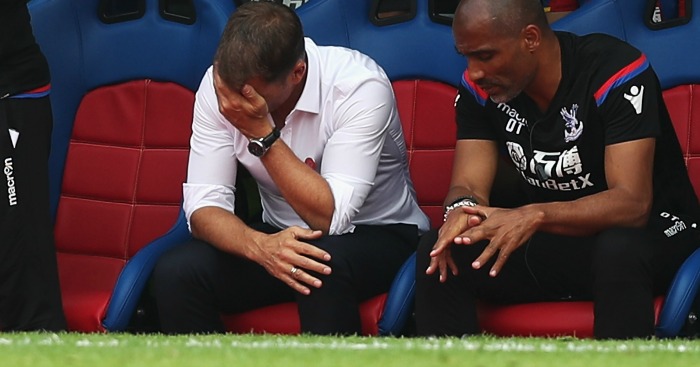 Following Frank De Boer’s sacking as Crystal Palace manager on Monday, stories from his 77 days in charge have leaked with the intention of highlighting why Steve Parish felt he had no choice but to dispense with the Dutchman’s services. Here are 10 of the best…

10) ‘The former Ajax and Inter boss was made aware of cliques in the squad who had been upset by him playing in training, something that baffled De Boer as, if anything, professionals should be motivated at being shown up by a retiree more than 10 years their senior in many cases rather than threatened by it.’ – Ed Malyon, The Independent

9) ‘De Boer would pick balls out of the sky, swivel on the spot and then ping one into the top corner in front of the Palace squad. It was unnecessary and smacked of arrogance.’ – Neil Ashton, The Sun

8) ”Introverted’ is one way to describe De Boer. Those who have worked with the Dutchman over the past 77 days might offer up far less complimentary descriptions. ‘Difficult to get along with,’ said one Crystal Palace source. ‘A bit of a weirdo,’ said another.’ – Sami Mokbel, Daily Mail

7) ‘Immediately some senior players turned against him, players who happened not to be in his plans, but De Boer’s biggest problem turned out to be that these players had the ear of the chairman who, in turn, ensured they weren’t sold. Damien Delaney was not in De Boer’s plans, who wanted him gone, but Parish did not want to sell or release a player who has formed a key part of the dressing room and club in general since being convinced not to retire by Dougie Freedman back in 2012. It created friction.

‘Martin Kelly was not deemed good enough and reacted badly while Joel Ward was deemed too slow to play at wing-back but failed to adapt to being a central defender. Delaney and Kelly were deemed only to be fringe players by the Dutchman but their displeasure with De Boer’s reign got back to Parish and fellow senior officials – which combined with his somewhat ‘cold’ manner, begin to paint a picture of trouble even very early in De Boer’s reign.’ – Ed Malyon, The Independent

6) ‘De Boer wanted to play the Ajax way, to rely on the principles established by the legendary figures of Rinus Michels and Johan Cruyff. It meant playing 3-4-3 … and led to three successive Premier League defeats. Even when he trialled the system over the summer – losing three successive training ground games to Palace’s under-23 side – he stuck with it’ – Neil Ashton, The Sun

5) ‘De Boer met with Palace chairman Steve Parish and sporting director Dougie Freedman on Monday, 28 August. Parish and Freedman left that meeting very underwhelmed and with no confidence that the Dutchman was the right man to turn Palace’s fortunes around. They made contact with former England manager Roy Hodgson and other potential replacements about their availability that week but the club’s focus turned to player recruitment at the end of the transfer window’ – David Ornstein, BBC

4) ‘Ask those close to De Boer and they will tell you Palace did not make enough effort to sign the players he had identified. They will say the club did not trust the manager’s judgment. However, others at Selhurst Park might suggest the players who De Boer wanted had ‘costly mistake’ written all over them… De Boer certainly didn’t have much money to play with following Palace’s heavy expenditure in the transfer market over the past two seasons. But, by the same token, you can forgive the club for not throwing millions of pounds at unproven talent from the Dutch Eredivisie’ – Sami Mokbel, Daily Mail

3) ‘He did not think there was anything wrong with telling Martin Kelly, who began his career with Liverpool, that he was not good enough to play for Palace. After sending him to train with the Palace Under-23 side, Kelly was suddenly brought back into the first team squad for the 1-0 defeat at Liverpool.

‘When Joel Ward was overlooked for selection in a training ground 11 v 11, the popular right back was told to watch the game to learn how to play wing back. When he did play there for the first time, just days after being told he was up for sale, Ward was all over the shop against Huddersfield on the opening weekend’ – Neil Ashton, The Sun

2) ‘De Boer’s failure to have any basic organisational skills, even down to the players who would be eligible to play in last week’s Carabao Cup tie against Ipswich, soured relations. When he decided to play Timothy Fosu-Mensah, 19, and Jairo Reidewald, 20, in the centre of defence, De Boer was warned that they would not be physically equipped in the Premier League. De Boer thought he knew best and played them anyway’ – Neil Ashton, The Sun

1) ‘De Boer was not concerned in principle by the hiring of Dougie Freedman as sporting director but felt that a former manager of the club coming in just a week before the end of the transfer window while the coach was enduring a difficult start boded poorly for his chances. De Boer backed himself to succeed at Palace despite getting lukewarm messages back, but the biggest sign that he had no job security was when a friend asked him in the wake of the Swansea defeat whether he would be staying in charge and he simply answered “I don’t know.”’ –  Ed Malyon, The Independent