Home All The News Top 10: Reasons Ronald Koeman was culled at Everton 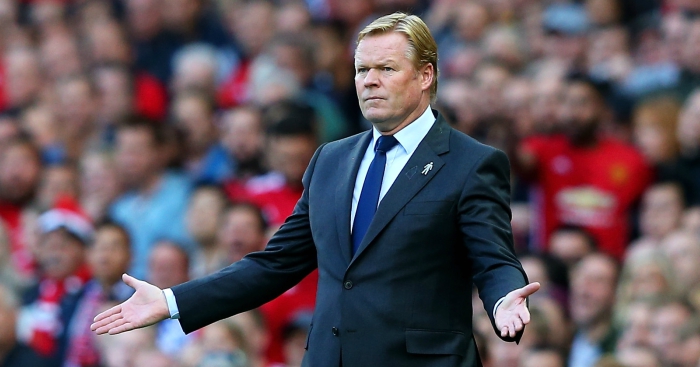 After Everton brought about Ronald Koeman’s demise after 16 months in charge of the club on Monday, stories of his reign have surfaced from the national and local media. Here are ten of the best reasons that Everton felt they had no choice – and it isn’t because Joel Ward felt he was shown up in training this time…

Actually, while you’re here, you might as well catch up on who Everton are lining up as Koeman’s replacement. Head this way. Then listen to who Jamie Carragher reckons they should target.

10) ‘Frequent changes in personnel and formation plus nine half-time substitutions in the last 15 games demonstrated the Dutchman’s extensive search for a winning formula – and his selection mistakes – but he generated confusion throughout the ranks rather than results. Koeman’s team this season have had no identity and precious little threat, pace, width or balance. Belief has evaporated too, unsurprisingly after a run of seven defeats in 11 matches and with Everton third from bottom of the Premier League. It was painfully absent among supporters on Sunday even after Wayne Rooney had swept Everton into a surprise lead’ – Andy Hunter, The Guardian.

9) ‘Koeman enjoyed a magical career with the ball at his feet, conquering Europe with his country in 1988 and with his club in 1992, but the frequent references on Twitter to such feats hinted at an ego to rival the size of his footballing talent. It is hard to recall Zinédine Zidane, Pep Guardiola or Carlo Ancelotti eulogising their own glittering playing days. They focus on the present, on nurturing players, not feeling a desire to take a self-admiring stroll down a memory lane of mirrors.

‘Barcelona are the old flame that never goes out for Koeman. When Everton stayed at Sopwell House, near St Albans, before last December’s match away to Watford, Koeman stopped in the hotel’s corridor of fame to admire the photograph of himself with Johan Cruyff when Barcelona used it as their base before the 1992 European Cup final at Wembley. Last May, Koeman hailed the 25th anniversary by posting a snap of him settling down to watch a “documentary about my goal”. As has been frequently pointed out, his car carries the letters BAR. It’s not a number plate, it’s a gilded résumé’ – Henry Winter, The Times.

8) ‘One of the criticisms of Koeman, a cold and calculating realist, was that he had no bond with Everton and was simply passing through on his way to better things’ – Phil McNulty, BBC.

7) ‘Ronald Koeman was overseeing the final preparations for Everton’s game with Arsenal when he resorted to barking out one instruction repeatedly during training at the club’s Finch Farm base on Saturday.

‘”Long balls, long balls,” came the Dutchman’s command, prompting quizzical looks from members of his first-team squad as a practice game ensued. Everton had spent all summer acquiring No 10s at no little expense – Gylfi Sigurdsson, Davy Klaassen and Wayne Rooney to go with Ross Barkley and others – and here was the manager instructing his team to bypass them all and play direct despite their failure to sign a new target man during the summer transfer window’ – Paul Joyce, The Times.

6) ‘The players liked his no-nonsense approach and even after what proved to be his final game, that ruinous 5-2 defeat to Arsenal, some were still talking about how much they admired him as a character and felt the blame for the disastrous run of result should have laid with them. ‘We’ve been s***,’ one said bluntly.

‘That may be so but for the money that Koeman was being paid – and the money that Everton invested during the last transfer window – it was down to the manager to find a solution when things were going wrong but, increasingly, he looked to be a man without answers’ – Dominic King, Daily Mail.

5) ‘Life has replicated art at Goodison Park, with Koeman cast in the role of Cool Hand Luke. The difference is that Paul Newman’s character boasted charisma and charm, while Koeman has been aloof, even arrogant – and he never once connected with the influential Everton support base.

‘For a man who always spoke openly, honestly and candidly at press conferences, he failed to communicate with the fans. There was no sense of style or pattern of play he was trying to implement. There was no sense of the club’s rich and vibrant history; it was always “Everton” rather than “we”‘ – David Prentice, Liverpool Echo.

4) ‘From the beginning, Koeman never really sounded like he wanted to stick around – his comments about ambitions to manage Barcelona one day adding to that impression. There had been suggestions that he had not tried to embrace Everton in the way previous managers had – that he was distant and used his brother and assistant manager Erwin Koeman to communicate with staff.

‘Then, last Christmas, days before losing to Liverpool in the Merseyside derby, he posted a picture on the internet of his tree decorated exclusively in red. These types of moments chip away at trust. It is fair to say he never seemed to really get what Everton was all about. It is fair to say he will be ok with a red Christmas tree this year’ – Simon Hughes, The Independent.

3) ‘For a manager, this self-appreciation society is not an issue when the team excels – it’s reflecting their leader’s self-belief – but, when results and form dip, players can feel patronised, annoyed, even aggrieved by such a personality trait. The Koeman parable is a lesson to younger managers of the importance of building relations with players, of making them feel loved. It is a criticism levelled at another maestro-turned-coach involved at France ’98, England’s Glenn Hoddle.

‘Players will accept criticism so long as it is dispensed fairly. It was noted at Everton that Koeman was inconsistent in his handling of players. Davy Klaassen has been dreadful and Gylfi Sigurdsson disappointing, yet Koeman praised the two individuals signed during his tenure. A local hero he inherited, Ross Barkley, was never accorded such support’ – Henry Winter, The Times.

2) ‘The rules and regulations that he imposed on his arrival from Southampton in the summer of 2016, such as bringing forward training by an hour to 9am – ensuring the school run was out and hard work was in – and decreeing that players could only eat lunch with his blessing, were taken as welcome departures from the Roberto Martínez era. Everton’s players preferred Koeman’s straight talking.

‘Yet there has been less of that this season as the downward spiral has taken hold, one which had deposited Everton into the relegation zone by the time that Aaron Ramsey and Alexis Sánchez were putting a layer of gloss on Arsenal’s runaway 5-2 success in front of emptying Goodison Park stands.

‘Where last season Koeman would go out of his way to explain why he substituted players, particularly younger ones making their way in the game, this term he has been more uncommunicative’ – Paul Joyce, The Times.

1) ‘Put simply, Koeman never had a connection with Everton. He cut himself off from the figures around the training ground who are part of the club’s fabric and give Everton its identity and never bought into the history.

‘There is a story from a sportsman’s dinner, held last May at the Titanic Hotel near Liverpool waterfront, when Koeman was the guest speaker. A crowd of enthusiastic Evertonians had gathered and were eager to hear what was next. His talk, though, left them puzzled. The 54-year-old told them to be realistic and understand their position in the table but he never grasped the mood. They wanted him to give them reason to dream. Instead he left them feeling despair. It is why he finds himself back on holiday’ – Dominic King, Daily Mail.