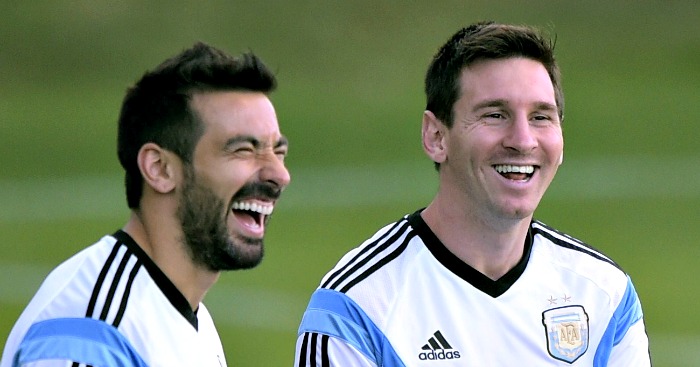 The January transfer window is over. Now to get these football matches out of the way so we can concentrate on the real sport: the summer window. Here are the ten most ridiculous rumours of the winter.

10. Scott Dann to Chelsea
With news of John Terry’s imminent departure/potential stay/obvious attempt at ensuring everything is about him at Chelsea, attention turns to who could replace him in the summer. A four-time Premier League winning captain of the club, the central defender has 477 Premier League appearances to his name, and will breach the 700 mark in all competitions later this season. These are big shoes to fill. Only a particular form of sh*thouse will do.

Fortunately, the Sunday Mirror brought us news of Terry’s replacement over a fortnight ago. Even before the announcements and counter-announcements, Steve Stammers revealed that the club had lined up the man to usher out the 35-year-old. Was it a young, fast, European centre-half? A cultured title-winner? Scott Dann? If you answered with the latter, congratulations.

Not only was Dann linked with Chelsea by the Mirror, but the wage he would be offered was revealed. There would be no more £60,000 a week at Crystal Palace. No siree. Nope. Chelsea were willing to double his wages. They were willing to pay Dann £120,000 a week. Apparently. Stammers also reported that Dann was 27 years of age. He turns 29 in under a fortnight.

To be fair to Don Balon, one part of their transfer puzzle has fallen into place. The Spanish publication reported at the start of January that, as part of Pep Guardiola’s arrival at Manchester City, the coach wanted his countryman Ander Herrera to cross the Manchester divide and make the Etihad his new home.

It would be nice to think that we won’t hear from Don Balon again after such a poor record of reporting in the transfer window, but we know that they will return with a vengeance in the summer. And everyone will lap it up. If Don Balon have proven anything this month, it’s that British outlets are not alone. Foreign ones are just as prone to bullsh*t.

8. Harry Kane to Bayern Munich
For those who reserved even the smallest fraction of doubt concerning Harry Kane’s authenticity, our fears were truly realised in early-November last year. You can thank The Sun for that.

Their man Mike McGrath scooped a big tasty EXCLUSIVE as the month rolled in and the countdown to the January transfer window ticked on. He reported that Bayern Munich had joined the £50million race for Kane.

‘The German giants have watched the Spurs striker THREE times,’ McGrath reported back on November 1. THREE times, you say? Get the #WillkommenKane banners at the ready.

It started with The Sun. It always does, doesn’t it? They claimed back in October that Chelsea, Manchester City and Manchester United had made ‘informal approaches’ with regards to the Barcelona forward’s future. By November, the Daily Star had an EXCLUSIVE, with Arsenal revealed to be the Premier League side that Messi wanted. Just over a week later, and Manchester City were offering the 28-year-old an £800,000-a-week contract at the Etihad. Cue the greatest Photoshop of our times:

£800 a week? Bargain. And how nice of Messi to copy the tattoos of his countryman Sergio Aguero to promote solidarity ahead of the move.

6. John Stones to Real Madrid and Barcelona
The Daily Mail’s report that Barcelona, Real Madrid, Chelsea and Manchester City would engage in a £50million battle for John Stones seemed unlikely when it was reported on January 23. Just over a week on, it looks utterly preposterous.

Which of Sergio Ramos, Pepe or Raphael Varane was Stones supposedly replacing in the central defensive pecking order at Real? And the reported arrival of the 21-year-old would hardly have left Thomas Vermaelen and Marc Bartra worrying for their Barcelona futures, never mind Gerard Pique and Jeremy Mathieu. Amidst an influx of high-profile mistakes, Stones had somehow because an even more precious commodity than before.

5. Wayne Rooney to China/Chelsea
When does an EXCLUSIVE become a WORLD EXCLUSIVE? When The Sun realise that China is not a city just north on London, that’s when.

Back in November, Phil Thomas broke the news that Wayne Rooney could be headed to China. The Manchester United and England captain, having just turned 30, was expected to surrender his £300,000-a-week contract at Old Trafford, uproot his young family to a country thousands of miles away, and play in the Chinese Super League, a competition that was founded in 2004, the same year Rooney joined United.

Two weeks prior, the Daily Mail were among many reporting that Rooney had been offered £75million to team up with his former national team manager Sven Goran Eriksson at Shanghai SIPG. They claimed neither EXCLUSIVE nor WORLD EXCLUSIVE.

Still, some were not satisfied by these revelations. In a sad sign of modern football reporting, The Independent and the Metro were the two British outlets who claimed that Chelsea were the frontrunners to sign Rooney in November. The story was based on odds from Sky Bet. Oh for fu…

In fairness to Hull’s club-record purchase, Hernandez has 15 goals in 23 Championship games this campaign. But still, really? The claims came from Tuttomercatoweb, who reported that Arsene Wenger was a fan of the 25-year-old. With Arsenal fighting for the Premier League title, a maiden Champions League and a third consecutive FA Cup, a striker from the second tier was being lined up. If this was the alternative to the daily updates on Karim Benzema’s protracted move to the Emirates, then thank you; we were amused.

Liverpool will look to defend their title of ‘odd ones out’ in the summer after being linked with Robert Lewandowski throughout the winter. The Reds have neither the money nor the quality to tempt one of the world’s leading strikers to the club. But that did not stop the transfer rumours.

It is no coincidence that the first rumour linking Lewandowski to Liverpool surfaced on October 11 last year. Jurgen Klopp, Lewandowski’s manager at Borussia Dortmund, had been appointed manager at Anfield just three days prior. The Daily Mirror expected his arrival to persuade Lewandowski to leave perennial Bundesliga champions and Champions League contenders Bayern Munich for a club who finished sixth in the Premier League last season. Such is the Klopp effect.

Just a week ago, the Liverpool Echo reported that the Reds were willing to rival Real Madrid – who had bid £75million – to land Lewandowski. Will the madness ever stop?

Yet so it came to pass. On November 12, football reporting died. The Daily Mail told us that Barcelona and Real had planned on sending scouts to England’s friendly with Spain to watch Vardy that month, but the Leicester striker had been ruled out with a groin injury. Then in the midst of his record-breaking run, Vardy had scored in nine consecutive Premier League games, and topped the scoring charts by a fair margin with 12 strikes in as many games. Vardy had five goals in 34 top-flight appearances before this campaign, but no bother. Form is permanent, class is temporary.

Now 29, Vardy has two goals in his last ten games. But we should never forget the year he was linked with the world’s two biggest clubs, or with a move to Chelsea or Manchester City for £30million. Never forget.

1. Everyone to Real Madrid
You thought transfer deadline day was quiet and underwhelming, didn’t you? You were under the impression that Stoke had made the biggest signing of the window, and that Steven Fletcher moving to Marseille was the story. Have you forgotten how Real Madrid signed Eden Hazard for £80million, purchased Sergio Aguero for £70million, and then splashed out £185million on David de Gea, Paul Pogba and Robert Lewandowski, sending Jim White into a coma? Silly you.

What do you mean none of that happened? Has anyone broken the news to Antony Kastrinakis? The Sun’s European football ‘expert’ scored the biggest EXCLUSIVE of the January transfer window by far just a fortnight ago. With Real Madrid’s FIFA-imposed transfer ban having been announced on the afternoon of the previous day, Kastrinakis worked himself into overdrive to source his massive pool of Real Madrid contacts. Within hours of Real Madrid learning of the transfer ban, they had worked out their plans and helpfully told Kastrinakis, who duly slapped it on the back page of the next morning’s newspaper. Real Madrid were signing everyone. What a scoop.

Real Madrid did not sign a single player in the whole of the January transfer window. What happened, Tone?