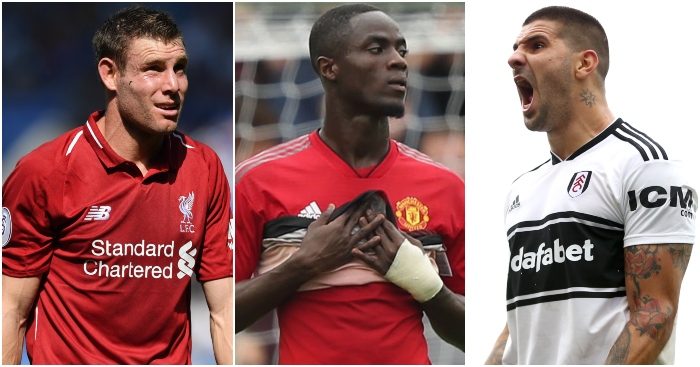 10) Wayne Hennessey’s consistent form
Few players in recent years have split the Crystal Palace support like their goalkeeper. Even Roy Hodgson wasn’t initially convinced by the Wales No.1.

Reflecting on Hennessey’s form during his first year in charge at Selhurst Park, Hodgson said: “He started poorly unfortunately, which was perhaps unfortunate for him as well, because the team wasn’t doing that well either… At Christmas, or soon after when we negotiated to sign Vicente Guaita, he wasn’t in the best period.”

There were signs of improvement at the back end of last season after Dean Kiely had started work as goalkeeping coach at Palace, but consistency has always been a problem. Yet with Guaita’s presence offering a daily kick up the arse, the 31-year-old has emerged as one of the Eagles’ best performers this season. In fact, he’s been one of the best in the top flight.

9) Liverpool’s best midfielder is James Milner
Jurgen Klopp spent almost £100million on new midfielders in the summer, yet here we are, eight games into the season and Fabinho and Naby Keita are still being made to sit and watch how it’s done.

Milner may be closing in on his 33rd birthday and his 16th year in the Premier League but the midfield machine is operating as efficiently as ever. “I don’t want to judge his career but it feels like it’s the best moment of his career,” said Klopp earlier in the campaign and all the evidence suggests the manager’s instinct is correct.

Coming on the back of 2017/18, when he broke the record for Champions League assists in a single season, Milner has started the new campaign in similar vein. If anyone, like Gary Lineker, still wondered what Milner does, the answer is apparently ‘everything’.

As @LFC prepare to face @ManCity in the @premierleague on Super Sunday, @SkySports have used Opta data to analyse the performances of @JamesMilner this season. https://t.co/MnVwjxQVip. Versatile. pic.twitter.com/0wC2sG2YsZ

8) Wolves’ unheralded heroes
The recruitment of Joao Moutinho and Rui Patricio came as a surprise to many outside Wolves, and while the big names have been thoroughly impressive during their splendid start, they have had their thunder stolen slightly by Molineux’s lesser lights. Defenders Conor Coady, Ryan Bennett and Matt Doherty have all stepped up to play starring roles in a campaign that has seen only Man City, Liverpool and Chelsea lose fewer games or concede fewer goals.

This is Nuno’s greatest achievement this season…

7) Mitro’s on fire – still
Rafa Benitez doesn’t rate the Serbia striker and though the Newcastle boss claims to have no regrets about selling Aleksandar Mitrovic to Fulham, he presumably wasn’t expecting the 24-year-old to be keeping pace with Harry Kane and Sergio Aguero in the goalscoring charts.

Without Mitrovic’s five goals, Fulham would be in much bigger trouble than they already are. The £22million recruit scored twice in their only win of the season, while also netting in a couple of draws. His second-half performance against Watford almost single-handedly dragged Fulham back into a game they really should have lost.

Mitrovic’s Championship goals fired Fulham into the Premier League but few expected such form to continue unchecked in the top flight. Not least Rafa. One is left wondering whether he might have had a similar effect for the Magpies. It’s little wonder Chelsea are interested.

6) Old-school Glenn Murray
Lewis Dunk became just the fourth Brighton player ever to receive an England call-up this month, but many believe Murray should have been the fifth. The Seagulls striker netted 14 times last term and five so far this season; Murray is showing that Premier League life begins at 35.

Seeing Murray and those of his ilk regularly trouble the scoresheets once again suggests that, rather more surprisingly, the ‘big man up top’ method is back in vogue. “We went through a period where small and quick strikers was really in,” said the Seagull this term. “Playing with ‘false nines’ and ‘false 10s’ and things like that, but now I think more teams are going back to a bigger guy up front. Somebody who can head the ball rather than just running beyond.”

5) Bournemouth’s most deadly front three
Many scoffed when Asmir Begovic suggested Callum Wilson, Josh King and Ryan Fraser might be on a par with Liverpool’s deadly attacking trio. Turns out the Cherries’ keeper may have had a point.

4) Watford’s flying start
The buzz around the Hornets may have been muted by three Premier League defeats and a Carabao Cup exit in the last month but a 100 per cent record in their opening four Premier League matches caught everyone on the hop.

Much of it comes down to continuity – something Watford have lacked dreadfully in recent years. Javi Gracia became the first manager in four years to end a campaign at Vicarage Road, then preside over the subsequent pre-season and begin the new term. It gave the Spaniard the opportunity to put his stamp on the culture throughout the club, with hefty fines, yoga and improved diets all appearing to pay dividends.

Gracia’s methods ensured Roberto Pereyra was able to compensate for the sale of Richarlison, while Troy Deeney was being talked of as a potential England call-up. Consistency in selection also helped, with Gracia naming an unchanged XI throughout their impressive opening run.

3) Arsenal’s nine-match winning run
The odds were stacked against Unai Emery upon becoming the first new Arsenal manager in over two decades. A World Cup summer hampered preparations with his new squad, while the Premier League fixture computer also stitched him up. After defeats to Man City and Chelsea left the Gunners pointless after two games, some even suggested Emery was already on borrowed time.

Fast forward a couple of months and Emery’s early critics, like Tony Adams, are having their words thrust back down their throat. The Gunners are on their best run for almost three and a half years. Granted, the fixtures have been kind after a difficult start, and they have a wonderful chance to further extend their streak before Liverpool finally offer another major exam at the start of next month.

It is not that Arsenal will challenge for the title this season, because they probably won’t. Emery still has plenty to work on, with his defence being the most immediate priority. But unlike the manager initially presumed, perhaps the Europa League doesn’t represent their best chance of returning to the Champions League after all.

2) Chelsea’s adaptation to Sarri-ball
This one even took Sarri by surprise. “I expect in the first part of the season some problems,” he said on the eve of the campaign. His side promptly opened with one of the best Premier League starts ever.

Chelsea are the only top-flight English side still unbeaten in all competitions, with seven wins and two draws from nine games. Two of those came against Liverpool, who Sarri presumed were much further ahead in their development: “Maybe in one year we will be at the same level as Liverpool,” he suggested before a win and a draw against the Reds forced a re-think. “I think City and Liverpool are a step forward of us,” he said. “But I think also we are more close than I thought one week ago.”

Liverpool and City are probably better placed to mount a title challenge, but Sarri’s start at Stamford Bridge suggests it might not be a two-horse race. This season was supposed to be a transitional period but the Sarri-ball project is well ahead of schedule. If the Italian can iron out a few kinks, with Eden Hazard seemingly hungry to earn a move to Real Madrid while bowing out on a high, then the Blues might be surprising a few more of us come May.

1) How bad Man Utd’s defence has been
Jose Mourinho knew he had problems but even he must have been shocked at the generosity of his defence. Okay, Ed Woodward got it wrong when he concluded that United didn’t need Harry Maguire or Toby Alderweireld, but nobody expected what they already had to be quite this bad.

Only Fulham, Huddersfield and Cardiff have conceded more goals than the 14 shipped by Mourinho’s men, while some of the individual performances have to be seen to be believed. Rio Ferdinand reckoned there was no way back for Eric Bailly after he was hooked against Newcastle, but that could so easily have been the case after his horror show at Brighton on the second weekend of the season.

Mourinho has tried all manner of formations, consisting of too vast a range of personnel. United will belatedly sign a centre-back in January, but with these same defenders, they had conceded only two goals by the same point last term – the best record in the Premier League. It took them half a season to concede 14 last year. Mourinho expected problems, but even he must have been shocked at the fragility of his rearguard.