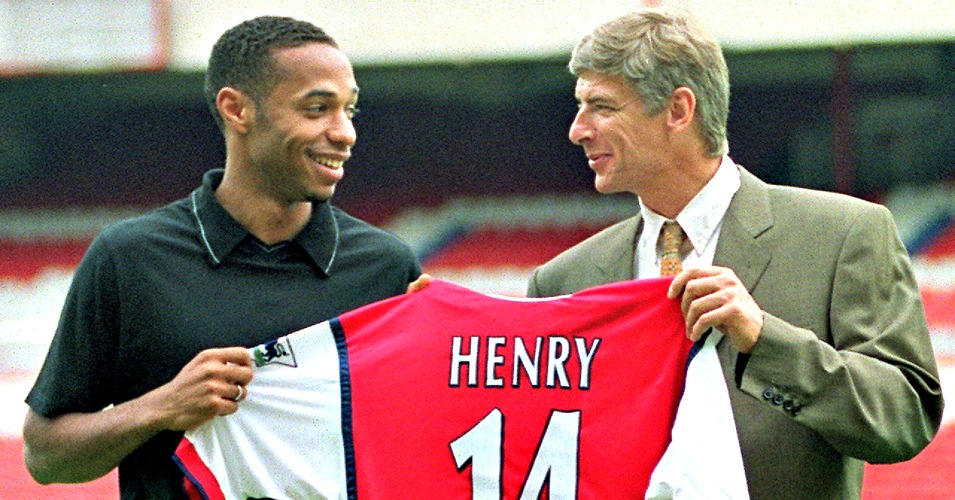 After listing our top 10 German imports into English football, it’s the turn of the French this week…

10. David Ginola
Has there ever been a more stereotypically French man than David Désiré Marc Ginola?

There were two reactions upon Newcastle signing Ginola from Paris Saint-Germain in 1995. 1) This new foreign fella must be good, he cost £2.5million, and 2) He used to play for Brest; how amusing. As it happened, Ginola was good; very good, in fact.

He was hardly an unknown quantity, of course. Courted by Barcelona and Real Madrid upon leaving France, his signing was seen as a coup by then manager Kevin Keegan. Rightfully so, as the gifted winger played a key role in Newcastle’s ‘nearly season’ of 1995/96.

It was at Spurs however where Ginola made history, becoming the first player to be voted PFA Player of the Year despite playing for a team outside the top four. Gareth Bale (2010/11) is the only man to repeat the feat since, evidence of Ginola’s class and craft.

9. Nicolas Anelka
Only six players have won the Premier League title with two different clubs, and no player epitomises the polarising and underwhelming nature of names such as Ashley Cole and Henning Berg more than Nicolas Anelka.

A man whose career in England ended amid controversy, Anelka burst onto the scene as the ‘next Thierry Henry’ before even the actual Thierry Henry was the original Thierry Henry. A true Arsene Wenger bargain at £500,000 from Paris Saint-Germain, the maverick struck 28 goals in 90 appearances for the club before departing for Real Madrid for over £20million.

That was not Le Sulk’s last flirtation with England. He impressed on loan at Liverpool in 2002, but not enough to convince Gerard Houllier to sign him instead of El-Hadji Diouf. Three seasons at Manchester City followed before he packed up and left for Turkey, but the pull of the Premier League proved too much. Bolton was his next home in 2006, and Anelka had reclaimed the form which has seen only James Rodriguez, Zlatan Ibrahimovic and Angel di Maria rack up higher cumulative career transfer fees.

What followed was his most successful and most sustained spell of his career: four-and-a-half seasons at Chelsea. He added to his Premier League and FA Cup haul with Arsenal with one of the former and two more of the latter over a decade on, also claiming the Golden Boot in 2008/09.

West Brom may have happened subsequently, while his attitude problems are well-documented, but that should not take away from just how good Anelka was when he was bothered.

8. Patrice Evra
From being tormented by Trevor Sinclair to winning five Premier League titles and a Champions League among his 15 trophies, Patrice Evra’s journey from his Manchester United bow to becoming a club legend was an endearing one.

“Maybe it was a bit of a gamble playing Evra,” Sir Alex Ferguson conceded after hauling the £5.5million left-back off at half-time in a 3-1 defeat to City in January 2006. Evra concurred, admitting “playing for Manchester United was something I was not prepared for”. The former Monaco man looked destined to become more William Prunier (came 11th on this list, by the way) than Denis Irwin.

Evra made just 14 appearances in all competitions in his first season at Old Trafford, struggling to break into the first team. His first full campaign was difficult too, but by the 2007/08 season, Evra was one of the finest full-backs in Europe; Fergie had done it yet again.

Most striking about Evra was his relationship with the fans. After helping new club Juventus beat Real Madrid 2-1 in the first-leg of a Champions League semi-final, the Frenchman was busy telling the press he, alongside goalscorer Carlos Tevez, “had United blood”. The forward’s standing with the club is fractured beyond repair for many, but Evra remains one of few unanimously adored at Old Trafford.

7. Marcel Desailly
Ron Atkinson may disagree, but Marcel Desailly still stands tall as one of the finest foreign imports the Premier League has seen.

Signed from AC Milan for under £5million, Chelsea had sent out a signal of their intent with the purchase of Desailly in 1998. This was a two-time Champions League winner, fresh from winning the World Cup with France and in the prime of his career.

The Blues had not won a top-flight title since 1955, but with an FA Cup victory followed up by a League Cup triumph in the seasons before Desailly’s arrival, a Premier League title challenge was expected. With Desailly the fulcrum of the defence, Chelsea finished third in his first season, their highest league finish since 1970. A sustained title tilt never quite materialised during Desailly’s time, but the commanding defender remained one of the league’s finest centre-halves regardless.

A Super Cup, FA Cup and a Charity Shield represents an underwhelming haul for Desailly during his six-year spell at Stamford Bridge, with his decline unfortunately coinciding with the club’s new-found riches. Desailly left Chelsea in the summer of Jose Mourinho’s initial appointment as manager, with Mateja Kezman earning a Premier League winner’s medal the following season instead.

6. Claude Makelele
“Why put another layer of gold paint on the Bentley when you are losing the entire engine?”

Zinedine Zidane’s response to Real Madrid’s sale of Claude Makelele to Chelsea in 2003 proved more than apt during Makelele’s time at Stamford Bridge. The dimunitive midfielder failed to help the Blues win the Premier League in his first season, but back-to-back titles followed in the next two. Having played a key role in Real’s 2002/03 La Liga win before his departure, the Spanish club failed to win the title again until 2007. The Makelele effect.

Few players become so synonymous with a role to have their own name lended to it, but even fewer players were akin to Makelele. Dubbed the “battery” of the team by Claudio Ranieri and praised as Chelsea’s most important player in their successive Premier League triumphs by Jose Mourinho, Makelele’s arrival facilitated an era of unprecedented success for the club.

5. Robert Pires
For such a phenomenal player, Robert Pires suffered the most ignominious of conclusions to his Arsenal career. For the Frenchman to have to make way for Manuel Almunia in the 20th minute of a demoralising Champions League final defeat to Barcelona was not a fitting end to a brilliant Premier League spell.

In truth, Pires’ standing as a Premier League great suffers due to the standard of his team-mates. Thierry Henry, Gilberto Silva, Patrick Vieira and Sol Campbell are often credited with the starring roles in Arsenal’s ‘Invincibles’ season, but Pires played as big a part as any. Of his 62 Premier League goals in just six years at the club, 14 came in 2003/04.

Marc Overmars’ departure for Barcelona in 2000 was expected to be sorely felt by Arsenal, but it was a blow softened by the arrival of Pires. Signed from Marseille for £6million, the Frenchman soon eclipsed even the Dutch winger after an initial struggle.

Pires’ phenomenal spell at Arsenal, which included seven major trophies, was one of guile, class and skill, having formed a deadly left-sided triumvirate with Ashley Cole and Thierry Henry. Outside of the Emirates, the Frenchman is perhaps one of the most understated talents seen on these shores.

The Red Devils were eighth in the Premier League at the time, with runaway leaders Norwich enjoying a nine-point gap over Alex Ferguson’s side. United hadn’t won the top-flight in 26 years; Cantona’s arrival not only ended that drought, but signalled a further three Premier League titles in the next four seasons. His eight-month ban for literally kicking alleged racism out of football was arguably the difference between United and eventual champions Blackburn in 1995.

Cantona was not the quickest, he wasn’t the strongest or the most skillful, nor was he a supreme goalscorer. In terms of influence however – not only on United but on the Premier League as a whole – King Eric stands alone.

Cantona was the catalyst for English football’s cosmopolitan makeover in the 1990s, the maverick who paved the way for a necessary foreign influx. His lasting impact on the game is indelible, his words effortlessly and interminably quotable, and his chips forever impudent.

Ferguson is rightfully seen as the man who changed United’s fortunes in the modern day, but Cantona is often credited with the Scot’s biggest assist. Cantona revolutionised both the club and the league; an enigma wrapped in a football shirt with a trademark popped collar.

A signing orchestrated by Arsene Wenger even before the manager was appointed by the club, Vieira adapted instantly upon signing from AC Milan in 1996; the fabled ‘settling-in’ period was no match for his might. No player played a more important role in the three Premier League titles and four FA Cup trophies which followed, while he added one more to the latter tally during a short spell at Manchester City.

But it was at Arsenal where Vieira became one of the finest footballers in the world. He allied a passing acumen symptomatic of the club with his gargantuan strides from midfield and combative nature like no other. In Francis Coquelin the Gunners have finally come the closest yet to replicating his countryman’s battling defensive midfield qualities but, in truth, a player of Vieira’s class can never be fully replaced.

2. Arsene Wenger
As the Evening Standard reported in September 1996: ‘Arsene Who?’

Wenger arrived to little fanfare after Bruce Rioch’s sacking; the young, French professor whose previous managerial spell came in Japan. Appointed amid a culture of heavy drinking at the club and in football as a whole, Wenger revolutionised the sport with his fancy madcap ideas such as dedicated diets and nutrition.

In his first full season at the club, the manager led Arsenal to a Premier League and FA Cup double, thus ending Alex Ferguson and Manchester United’s stranglehold on the top-flight. It was a tussle that would last for over a decade-and-a-half, starting with veritable dislike and culminating in a mutual respect.

Even now, Wenger continues to defy his critics. Few managers would have relished the prospect of leading a club through a stadium move so crippling to such lofty trophy ambitions, and though some criticisms of Wenger during that time are founded, the club are currently reaping the benefits. Wenger’s former midfielder Remi Garde has become the 221st manager to be appointed by a Premier League club since Le Prof’s arrival, and there are no signs of the 66-year-old abdicating just yet.

1. Thierry Henry
Some players boast pace, others pride themselves on their skill or strength; a small selection marry said three characteristics with a prolific goalscoring record, and no-one but Thierry Henry combined it all with such class.

We all know the story: Signed from Juventus as a winger, Henry was slowly but surely transformed by Arsene Wenger into perhaps the finest striker the Premier League has ever seen. Alan Shearer, Andy Cole, Wayne Rooney and Frank Lampard sit ahead of him in the all-time top goalscorers list for England’s top division, but the fewest Premier League seasons any of those men enjoyed was 14; Henry had just eight at Arsenal before Barcelona came calling.

A two-time Premier League champion and three-time FA Cup winner with Arsenal, Henry was the focal point of ‘the Invincibles’, and so very nearly led the Gunners to Champions League glory in his penultimate campaign. It’s no wonder he was voted by fans as the club’s best ever player.

That Henry never claimed the Ballon d’Or is the slightest of blotches on an excellent CV. At the top of his game, Henry had no rival, and his statue proudly stands outside the Emirates as one of the club’s true legends. The sight of the Frenchman kissing the Highbury turf for one final time after scoring a hat-trick in the final game at the famous ground will live long in the memory, as will his certified highlight reel of a career in England.