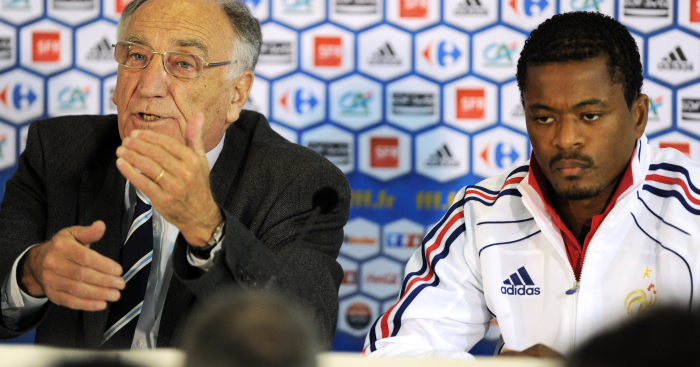 10) Zlatko Zahovic – 2002
The Slovenia star was substituted by coach Srecko Katanec just after the hour mark of their opening game in South Korea – a 3-1 defeat to Spain. Zahovic did not take it well.

In the dressing-room, the then-Benfica striker is said to have ranted:

“I can buy all of you, I can buy the whole association, I can buy Smarna Gora [Katanec’s home town]. I can’t stay in a team like this where you will substitute me in a game like this in the World Cup.”

So he didn’t. Zahovic was sent packing, while Slovenia lost all three group games. He later apologised before being brought back into the fold. Then he retired from international football, and reversed that decision too. Loves the drama, does Zlatko…

During Croatia’s opening group game against Nigeria, Kalinic was sent to warm up before being instructed by Zlatko Dalic to get stripped. The centre-forward, however, was too snug in his tracksuit.

“He stated that he wasn’t ready to come on due to a back issue,” said Dalic, while explaining that Kalinic had previous: “The same thing happened during the Brazil friendly in England, as well as before the practice session on Sunday. I have calmly accepted that, and since I need my players fit and ready to play, I have made this decision.”

Kalinic’s departure left Croatia with only 22 players for the rest of the tournament but anyone who watched the 30-year-old play for Rovers, or last season at AC Milan when he scored six goals in 41 appearances, might conclude that to be no great loss.

8) Spain – 2018
We don’t know yet what cost Spain will pay for the internal shambles that led to the sacking of their coach on the eve of the tournament in Russia and we probably haven’t heard the last of it yet.

Spanish Football Federation president Luis Rubiales was put in a no-win situation. Despite the federation having agreed a new contract with Julen Lopetegui, the coach reneged and accepted the offer from Real Madrid. Rubiales took umbrage with the fact neither Lopetegui nor Real bothered to inform the federation until five minutes prior to the public announcement. Not too much to ask, you would think…

Having spoken of his desire to create a strong body, one that could reclaim the power from Real and Barcelona, Rubiales had to choose between leaving the federation vulnerable or the national team leaderless. Despite some players’ protestations, Rubiales opted to sack Lopetegui and install Fernando Hierro.

We sit and wait to see what, if any, difference it makes…

7) Scotland – 1978
Scotland went to Argentina in 1978 with genuine ambitions of winning the World Cup. They were given a heroes’ farewell, with an open-top bus parading the squad around Hampden Park on the way to the airport. They arrived back to rather less fanfare shortly afterwards with their tails between their legs.

That was thanks in no small part to manager Ally Macleod’s bravado. The Scotland boss felt no need to scout the opposition, insisting it would not matter if the Scots played to their capability. He turned down an all-expenses-paid trip to South America to take a look at Peru. Had he taken that trip, MacLeod would have seen that their opening opponents were actually pretty useful. Instead, he had to learn the hard way when Scotland were humbled 3-1.

Iran were rather less talented than Peru but they still held Scotland to a draw, with a point taken only after an Iranian own goal. Scotland finally got their sh*t together for the final group game against Holland, which included Archie Gemmill’s stunning solo goal. But it was not enough and MacLeod’s men exited on goal difference.

Residing in a resort near Cordoba that was barely finished, the whole trip was a nightmare for the Scotland squad, though for no-one more than Willie Johnstone, who was removed from the premises by gun-toting guards after failing a doping test. “When I was on that bus on my own with two soldiers and two guns, I was thinking ‘this is it, they’ll take me to the end of the runway and shoot me’,” he said.

6) Steffan Effenberg – 1994
The Germany midfielder was told to pack his bags after giving fans the finger upon being substituted during a 3-2 win over South Korea during the group stage at USA ’94.

Effenberg is seemingly a bit of a d*ck and coach Berti Vogts said it wasn’t an isolated incident:

“It was the last straw. I will not allow a player to make an obscene gesture like that to the crowd.

“As far as I am concerned Effenberg is over as an international player. He has done too much in recent years. There were also internal problems during the European Championships in 1992.”

His team-mates, though, spoke of their sympathy for Effenberg, who didn’t take the sanction lying down:

“The way the coach reacted was ridiculous. I have talked to some of the players and they don’t understand why I have to go. I overreacted. I don’t regret it. But when I look back I am sorry. But it was 50C. I was playing for Germany at the World Cup for a place in the second round.”

5) Brazil – 2014
The hosts seemed destined to add a sixth star on home soil by the time they reached the semi-finals. But, before facing Germany, Brazil lost Neymar when their talisman was clattered during the quarter-final win over Colombia.

Contrary to the outpouring of grief, ‘death’ was not the ailment that kept Neymar on the sidelines. He had a back injury, a nasty one, but not one that warranted such mourning. His team-mates, captained by David Luiz, held Neymar’s shirt like a comfort blanket during the national anthems, but what followed was the most devastating destruction of a dream in World Cup history.

Germany were 5-0 up half an hour in, as the tears flowed in Belo Horizonte. The only other teams in World Cup history to trail by such a margin at half-time were Zaire, Haiti and, most recently, Panama. At the break, Germany coach Joachim Low was most concerned with not humiliating their generous hosts: “I didn’t want anyone to make a fool of the Brazilians in front of an audience of millions.”

Too late. Germany added two more, despite taking their foot off the gas while sheepishly completing one of the most savage acts of slaughter the game has seen.

4) Diego Maradona – 1994
Maradona’s goal and subsequent celebration hogged the headlines after Argentina’s 4-0 opening win over Greece, despite Gabriel Batistuata’s hat-trick. That was until it emerged after the 2-1 win over Nigeria that the 33-year-old had failed a drugs test.

Specifically, the substance was ephedrine, which can be used as a stimulant or to lose weight. Maradona had lost 22lbs to play in USA and a member of FIFA’s executive committee said at the time: “He must have taken a cocktail of drugs because the five identified substances are not found in one medicine.”

“They have retired me from soccer. I don’t think I want another revenge. My soul is broken.”

It wasn’t a dead loss. Rather than return home, Maradona stuck around and pocketed around £900,000 as a TV pundit while Argentina lost their final group game and exited at the first knockout stage.

3) Luis Suarez – 2014
“I want to change the bad boy image that has stuck for a bit because I don’t think I am at all how I have been portrayed,” said Uruguay’s biggest star and the man who had racially abused Patrice Evra, bit Branislav Ivanovic and Otman Bakkal, and punched the ball off the goal-line to deny Ghana a World Cup semi-final place four years previously.

The charm offensive started well in Brazil, where Liverpool striker Suarez scored twice to knock England out before the tournament was a week old. Uruguay had to beat Italy in their final group game to go through and frustration was starting to build after Gianluigi Buffon had denied Suarez an opener. La Celeste did find a breakthrough, but only two minutes after Suarez had tried to break Giorgio Chiellini’s skin with his teeth.

Retribution was swift, despite all the denials Suarez could muster. Suarez was banned for nine international matches and from all football for four months. Uruguay was not a happy place, with the country’s president, Jose Mujica, labelling FIFA “a bunch of old sons of bitches”. He may have had a point, but not in this context.

2) Roy Keane – 2002
The former Repulic of Ireland captain was seething at the piss-poor preparation the FAI had made for the squad’s arrival in Saipan ahead of the tournament in South Korea. But Keane said last week that is not the reason it all kicked off between him and Mick McCarthy in a team meeting.

What ensued, according to Shay Given, was “just a total destruction of Mick, personally and professionally”.

Keane calmly packed his stuff and returned home to walk Triggs while the rest of McCarthy’s squad got as far as the first knock-out round before losing to Spain on penalties.

1) France – 2010
Given that they cheated to get to South Africa, there were few fans in Britain and Ireland who didn’t find France’s implosion absolutely hilarious.

There was all sorts of shenanigans taking place before it really kicked off when, at half-time during their second group match against Mexico, Nicolas Anelka told coach Raymond Domenech to “go f*ck yourself, you son of a whore”. Anelka, understandably, was sent home but the France players sided with their team-mate.

After captain Patrice Evra had a training ground row with fitness coach Robert Duverne, the players refused to get off the bus for training. Instead, they drafted a statement, probably in crayon, which Domenech was daft enough to read to the media.

French president Nicolas Sarkozy dispatched his sports minister Roselyne Bachelot to sort out the rabble: “I told the players they had tarnished the image of France. It is a disaster for French football. I told them they could no longer be heroes for our children. They have destroyed the dreams of their countrymen, their friends and supporters.”

France lost their final game against South Africa, meaning they returned home – in economy class – with just a single point and countless questions to answer. Anelka,  Evra, Franck Ribery, Jeremy Toulalan and Eric Abidal were summoned to appear before an FFF disciplinary committee with Evra and Ribery held responsible for failing in their duties as captain and vice captain; Toulalan was identified as being behind the statement handed to Domenech; Abidal was accused of refusing to play against South Africa.

Anelka was banned from playing for France for 18 games, though it mattered little as he had already announced his international retirement. Evra and Ribery were banned for five and three games respectively, while Toulalan was suspended for one match. Whoosh.