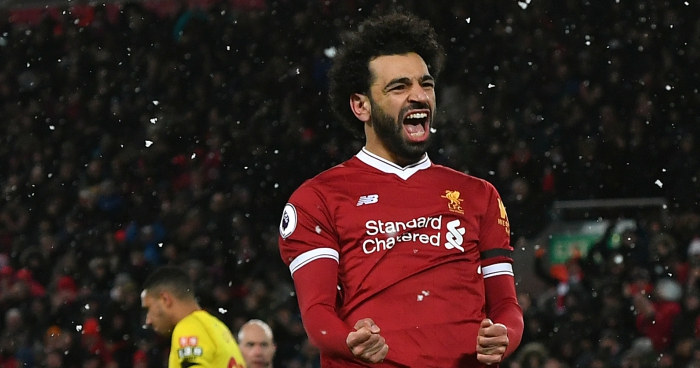 We’re talking Europe’s top ten leagues (plus European competition) and we are talking 2018. You have to get to 37th place before you find an Englishman in Harry Kane and his seven goals.

11) Sergio Aguero (Manchester City): Ten goals in 2018
No goals in March, which is frankly embarrassing for the Argentine. He might argue that he only played Arsenal and Chelsea before succumbing to a knee injury, but we have no time for such excuses. Pull your finger out, Sergio.

10) Robert Lewandowski (Bayern Munich): Ten goals in 2018
Quite frankly, a goal every 65 minutes of Bundesliga and Champions League football in 2018 is mental. His consistency is nothing short of phenomenal. He might not be the sexiest signing Real Madrid could make this summer, but he is probably the one potential signing guaranteed to deliver goals.

9) Luis Suarez (Barcelona): 11 goals in 2018
Remember when he looked finished in about October? He is absolutely not finished – as evidenced by 21 goals in 25 La Liga games. But do you know what’s odd? He has not scored a single Champions League goal this season.

8) Bas Dost (Sporting Lisbon): 11 goals in 2018
The big Dutchman has missed five games through injury and still somehow reached 11 goals in 2018. The good news for England is that according to Dutch coach Ronald Koeman, he arrived for international duty “tired”. It’s hardly surprising…

🔥🔥 Bas Dost just keeps on scoring. His record for Sporting CP in the Portuguese Liga this season:

7) Bafetimbi Gomis (Galatasaray): 11 goals in 2018
He is 32 years old and in the form of his life. No European football for Galatasaray (they lost in the Europa League qualifiers to bloody Ostersund) but they top the Turkish league thanks in part to 25 goals in 25 games for the Swansea reject. The man has found a home. That makes us happy. A goal every 58 minutes of football in 2018? Wow.

6) Ciro Immobile (Lazio): 12 goals in 2018
The very much underrated Immobile (bought for a bargain £8.5m) was on course to both a) finish the season as Serie A top scorer and b) take Lazio back to the Champions League, but Lazio’s form has fallen off a cliff in March, with no wins in three Serie A games. The Italian is still on course for the first honour, though Mauro Icardi’s four goals against Sampdoria have dragged him within touching distance.

5) Mo Salah (Liverpool): 12 goals in 2018
A bloody sensation. Just wonderful and rocketing up this list (and all the other lists) thanks to a four-goal haul against Watford that takes him to a ridiculous 28 Premier League goals for the season. Read Winners and Losers for a massive amount of love.

4) Lionel Messi (Barcelona): 13 goals in 2018
You may have heard of him. He has scored eight goals in his last six La Liga and Champions League games. And this is a man supposedly slowing down at the age of 30.

3) Jonas (Benfica): 13 goals in 2018
A veritable machine…Jonas now has 119 goals in 149 games for Benfica. He has 31 league goals already this season, putting him way ahead of Dost (23) in the Liga NOS charts. All those goals and there isn’t a chance of a World Cup call-up from Brazil.

2) Antoine Griezmann (Atletico Madrid): 14 goals in 2018
Look who is timing things perfectly to seal a ridiculous wage from Barcelona. After just seven goals in the first half of the season, the Frenchman has found fifth gear in 2018. His record for Atletico is now 106 goals in 198 games. Not bad, fella.

1) Cristiano Ronaldo (Real Madrid) 21 goals in 2018
Yes, that does say 21. He is 33. How can this even be possible? Just when you think it’s all over, he drags himself to his feet and scores goals against Deportivo, Valencia, Real Sociedad, Real Betis, Alaves, Getafe, Eibar, Girona and of course PSG. That is a goal every 55 minutes in 2018. He is now just three goals behind Messi in the Pichichi race, which so sounds like something from Pokemon.

“There will never be another Cristiano, ever,” he said after scoring four goals against Girona. He might be a d*ck but he is bloody right.

More from Planet Sport: What Rory McIlroy has to do to win the US Masters (Golf365).