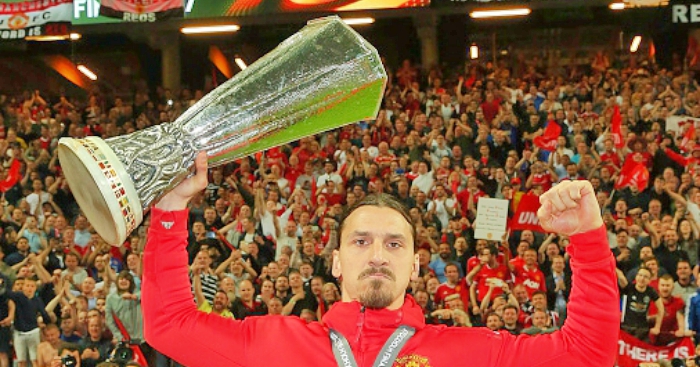 To keep this slightly outside the realms of ridiculousness, only players who have played at least one season of club football in Europe are included. Sorry Pele, with your 4,270 goals and 27 trophies.

Also, the number in brackets represents the amount of trophies the player won at club level. We’re not messing about with international honours.

Edwin van der Sar  – 25 (trophies won with Ajax and Manchester United)
Our sincere apologies are extended to the first of just four goalkeepers to appear on this list. Edwin van der Sar, he of eight league titles, two Champions League trophies and many more accolades, might feel aggrieved not to have finished higher. On grounds of fairness, we have had to exclude his Intertoto Cups with both Juventus and Fulham.

Bastian Schweinsteiger – 25 (26) (Bayern Munich and Manchester United)
A man whose figures are boosted courtesy of victories in the Community Shield, EFL Cup and Europa League finals – he featured for 32 minutes across the entirety of the three tournaments – Bastian Schweinsteiger can also lay claim to a World Cup winner’s medal. He is one of four men to win the Bundesliga eight times – a joint record.

Paul Scholes – 25 (Manchester United)
It wasn’t until Paul Scholes’ second season as a professional that he lifted his first trophy. A Premier League and FA Cup double was delivered in the 1995/96 season, and he brought his 20-year playing career to a close with his 13th league title in 2013.

David Beckham – 25 (Manchester United, Real Madrid, LA Galaxy and PSG)
Some people will turn their nose up at the ten trophies David Beckham collected in five years with LA Galaxy, but the man is an icon and we won’t dare to argue with him.

Sergio Busquets – 26 (Barcelona)
He might not be the most popular footballer on earth, but the man who played a crucial role in Barcelona’s modern domination has a bulging trophy cabinet to show for it, so to speak. Don’t forget the World Cup and European Championship victories with Spain, either.

Arjen Robben – 26 (PSV, Chelsea, Real Madrid and Bayern Munich)
It turns out that cutting inside and shooting – and often scoring – is a pretty efficient tactic. Arjen Robben is one of a select few players to have ever won league titles in four different countries.

Xavi – 27 (Barcelona and Al-Sadd)
Again, Xavi can count the illustrious Emir of Qatar Cup and Qatar Crown Prince Cup, won after a move to less testing waters in his twilight years, among his list of honours. Again, the boy is an icon and so we won’t argue.

New TV customers can continue to enjoy great entertainment with award-winning dramas, must-see series and comedies when they Join Sky TV and get 33% off selected Sky TV Bundles for 18 months. This offer is live until midnight 5th June. Click here.

Julio Cesar – 29 (Flamengo, Inter and Benfica)
The only real surprise is that Julio Cesar didn’t manage to increase his numbers at QPR. Imagine if he had Clint Hill in front of him for the 2010 Champions League final instead of Lucio.

Lionel Messi – 30 (Barcelona)
But then Lionel Messi is just 29, and boasts more silver than a ruddy magpie. Cristiano Ronaldo, for what it’s worth, has won 21 trophies down the years – although the Portuguese has tasted success with his country.

Andres Iniesta – 30 (Barcelona)
Like Pique and Messi before him, Andres Iniesta is expected to add one more trophy to his collection when Barcelona face Alaves in the Copa del Rey final on Saturday. His last season without winning silverware of any kind was 2007/08.

Vitor Baia – 30 (Porto and Barcelona)
You think you’ve seen things? Spare a thought for Vitor Baia, the final survivor at Porto when the Portuguese club were plundered in 2004. The goalkeeper spent 16 fruitful years in his homeland, briefly departing for Barcelona in 1996 to win five trophies in two years before returning.

Kenny Dalglish – 31 (Celtic and Liverpool)
Six First Division titles. Three European Cups. Countless honours in Scotland, but continued relentless dominance upon his journey south. ‘Not only did Dalglish end his playing career as Liverpool’s greatest player, but as the most decorated player in British domestic football,’ one individual once wrote. It is to Dalglish’s great credit that only one man has managed to surpass him in terms of the latter achievement.

31 years ago today Kenny stunned Everton by beating them to both trophies. And a magnificent 3-1 drubbing at Wembley. #Kenny Dalglish stand pic.twitter.com/WrXjTd5yjk

Zlatan Ibrahimovic – 33 (Ajax, Juventus, Inter, Barcelona, Milan, PSG and Manchester United)
At least one trophy in every season since leaving his native Sweden in 2001. A title-winner in 13 of the 16 seasons during that same sequence. Sixteen different individual competitions won. A man who has won trophies at seven different clubs, and league titles in four different countries. Best of luck telling Zlatan Ibrahimovic that the Calciopoli scandal strips him of two Serie A titles.

Dani Alves – 34 (Bahia, Sevilla, Barcelona and Juventus)
When Dani Alves left Barcelona last summer, he departed having won 23 major honours in eight years. It was thought that the right-back was no longer of the requisite standard; Barca felt they could do better. Twelve months later, his former employers have only the Copa del Rey to fight for, while Alves will hope to guide Juventus to a Champions League trophy to complement their Serie A title and Coppa Italia trophy.

Ryan Giggs – 35 (Manchester United)
Ryan Giggs has won more trophies than all but three clubs in English football. It would admittedly be difficult to best Manchester United (66), but Liverpool (60) and Arsenal (44) are the only other sides to outdo the Welshman.

Oleksandr Shovkovskiy – 36 (Dynamo Kiev)
Three players have made over 100 Champions League appearances in the history of the competition without ever winning it. Gianluigi Buffon will hope to vacate that select group next month, while Zlatan Ibrahimovic will harbour future hopes of ridding himself of that particular demon. Oleksandr Shovkovskiy is unlikely to ever be afforded that chance. The 42-year-old will have to comfort himself with one of his 14 Ukrainian Premier League titles instead.

Hossam Hassan – 36 (Al-Ahly, Al Ain and Zamalek)
Courtesy of brief spells with PAOK and Neuchâtel Xamax early in his career, Egyptian legend Hossam Hassan qualifies for this list. Over a 22-year playing career the striker won a number of delightful accolades, from the Afro-Asian Cup to the Saudi-Egyptian Super Cup. He also finished joint-top goalscorer at the 1998 African Cup of Nations with Benni McCarthy, so think twice before you discount him.

Maxwell – 37 (Cruzeiro, Ajax, Inter, Barcelona and PSG)
From his Copa do Brasil victory with Cruzeiro in 2000, to his most recent success with PSG in the Coupe de France on Saturday, left-back Maxwell has carved out an unlikely reputation as a serial trophy hoarder.

The Brazilian’s Wikipedia page tells us that he ‘is known to be one of Zlatan Ibrahimović’s closest friends; they were teammates at Ajax, Internazionale, Barcelona and PSG.’ And that clears up the mystery.

Maxwell has now won 37 trophies in his career: