Home All The News Top five assistants who flopped as managers… 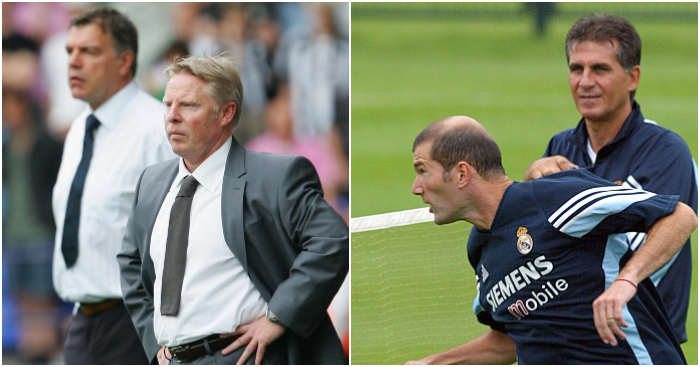 Mikel Arteta is reportedly close to being appointed as Arsenal boss in his first managerial role, while Rui Faria and Zeljko Buvac are both looking to take the step up. It’s a risky move, given Daniel Storey had to include a man born 133 years ago to make up a list of five assistants who stepped up to become successful managers. There are plenty more No.2s who completely f***ed it…

5. Sammy Lee
The Little to Allardyce’s Large, Lee took over at Bolton after serving as a loyal assistant to Big Sam for two seasons which saw the Trotters play in the UEFA Cup while finishing eighth and fifth in the Premier League. Allardyce recommended Lee for the role, despite increasing bitterness between the club and the Newcastle-bound boss.

Seemingly keen to be seen as his own man, Lee opted for revolution over evolution and it failed spectacularly. He was sacked after 170 days, having made 12 signings and won one of 11 Premier League games. Lee hasn’t taken a permanent manager’s gig since, but he returned to the Reebok Stadium as a coach under Owen Coyle. His reputation as an assistant remains intact after stints with Liverpool, Southampton, England, Crystal Palace and Everton.

4. Chris Hutchings
The former bricklayer and second-hand car salesman was Chris Kamara’s assistant when Bradford moved from the third tier to the second in 1996 and again when Paul Jewell took the Bantams into the Premier League in 1999. When Jewell swanned off to Sheffield Wednesday after keeping City in the top flight, Geoffrey Richmond opted for continuity (or the cheaper option, depending on your viewpoint), giving Hutchings his first managerial job.

The Bantams won one league game during his 137-day reign, during which he signed Dan Petrescu, Benito Carbone and, a week before he was axed, Stan Collymore. Bradford never recovered, ending the season bottom of the table as their descent through the Football League began.

Hutchings reunited with Jewell at Wigan and was again promoted to the top job when his mate left in summer 2007. It went exactly as you’d expect, with the Latics in the drop zone on eight points after 12 matches when Hutchings was sacked almost exactly seven years to the day since he was shown the door by Bradford.

3. Steve Wigley
The former youth and reserve team coach was welcomed by Southampton fans in August 2004 more on the basis of who he wasn’t. “The news of Wigley’s appointment will kill off rumours of a return for Glenn Hoddle or even Gordon Strachan,” said a surprisingly honest club statement.

But Saints were forced to issue another barely three months and 15 games later after a solitary win prompted another change and the appointment of Harry Redknapp. Wigley was wonderfully diplomatic over being replaced: “Now that might have riled some people but I’m not going to whinge about my job being offered to somebody else. I happen to think Harry is a good appointment. He has so much life and vitality and he will breathe that into the club.”

2. John Carver
The Geordie served as Sir Bobby Robson’s assistant at Newcastle before returning to St James’ Park under Alan Pardew in 2011, having had coaching stints at Leeds, Luton, Plymouth and Sheffield United – as well as a spell as Toronto FC’s manager during the intervening period.

When Newcastle fans were inviting Pardew to ‘f*ck off back to London’, they perhaps had not accounted for the possibility that Mike Ashley would be too thrifty to bother appointing a proper successor. Instead, with the Toon seemingly snug in 10th, Carver was promoted to steer the ship into the end of the season but they began sinking almost immediately.

During his half-season reign which left the Toon teetering one place above the drop zone in the final week of the season, Carver accused his captain of getting himself sent-off intentionally before declaring himself ‘the best coach in the Premier League’. They escaped with a final-day home win over West Ham, who barely waited for the final whistle to sack Allardyce.

Brian Kidd left United midway through the 1998-99 season to take over at Blackburn. Five months later, United were celebrating the Treble while Rovers were relegated. Kidd lasted until November when he was axed with Blackburn 19th in the second tier. He didn’t manage again.

Steve McClaren made a slightly better fist of stepping up, though England and Newcastle fans might argue. Carlos Queiroz, unbelievably, was promoted from United’s assistant to Real Madrid’s head coach – though he was sacked after one season during which he could only finish fourth in La Liga with a squad containing Zidane, Ronaldo, Figo, Raul, Beckham and Roberto Carlos. Queiroz didn’t fare much better when he left United for a second time to take the Portugal national team job in 2008. He was sacked after the 2010 World Cup which saw Portugal exit at the first knockout round stage having failed to score in three of their four matches in South Africa.

Mike Phelan left United with Ferguson but found himself a Premier League manager’s job when he stepped up to replace Steve Bruce at Hull at the start of 2016-17. He won the Manager of the Month award in August before finally being appointed on a permanent basis. The Tigers were smashed 6-1 in the following game and went on a run of one win in 12 which left them in the relegation zone and cost Phelan his job.