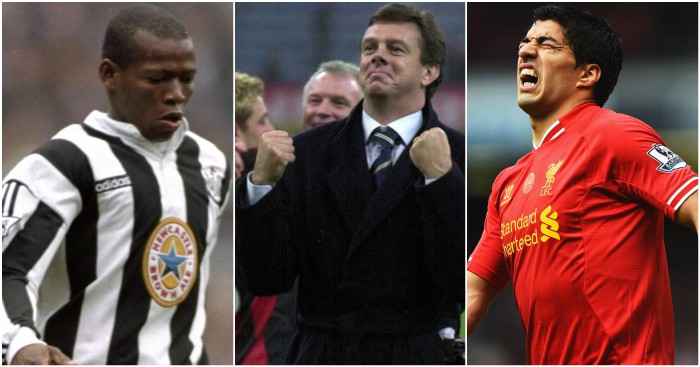 David O’Leary’s Leeds United 1999-2001
The spectacular fall from grace that immediately followed Leeds United’s run to the Champions League semi-finals has since somewhat overshadowed what David O’Leary’s “babies” achieved around the turn of the Millennium. Hardly surprising, given Peter Ridsdale’s attempts at “living the dream” came perilously close to the nightmare of ruin.

But before Ridsdale was spluffing all the money on Seth Johnson and aquariums, O’Leary had assembled some mighty Whites. After taking the job following Martin O’Neill’s surprising refusal to do so, O’Leary promoted several youth team prospects with the likes of Jonathan Woodgate, Alan Smith and Harry Kewell justifying the manager’s faith by reaching the UEFA Cup semi finals in 1999-2000. The following season, having qualified for the Champions League and supplemented their squad with the signings of Rio Ferdinand, Robbie Keane and Mark Viduka, Leeds went toe-to-toe with Barcelona, Real Madrid and AC Milan on their way to the semi-finals, where they were beaten by eventual runners-up Valencia.

However, despite losing only one game during the second half of the Premier League season, Leeds missed out on another year in the Champions League, finishing fourth by a single point. This turned out to be catastrophic for the club, which had banked on prolonged involvement in the competition and had taken out huge loans based on that predicted revenue. It all unravelled on the pitch too, with O’Leary’s decision to release an autobiography – ‘Leeds United On Trial’ – around the time of Woodgate and Lee Bowyer’s court cases leading to dressing room upheaval and splits within the club. They finished fifth in 2001-02, again missing out on a Champions League spot, leading to O’Leary’s sacking. The frightening descent had begun, and within five years, they found themselves in League One.

Kevin Keegan’s Newcastle 1992-97
It’s been 63 years since Newcastle won a major honour, but that’s not to say they haven’t come close in the meantime. Sir Bobby Robson’s side, featuring Alan Shearer, Gary Speed, Craig Bellamy and Kieron Dyer, replaced Leeds as the side most likely to shake up the Premier League’s top four, which they did by reaching the Champions League twice.

As close as Sir Bobby came to ending Newcastle’s quest for glory, his team never quite made the Toon Army dream like Kevin Keegan’s entertainers in the mid-1990s. Keegan took Newcastle from the First Division straight up towards the top of the Premier League, securing third and sixth place finishes before they really went for it in 1995-96, having signed Les Ferdinand and David Ginola. By mid-January in 1996, the Toon held a 12-point lead at the summit and looked almost unstoppable by the time they strengthened further with the recruitment of Faustino Asprilla and David Batty.

However, despite leading Man Utd by 17 points in mid-January, after THAT meeting between the two clubs in early March, their lead was cut to just a single point. Alex Ferguson and his young side had smelled blood and Newcastle wilted, losing five games in eight during the spring to blow their hopes of securing a first top-flight title since 1927, allowing the Red Devils to complete an unlikely Double in the process.

Despite signing Alan Shearer that summer as the Magpies looked to regroup, Keegan never recovered from that collapse. Halfway through the following season, he resigned, saying he had taken Newcastle as far as he could. Kenny Dalglish came in and steered them to another runners-up spot and then the FA Cup final the year after, but Keegan’s momentum had been lost.

Claudio Ranieri’s Chelsea 2000-04
Chelsea were no mugs before Roman Abramovich lavished millions upon his new play thing in 2003. By that time, Claudio Ranieri had been in charge for three years and the Italian had built an exciting but frustratingly inconsistent squad.

After a couple of sixth-placed finishes, the Blues, featuring the likes of Gianfranco Zola, Jimmy-Floyd Hasselbaink, Marcel Desailly, Emmanuel Petit and Eidur Gudjohnsen alongside John Terry and Frank Lampard, secured Champions League qualification by beating Liverpool in a final-day shoot-out in 2003.

Shortly after that achievement, which was to be Zola’s last hurrah at Stamford Bridge, Abramovic swooped. The oligarch funded moves for Juan Veron, Hernan Crespo, Claude Makelele, Joe Cole, Damien Duff, Glen Johnson, Wayne Bridge and Scott Parker. In total, Ranieri spent £121million as he took his exciting Chelsea side to a second-place finish in the Premier League and the Champions League semi-finals, where they were disappointingly beaten by Monaco.

Not one to settle for second best, Abramovic fired Ranieri and hired Mourinho, who turned a thrilling-but-potless team into a winning machine.

Harry Redknapp’s Tottenham 2009-12
Harry Redknapp doesn’t like to talk about it, but when he took over from Juande Ramos in late October 2008, Spurs had just two points. Ramos, though, had won silverware with Spurs having won the League Cup, which is something Redknapp never managed, despite building one of the most exciting teams in the country at the time.

During his first full season in charge, after seeing Spurs take the defence of their League Cup all the way to the final, where they were beaten by Man Utd on penalties, Redknapp led Spurs to a top-four finish, securing Champions League qualification, with Harry becoming only the second boss after George Burley to win the Premier League Manager of the Year award when his side did not win the title.

In 2010-11, featuring Gareth Bale, Luka Modric and Rafael van der Vaart, Tottenham thrilled on their way to the Champions League quarter-finals, with Bale’s destruction of Maicon being the highlight as Spurs got the better of both Milan clubs before eventually coming up against Real Madrid in the last eight. Indeed, their season peaked with Peter Crouch’s winner in the San Siro to neat AC Milan in the first leg of their last-16 meeting. After that triumph, they won only once in 10 Premier League games while also being outclassed by Real, meaning they fell away from securing another crack at the Champions League the following season.

It should only have been a one-season absence, with Bale and co. securing a fourth-place finish in the Premier League in 2011-12, but as an added bonus to winning the Champions League, Chelsea, who had finished sixth, took Tottenham’s place instead. Redknapp was fired that summer after failing to agree terms on a new deal, with Van der Vaart and Modric following him out of the door.

Brendan Rodgers’ Liverpool 2012-14
The title was within touching distance for Brendan Rodgers’ thrilling Liverpool side of 2013-14 before their hopes of securing a first Premier League title catastrophically slipped away.

The stated aim for Rodgers was to take the Reds back to the Champions League after a seventh-placed finish during his first season in charge. Liverpool bobbed around the top four for the first half of the season before they embarked upon an exhilarating run after the turn of the New Year, winning 14 out of 16 matches, a run that included a 10-game streak of victories.

Luis Suarez, Steven Gerrard, Daniel Sturridge and Raheem Sterling treated Anfield to some of the finest football it had hosted in years, with Suarez winning the Golden Boot, Sturridge breaking the 20-goal barrier and Gerrard providing the most assists in the Premier League.  The Reds netted 101 goals, but in the end, it was only good enough to make them the first runners-up ever to hit a century.

A fortnight after Gerrard was heard telling his team-mates “this does not slip” immediately after they had retained their top spot by beating Man City in a thriller, the skipper did exactly that. Jose Mourinho parked the Chelsea bus and when he eventually got on it to leave Anfield, he did so with a 2-0 victory that handed the title initiative to City. Liverpool looked to have got it out of their system eight days later when they ran into a 3-0 lead at Crystal Palace in the penultimate game of the season but they collapsed spectacularly, allowing the hosts to score three in the final 11 minutes. Suarez left the pitch in tears before exiting Anfield for Barcelona in the summer, when Liverpool completely fudged their recruitment and whatever hopes they may have had of lifting any silverware under Rodgers.