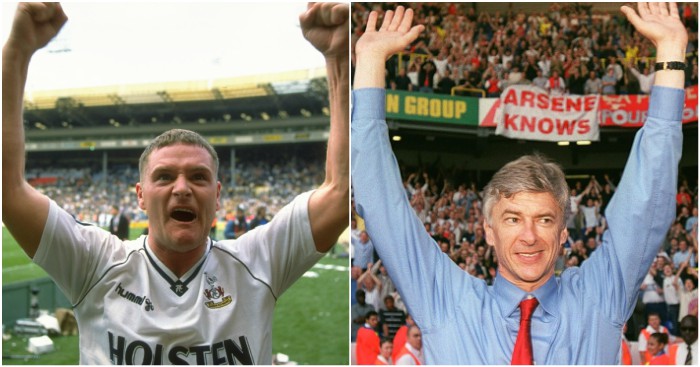 This weekend’s derby could have ramifications reaching beyond north London, just like these other five meetings that really mattered…

Tottenham 5 Arsenal 1 (League Cup semi-final second leg, January 22, 2008)
Having not beaten Arsenal in eight years and been extremely unfortunate during the first leg which finished 1-1 after Theo Walcott’s lucky leveller, their derby record had become a burden for Spurs.

But in the early days of the Juande Ramos era, Tottenham blew apart their rivals with a superb performance that involved five goals, a Nicklas Bendtner own-goal and the type of fight between team-mates featuring Bendtner and William Gallas where plenty watching would happily see both men land the knockout punch at exactly the same time.

Tottenham went on to finish the job by beating Chelsea in the final to claim what was their last piece of silverware. Summing up a hopelessly inconsistent season in which they never a winning or losing run never lasted more than two games, Spurs scored more Premier League goals than eventual runners up Chelsea, with only four sides netting more. But only four teams conceded more too, meaning Ramos’s men had to make do with finishing top of the bottom half, while Arsenal were nestled comfortably in third.

Tottenham 3 Arsenal 1 (FA Cup semi-final, April 14, 1991)
Arsenal cruised to the Division One title and had eyes on the Double prior to their FA Cup semi-final meeting with Spurs at Wembley – the first semi to be held at the national stadium.

But word had reached Paul Gascoigne that the Gunners had been somewhat presumptuous and had been fitted for their final suits already. George Graham was already worried enough about the England midfielder that he instructed Michael Thomas to man-mark him, despite the fact Gazza was barely fit again after a hernia operation.

That scurrilous rumour was all the motivation Gazza needed. He smashed in one of his most memorable goals just five minutes in before playing a major part in the build up to their second. Gary Lineker completed a brace in the second half when David Seaman again lost the use of his fingers.

Spurs went on to lift the cup, though obviously Gazza was laid up in hospital by the time they received it, while Arsenal had to make do with winning the title by nine points.

Tottenham 0 Arsenal 1 (First Division, May 3, 1971)
Arsenal went to White Hart Lane for the final game of the 1970-71 season along with 105,000 others, apparently, though officially around half of that crowd was locked out as the Gunners sought to secure the Division One title.

Having gone toe-to-toe with Leeds all season at the top of the table and lost at Elland Road the previous week to a controversial injury-time winner, Arsenal knew they needed just a win or even a goalless draw to make certain of the championship. Any other result would have seen Leeds triumph.

Despite third-placed Spurs’ best efforts to ruin everything for their neighbours, Arsenal were on course for the 0-0 they required before Ray Kennedy scored late on for the visitors. It mattered little given, as it would have before, just one Spurs goal would have sent the title north. But the Gunners hung on and claimed their first championship since 1953, before Bertie Mee’s men completed their first ever double the following weekend by beating Liverpool at Wembley in the FA Cup final.

Tottenham 2 Arsenal 2 (Premier League, April 26, 2004)
Tottenham held rather less fear 33 years later when Arsenal returned to the Lane once more with the chance to secure the title on their rivals’ turf.

Spurs had lost five and drawn one of their previous seven matches, whereas Arsenal had so far yet to be beaten all season. The hosts, at least, had plenty to play for as they sought to fend off the threat of relegation but they were 2-0 down inside 34 minutes courtesy of Patrick Vieira and Robert Pires.

Spurs, though, mustered up some fight in the second half and unfortunately for Arsenal, Jens Lehmann did too. After Jamie Redknapp pulled one back for Tottenham, the daft German got unnecessarily involved with Robbie Keane and gifted Spurs a late penalty, which Keane duly dispatched.

It was a strange climax to the game, with Tottenham delighted to earn a point and in no way eager to restart play to find the winner that would have denied Arsenal the title – temporarily at least – and ruin their unbeaten record. The match report filed for the Tottenham website explained: “The point could prove crucial – with Leeds losing against Portsmouth, it leaves us seven points clear of the relegation zone with three games left.

“Oh, and Arsenal won the title.”

Arsenal 5 Tottenham 2 (Premier League, February 26, 2012)
The Gunners could not have realised at the time how precious these points would be. On the day, they were playing for local pride and redemption after damaging defeats to AC Milan in the Champions League and Sunderland in the FA Cup.

Their fragile confidence could have been eroded completely when Spurs found themselves 2-0 up after 34 minutes thanks to a deflected goal and a dubious penalty decision that could have sent them 10 points clear of Arsenal had they hung on. But Bacary Sagna and Robin van Persie levelled matters before half-time before the hosts blew Harry Redknapp’s Spurs away after the break with a tap in for Tomas Rosicky and a Theo Walcott brace.

The victory was the third of nine wins in 10 games that eventually led to Arsenal overhauling Spurs for third place on the final day of the season. Then, even more hilariously for Arsenal fans, Spurs missed out on the Champions League spot their fourth-place finish entitled them to thanks to Chelsea winning the European Cup and taking the place for themselves.