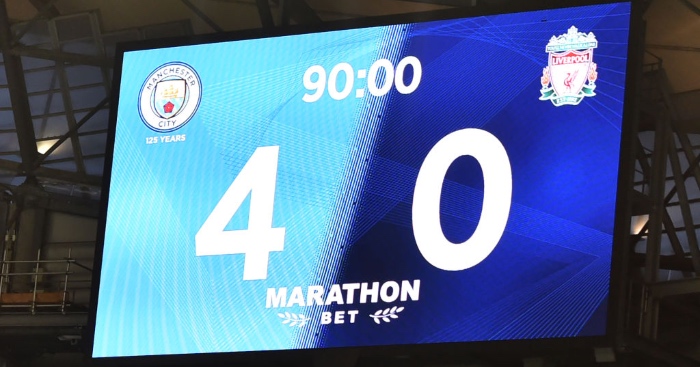 After Liverpool’s 4-0 defeat at the Etihad, Klopp claimed: “I saw a brilliant attitude. I saw fight. We didn’t behave like somebody who became champions a week ago.” Which is surely far more worrying to Liverpool fans than admitting they just couldn’t really be bothered – they wouldn’t be the first.

Here are the top five Premier League defeats of the champions..

5) Tottenham 3-1 Manchester United – May 19 2001
After sealing their third consecutive Premier League title, United gave up. The 3-1 loss to Spurs on the last day of the season was United’s third on the trot as they doubled their league defeats for the season after wrapping up the title. Willem Korsten notched two of his three Premier League goals and Les Ferdinand finished the Red Devils off with a 25-yard strike into the corner.

Both clubs could be forgiven for their focus being elsewhere, with the futures of Alex Ferguson and Sol Campbell somewhat uncertain. There was speculation as to whether it would be Ferguson’s final game at the club – people clearly hadn’t learned to take any rumours of the manager’s future at Old Trafford with a fistful of salt.

It would be Campbell’s last game for Spurs; he moved to Arsenal for free in the summer and broke United’s stranglehold over the title the very next season.

What happened next
They lost the Charity Shield to Liverpool at the start of next season before finishing third behind them and Arsenal, who won their second Premier League title.

4) West Bromwich Albion 3-0 Chelsea – May 18 2015
Chelsea romped to the title, in perhaps the last show of true greatness from Jose Mourinho, who’s now just wasting time. The defeat to the Baggies was just their third in a season dominated by Player of the Year Eden Hazard and new signings Cesc Fabregas and Diego Costa.

What happened next
The Irritable One. Mourinho was sacked in December, with Chelsea 16th in the table after nine Premier League defeats, and he’s not been the same since. Guus Hiddink came in at Stamford Bridge to lead them into the top half of the table.

3) Middlesbrough 4 Leeds 1 – August 22 1992
This is cheating a little bit. Howard Wilkinson’s Leeds had won the final league title before the formation of the Premier League and thus the foundation of football itself in 1992. This was their third game of the inaugural campaign.

United took four points from their first two games, but ran into a roadblock in Middesbrough in their third game and never truly recovered. Boro had just been promoted after three years in the second tier, but played Leeds off the park from the outset.

Paul Wilkinson had two goals by the eighth minute, and Boro went on to go 4-0 up with less than an hour played. Cantona provided the late consolation for Leeds.

What happened next
The Premier League has still never seen a more disastrous attempt at a title defence than Leeds. They ended up finishing 16th, just two points outside the relegation zone – where you could find Middlesbrough.

2) Liverpool 4-0 Arsenal – May 6 1998
Still basking in the memory of Tony Adams, arms outstretched having scored the fourth in Arsenal’s title-winning game against Everton at Highbury, the Gunners lost by the same margin to Liverpool at Anfield. Michael Owen got one and Paul Ince scored a brace against a much-changed Arsenal side.

Arsene Wenger opted to rest his players for the last two Premier League games, with his eye instead on the FA Cup final against Newcastle and a historic double.

What happened next
Dwight Yorke scored a penalty at Villa Park to condemn them to two Premier League defeats on the bounce, before goals from Marc Overmars and Nicolas Anelka at Wembley won the FA Cup for Gunners.

1) Manchester City 4-0 Liverpool – July 2 2020
Kevin De Bruyne, Raheem Sterling and Phil Foden scored first-half goals, and were all brilliant. Manchester City are now favourites for the Premier League next season as people immediately disregard the 20-point gap and claim City are actually the best team in the division.

For some proper analysis, here’s 16 Conclusions.

What happened next
Liverpool lose their last six games of the season and Jurgen Klopp is sacked because next season means more/Aston Villa feel the wrath of an angered beast on Sunday.