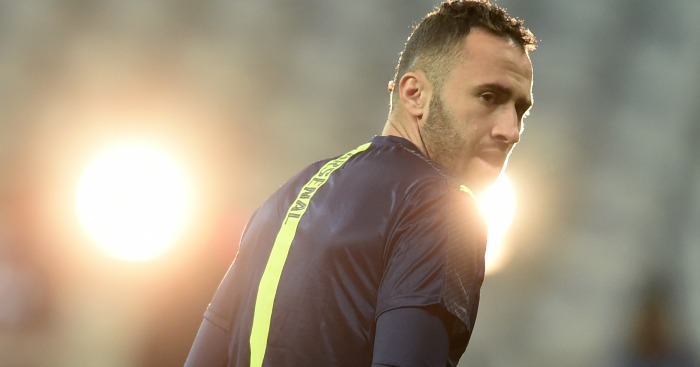 FA Cup weekend gives the top flight’s cup keepers the opportunity to shake the dust off their gloves and stretch their legs around a penalty box, rather than seizing up on the bench. But of those obviously cast by their managers as stand-ins, who is most likely to shine when it is their turn to step into the spotlight?

5. Sergio Romero (Manchester United)
Romero seems to have won the trust of Jose Mourinho, who has handed the gloves to the Argentinian on seven occasions this season. The keeper made 14 appearances under Louis van Gaal last term, who remembered what Romero did for him during a title-winning season together at AZ Alkmaar in 2008-09. It’s lucky for Romero that Van Gaal had a good memory, because the two seasons prior to his United switch were spent on the benches of Monaco and Sampdoria, with neither club convinced by him.

His Argentina coaches have never doubted Romero, though. Indeed, the 29-year-old has played more international games since 2013 than he has managed at club level, including a World Cup final in 2014.

Obviously any goalkeeper standing in for David De Gea is going to look poor in comparison. But despite some shaky moments with the ball at his feet, Romero hasn’t let United down when he has been called upon. The Olympic gold medallist has provided a safe pair of hands, which is all Mourinho requires of his No.2.

4. Michel Vorm (Tottenham)
There were a few raised eyebrows when the Holland stopper swapped the Swansea goal for the Tottenham bench. Vorm may have weighed up the likelihood in 2014 of Hugo Lloris staying at Spurs long-term and decided to gamble on there being an opening soon, or perhaps he was simply willing to forfeit playing time for a big pay increase. Regardless, a change is required if Vorm values his international future.

“With the keepers I have a problem,” Holland coach Danny Blind said recently. “Michel Vorm plays really good, but is only just playing in the FA Cup.”

By the end of the season, Vorm will have completed three years as Lloris’s understudy and that’s long enough for a stopper of his age and stature to play the role of cup keeper. Vorm has showed himself in eight appearances this term – including four in the Premier League – that he is still as capable as the the day he surrendered the No.1 spot at Swansea, and the comfort at which he deals with the ball at his feet is sure to appeal to the modern coach who wants his keeper to double up as a playmaker.

3. Asmir Begovic (Chelsea)
The Chelsea No.2 saw more game time last season than even he might’ve expected, despite his public declarations that he wasn’t going to just settle for the Stamford Bridge bench after leaving Stoke in 2015. Begovic played 25 times last term but was promptly removed from the posts as soon as Thibaut Courtois was fit enough again to pull on a pair of gloves.

Antonio Conte was prepared to let Begovic leave last month if he could source an equally talented bench-warmer, with the keeper admitting he is “desperate to play”. The best thing anyone can say of his spell at Chelsea is that he has not harmed his reputation and his impressive showings for Stoke were not so long ago as to be forgotten.

That means the 29-year-old will be in demand when he becomes available in the summer, with Everton, West Ham and Bournemouth likely to be among the clubs eyeing an upgrade on what they already have guarding their goal.

2. Adrian (West Ham)
It’s been quite the fall from grace for Adrian. A season that started with a call-up to the Spain squad looks like ending on the bench before a free transfer in the summer.

After being undisputed No.1 for more than two seasons, Adrian was dropped in November after a couple of mistakes during West Ham’s poor start to the campaign. The 30-year-old swapped roles with Darren Randolph and became the club’s cup keeper, only for West Ham to be dumped out of the EFL Cup by United and the FA Cup by City, conceding nine goals in two games against the Manchester rivals.

Adrian was seen as one of the club’s biggest assets not long ago and it is unclear exactly what is behind his slump. With West Ham supposedly eyeing Joe Hart in the summer – they’ll end up with Simon Mignolet, probably – it’s clear that Adrian’s days are numbered, with Bilic around at least. Whoever takes Adrian should be getting a decent keeper with a point to prove.

1. David Ospina
‘Ospina should not be playing in the Champions League. He needs to be sold,’ wrote Charlie Wyett in The Sun on Thursday, after being tasked with ‘OSPINA WATCH’ at the Allianz Arena. You could draw many scathing conclusions from a miserable night for Arsenal, but that should not have been one of them.

It was a questionable selection from Arsene Wenger. To willingly take on Bayern Munich on their own patch without your first-choice goalkeeper is a hard one to justify, even if the reasons are understandable. But the Arsenal boss keeps his promises to his keepers, which Ospina discovered to his detriment when, as first choice in 2015, he was left out of the FA Cup final team, with Wojciech Szczesny selected, despite it being clear the Pole had no immediate future at the club.

David Ospina against PSG. He was tremendous yesterday. Massive credit to him.

Wenger trusts the Colombia keeper, and why wouldn’t he? Aside from a calamitous error against Olympiacos last term, Ospina has never let Arsenal down. His display against PSG earlier this season proved that a season on the bench under Cech hasn’t slowed his reflexes and while the 75-cap Columbia custodian might never regain the No.1 spot at Arsenal, there are few better stand-ins.