Home All The News Top five: Southgate’s next England debutants 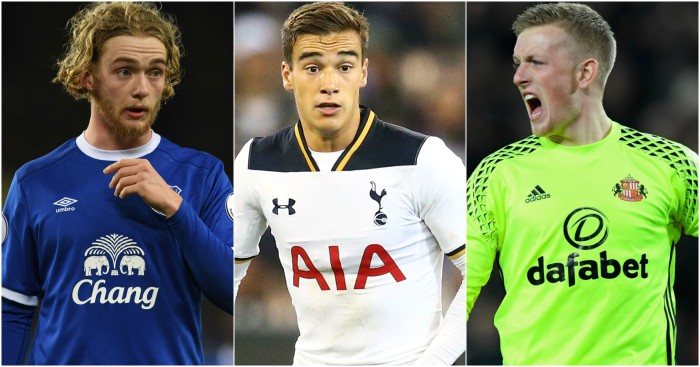 You might notice this list does not include Ben Gibson. That’s because we are discounting those in the current squad yet to make their debut. Deal with it.

Jordan Pickford:
The days of having to call up the likes of Frankie Fielding, Scott Loach and Joe Lewis just because they’re English and know how to put their gloves on the correct hands, mercifully, seem to be over. Gareth Southgate isn’t short of goalkeeping options, with Joe Hart apparently having straightened himself out at Torino, Tom Heaton in decent form and Jack Butland coming towards the end of a long road to recovery.

But Pickford, like Butland before his injury, has caused quite a stir behind an atrocious defence at Sunderland every week. The 23-year-old is back with the Under-21s after a stint with the seniors before Christmas, but looking ahead to the World Cup next summer, Pickford looks a safe bet for a squad place, at least as the much-maligned number three.

Some say Sunderland, given their current plight, is not the ideal environment for a young keeper to develop, but the academy graduate is playing almost without pressure or expectation, and he’s certainly getting a lot of practice. Southgate will be keen to see what his Under-21 stopper can do under greater scrutiny.

Harry Winks
The Tottenham midfielder was reportedly close to being included in the current senior squad, despite having made ony two Premier League starts for Spurs and one appearance in the Under-21s.

That was perhaps driven by reports that the 21-year-old was being eyed by Spain, which turned out to be utter b*llocks. But, in an impressive Spurs team, Winks has demonstrated why England would be loathe to lose him.

Though he has been eased into the first-team picture gradually, that doesn’t mean he hasn’t earned Mauricio Pochettino’s trust. The midfielder retains possession but also looks for the penetrative pass. Jake Livermore got the nod to stand in for Jordan Henderson this week, but it won’t be long before Winks gets his audition.

Demarai Gray
The Leicester winger has yet to start for Leicester since Craig Shakespeare took the Foxes back to basics, but Gray has done much of his best work from the bench.

Gray offers something few others in the England squad currently do: the pace and trickery to beat opponents on either side. The 20-year-old can play on either flank, and Southgate already knows him well from his time with the Under-21s, having given him a first cap at that level almost exactly a year ago. An impressive one it was too: “It was a super debut,” said Southgate. “He was a threat all night and I think the work he did at the goal was exceptional but he also put a real shift in for the team and did his work off the ball.”

Like most young wingers, Gray currently lacks consistency, but having progressed through the four national age groups from Under-18, with two goals and an assist in three starts and two substitute appearances for the Under-21s, a senior call up is the natural next step.

Tom Davies
Davies has captained England Under-16s, Under-17s and Under-19s. He has also trained with the senior squad during Roy Hodgson’s reign, and given the way he has taken to life in the Everton first team, a call-up to Southgate’s squad is unlikely to faze the midfielder.

The big-money signing of Morgan Schneiderlin certainly hasn’t. Davies has retained his place in Ronald Koeman’s XI, performing a number of central midfield roles. Ross Barkley looked after the 18-year-old when he trained with Hodgson’s seniors 18 months ago, and Davies is returning the favour, with many crediting the youngster’s presence for Barkley finding the space he needs to show his quality.

Davies’ versatility is sure to appeal to the England manager but the teenager has shown he has the talent, temperament and tactical nous to make the step up to the senior squad, even if it is a temporary one before perhaps settling with the Under-21s for a spell.

Is this pass from Tom Davies intentional or not? This is important. https://t.co/w5jOih4VHR

Joe Gomez
Were it not for a knee injury that kept him out for over a year, the Liverpool youngster may well have been capped already.

The former Charlton defender is being eased gently back in to the fold by Jurgen Klopp, who says Gomez “has all the attributes you need to succeed at the very highest level in his position”. That position, presumably, is centre-half, though the 19-year-old has played in both full-back positions. Crucially for Southgate, he appears well suited to playing in a back three.

Gomez is currently with the England Under-21s for their double header against Germany and Denmark – his first international action for almost 18 months. The European U-21 Championships in Poland this summer provide the perfect platform for the defender to prove himself again to Klopp and Southgate. If he can force his way into the Liverpool XI at the start of next season, a senior call will probably follow very swiftly.