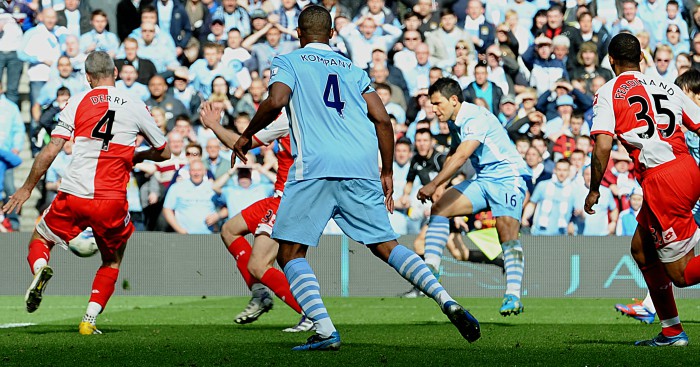 Manchester City could possibly seal the Premier League title by beating Manchester United in the derby on April 7. It’s a fitting way to wrap it up, but it’s not even the best way City have clinched the title…

5. Chelsea 2009-10
The Blues went toe-to-toe with Manchester United, who had won the previous three Premier League titles, all the way until the final day. A 2-0 win at Liverpool in the penultimate game, thanks in no small part to Steven Gerrard’s first-half mistake (sound familar?) meant that Carlo Ancelotti’s side approached their last match at home to Wigan knowing that a victory would hold off United, who were also at home to Stoke.

Nicolas Anelka settled whatever early nerves there may have been by breaking the deadlock after six minutes. After Frank Lampard scored from the spot on 32 minutes following Steven Caldwell’s red card, Chelsea looked home and hosed, despite United also leading by the same score.

The Blues made absolutely sure by smashing in six more after the break. An 8-0 victory saw Chelsea finish the season with a record-breaking 103 goals, with 17 of those coming in their final three games, all without reply. Ancelotti took his side to Wembley the following week, where they wrapped up a Double by beating Portsmouth in the FA Cup final.

4. Man Utd 1998-99
Throughout their 13 Premier League titles, United have had it wrapped up before the final day on 10 occasions.

In 1996, they had to win at Middlesbrough, which they did with ease. In 2008, victory at Wigan would have been enough and it was secured with two second-half goals, with Bolton’s late equaliser at Chelsea giving the triumph a little more gloss.

In 1999, though, United secured the first part of their Treble on home soil, after being given a fright by Tottenham. On the last day, needing to match Arsenal who were at home to Aston Villa, United went behind after Les Ferdinand’s lob bounced into the roof of the net.

Nerves were shredded and David Beckham’s brilliant equaliser before the break did little to ease the tension. Andy Cole was dispatched from the bench at half-time, and it turned out to be his lob that eventually sealed the victory, which remained in doubt until the last kick.

It was the first time since the era of Sir Matt Busby that United had sealed the title at Old Trafford, and the only time since when they have done so on the final weekend.

3. Arsenal 2001-02
After finishing runners-up to United in all of the previous three seasons, Arsene Wenger’s side put a 19-game unbeaten run together to put them firmly in the driving seat towards the end of the 2001-02 season.

After 11 consecutive wins, their penultimate game of the season took the Gunners to Old Trafford on a Wednesday night. With the FA Cup already in the bag after beating Chelsea in Cardiff the previous weekend, Arsenal just needed to beat United to secure their third Double.

United weren’t going to go down without a fight – literally. “Arsenal kept their composure in the face of a fierce early physical assault from United as Ferguson’s side relinquished their crown in graceless fashion,” read the BBC match report. Paul Scholes, Phil Neville and Roy Keane’s robust challenges failed to provoke the visitors into anything other than upping their game.

Sylvain Wiltord’s only goal 10 minutes into the second half was enough to claim the three points and Wenger’s second Double. A 4-3 win over Everton on the final day was the icing on the cake, while United drew at home to Charlton to slip to third.

2. Blackburn 1994-95
Liverpool faced a dilemma on the final day when Kenny Dalglish brought his Blackburn to Anfield. Rovers were two points clear of Man Utd but had an inferior goal difference, so anything but a win at Anfield would open the door for the Red Devils, who were at West Ham. By denying Kenny Dalglish’s side three points, Liverpool would open the door for their hated rivals while breaking the heart of one of their most famous sons.

It all turned out swimmingly for Liverpool. After going behind to Alan Shearer’s opener, they fought back in the second half, with John Barnes’ equaliser being followed by Jamie Redknapp’s free-kick in added time. While all that was going on, United were chucking the kitchen sink at the Hammers while being held 1-1.

If Liverpool had done their job for United, so too had Ludek Miklosko for Rovers. The Irons stopper repelled everything, most memorably denying Andy Cole late on. It finished first at Upton Park, making Redknapp’s late free-kick irrelevant, despite Clive Tyldsley’s ‘Oh my God!’ reaction. United drew, Liverpool won, Kenny was a champion after being put through the wringer and Anfield celebrated.

1. Manchester City 2011-12
“I swear you’ll never see anything like this ever again!” Martin Tyler’s probably right, you know.

Is there a more picture-perfect way to win the title? The way Roberto Mancini’s side dangled the title under the noses of United before snatching it back from them in the last seconds probably won’t be repeated. And even if it is, it’s been done before.

City looked like they had blown it but United returned the favour by losing at Wigan, chucking away a 4-2 lead to draw 4-4 with Everton. In the third-to-last game of the season, the derby rivals met and Vincent Kompany put City in the driving seat with two games to go.

Upon the final day, City just had to match United’s result and at half-time, they were doing exactly that. Pablo Zabaleta had given City a lead just before the break, while United led at Sunderland. Then it all went bananas…

Typical City, they went 2-1 down in the 66th minute to the Premier League’s worst away side, with Jamie Mackie’s goal following Joey Barton’s red card and his hilarious attempt at ‘taking one with him’. QPR, who weren’t sure of survival until the final whistle elsewhere, held out until it became clear they were safe. In the second minute of added time, substitute Edin Dzeko got above Nedum Onuoah to head an equaliser but it still wasn’t enough.

City came one last time. You know the rest…