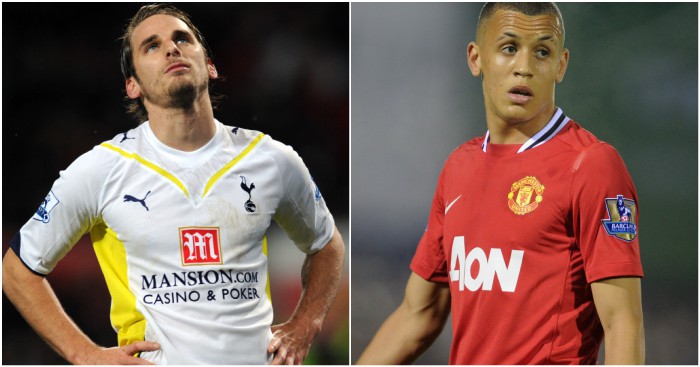 5) Adnan Januzaj
The player who sparked this list after he discussed his fall from grace at Old Trafford and his ‘difficult years’ under Louis van Gaal, Januzaj is remembered as probably the only good thing about Manchester United’s 2013/14 season, aside from David Moyes’ departure.

Aged 18, Januzaj was named on the bench for Sir Alex Ferguson’s final game in charge of the club – a 5-5 draw at West Brom – but the Belgian had to wait until October 5 for his first start, in which he scored two goals in a 2-1 win at Sunderland. A fortnight later, fearing that the club’s hottest property could walk away at the end of the season for minimal compensation, Ed Woodward and Moyes were pictured either side of Januzaj as he signed a new lucrative five-year contract. He was then nominated as BBC Young Sports Personality of the Year after ten games in the first team. That was as good as it ever got.

Van Gaal replaced Moyes and squeezed the life out of Januzaj. With neither a goal nor an assist in 21 appearances in Ryan Giggs’ No.11 shirt during his sophomore season, he was loaned out to Borussia Dortmund for 2015/16. Januzaj was back prematurely, however, after just six substitute appearances in the Bundesliga. Another loan, reuniting him with Moyes at Sunderland last season, saw the winger booed by his own supporters. Going nowhere fast, Jose Mourinho allowed him to slope off to Real Sociedad in the summer.

4) Jack Wilshere
Dubbed as the next Paul Gascoigne, it has never been plain sailing for Wilshere. At the age of just 16 years and 256 days, Wilshere was given his Arsenal debut as a substitute in a Premier League match against Blackburn in September 2008. He made the odd appearance over a couple of seasons and spent part of the 2009/10 campaign on loan at Bolton. A pre-season friendly in 2010 led The Guardian to report at the time that Wilshere was ‘showing a level of control and composure that defied belief given his youth…There can be no doubting the potential of the player.’ In 2010/11 he made his breakthrough season – turning in a number of eye-catching performances for the Gunners and playing 49 matches in all competitions. A star was born…or so we thought.

Seven years later and Wilshere hasn’t managed over 35 appearances in a season since. A series of injury-plagued years curtailed his progress, with two seasons pretty much wiped out by his mid-20s. The England international has also been involved in a number of high-profile incidents, even accepting a warning for attempting to spit at a taxi driver who was wearing a Tottenham hat.

In this age of super-athletic footballers, Wilshere has been accused of not looking after himself, having been pictured smoking a few times in the past. Not that having the odd cigarette is anything out of the ordinary, but it hasn’t helped his image.

It will have been frustrating for Wilshere that his rhythm and consistency was interrupted by constant injury problems, but that does not excuse that fact that he has rarely taken a game by the scruff of the neck, especially during two relatively injury-free campaigns from 2012 to 2014. We all remember his excellent display against Barcelona back in 2011, but performances like that are now a distant memory. Luckily for Wilshere – who spent last season on loan at Bournemouth – at the age of 25, he still has time to arrest his slide

3) David Bentley
Anyone nicknamed the ‘new David Beckham’ is likely to be on a slippery slope from there on out. For David Bentley this was a tag bestowed upon him by Steve McClaren when he was called into the England squad by the ‘Wally with the Brolly’. To be fair to McClaren, you could see the similarities with his wicked delivery, occasional stunning strike and ever-changing haircuts.

After making only nine first-team appearances under Arsene Wenger at Arsenal, Bentley joined Blackburn Rovers following a decent loan spell with Norwich. And it was his time at Ewood Park that really put him on the map as a top talent. A first senior hat-trick in his first match against Manchester United was a particular highlight as he put his name up in lights. The 2006/07 season saw him earn the club’s Player of the Season award as he bagged seven goals and provided 13 assists for his team-mates. Another terrific campaign followed at Blackburn and Tottenham signed him for £15million in the summer of 2008.

Seen as the big move that would catapult Bentley to the very top of the game, it never really worked out at Spurs. A 43-yard dipping volley against arch-rivals Arsenal in a 4-4 draw was the highlight of his time at White Hart Lane, as he quickly fell behind Aaron Lennon in the pecking order. Four loan spells at Birmingham, West Ham, FC Rostov and Blackburn followed, before he announced his retirement from football at the age of 29. In an interview with the Daily Mail, Bentley said he had fallen out of love with football, describing it as “robotic and boring” and that he was too “free-spirited” to carry on.

2) Michael Johnson
“Everyone was sure he would be the next big star for England,” said Sven Goran-Eriksson, who put Johnson in the centre of his midfield at Manchester City. Johnson’s partner, Didi Hamann was equally sure the the teenager would make the grade: “I always say a special midfielder needs to have the main attributes – passing ability, a good engine, strong tackle, vision, intelligence – and to be absolutely outstanding with one of them,” the German told the BBC. “I can honestly say Michael was outstanding in all these areas.”

Johnson was described as everything from the new Colin Bell to the next Steven Gerrard. Hamann, who played with both Johnson and Gerrard, thought the younger man more than held his own in the comparison: “Stevie had tremendous technical and athletic gifts, but when he first came through at Liverpool, his understanding of the game wasn’t what it could have been. He would admit that himself. Michael was different though; he had an innate understanding of the game.”

It wasn’t enough. Injuries stopped his progress dead and the mental strain became greater than the physical for Johnson. This was when mental health was still a taboo subject in football and two and a half years after his last league game for City, in which time he had been arrested twice for drink-driving, he was released by the club. Johnson asked to be “left to live the rest of my life” and since leaving the “toxic” environment of football, he has been involved in opening a bar and his own estate agency.

1) Ravel Morrison
‘Ravel Morrison might be the saddest case,’ Ferguson wrote in his 2015 autobiography. ‘He possessed as much natural talent as any youngster we ever signed, but kept getting into trouble. It was very painful to sell him… he could have been a fantastic player. But, over a period of years, the problems off the pitch continued to escalate and we had little option but to cut the cord.’

Morrison can’t say that United didn’t try. This is a club that knows a talented player when he comes along, and many believed Morrison to be up there with the likes of Giggs and Paul Scholes. Rio Ferdinand described him as “the best kid I’ve ever seen” and even offered to move him into his family home in an effort to put him on the straight and narrow, and keep him there. The club stood by him, even when he pleaded guilty to two counts of witness intimidation, but despite the efforts of seemingly everyone at Old Trafford, it was an impossible job.

Ferguson reluctantly gave up and allowed Morrison to leave United, believing a move to London and away from Manchester might help the young talent. The United boss told Sam Allardyce at West Ham: “If you can sort this lad out, Sam, you’ll have one of the best players you’ve ever had.” Allardyce couldn’t, nor could Harry Redknapp at QPR, Lee Clarke at Birmingham, Cardiff’s Russell Slade, Stefano Pioli at Lazio, or Ian Holloway back at QPR.

Despite some glimpses of the talent he so obviously had, Morrison could not retain the focus required to put roots down at any club. Mexican outfit Atlas are the latest side to take a punt on the 24-year-old. Oh and at Atlas he will be captained by Rafael Marquez, the ex-Barcelona star who in August denied US accusations of links with a drugs cartel.