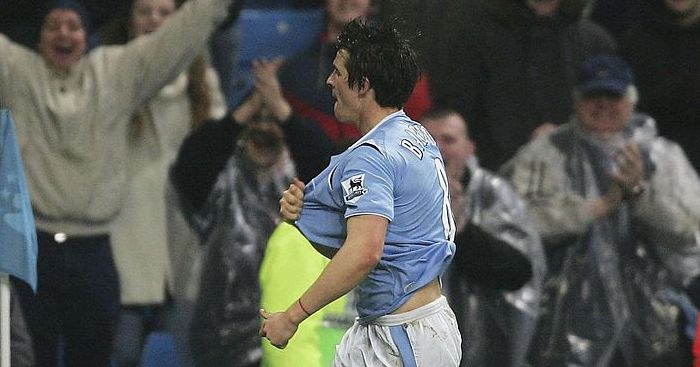 Newcastle started the 2019/20 Premier League season by spending £40m on a striker and ended it with Jonjo Shelvey on 50 per cent more goals than anyone else. These six clubs had marginally more embarrassing top scorers.

Karlan Grant (4, Huddersfield, 2018/19)
The dubious honour of having a top scorer on just four Premier League goals for the entire season is shared by three clubs: Huddersfield’s table-proppers of last campaign, Derby and Wimbledon.

What separates the exploits of Karlan Grant from those of Kenny Miller (2007/08) and Messrs Cort, Ekoku, Euell, Hughes and Leburn (1997/98)? The fact Huddersfield signed the striker on the penultimate day of the January transfer window and he still managed to lead their goalscoring charts in 13 appearances, having spent the previous three years playing in Leagues One and Two. That’s what.

Jordon Mutch (7, Cardiff 2013/14)
Sitting level with Daniel James and Jesse Lingard on a list of Premier League scorers under Ole Gunnar Solskjaer are Steven Caulker and Jordon Mutch (three goals each). Their combined efforts could not quite keep Cardiff in the division six years ago, even with the similarly scant contributions of Fraizer Campbell.

Only one of those would go on to ply their trade under Jurgen Klopp, and it most certainly was not Mutch. The midfielder did manage to score three times against Liverpool, including twice in a 6-3 defeat, with only one of his goals coming in a victory. That earned him and his three middle names a move to QPR, whose own subsequent relegation resulted in Crystal Palace’s January 2015 swoop. He did not score a single goal in 51 games for those two sides.

Mutch is playing deep while Gunnarsson plays off Campbell up top. There are no words for Solskjaer's cluelessness.

Joey Barton (6, Manchester 2006/07)
By the time David Unsworth’s best mate handed a transfer request into Manchester City in late January 2006, the club had already scored their final home goal of the entire season. The midfielder was on five with Giorgios Samaras (four) and Bernardo Corradi (two) the only others to have notched more times in the Premier League for City than Blackburn’s Andre Ooijer.

A disinterested and demotivated Barton would score just once more – against Fulham in April – to win the slowest and most dispiriting Golden Boot race imaginable. In all honesty we should have seen it coming: two years earlier Stuart Pearce resorted to putting David James up front for the final minutes of a game City had to win, all while actual £5m striker Jon Macken watched in horror from the bench. And it would be seen as one of the great tactical heists in history if Robbie Fowler had scored that stoppage-time penalty.

Jiri Jarosik (5, Birmingham 2005/06)
Birmingham went through the entire top goalscorer gamut during their first spell in the Premier League. From the striker that came up with them in Clinton Morrison (six goals, 2002/03), to the loanee on a random streak in Mikael Forssell (17 goals, 2003/04), then the dutiful veteran Emile Heskey (ten goals, 2004/05) and finally the forgettable midfielder Jiri Jarosik (five goals, 2005/06). Finishes of 13th, 10th, 12th and 18th could not be much more Steve Bruce if they tried.

Jarosik clashed with the manager but produced at least as much as anyone else in blue, which admittedly meant little in a squad that fused the eclectic stylings of Muzzy Izzet, Walter Pandiani, David Dunn, Stan Lazaridis, Nicky Butt, Mario Melchiot, DJ Campbell and Chris Sutton.

His goals even helped earn ten of Birmingham’s overall 34 points. Headers in a 3-2 win, a 1-1 draw and a 5-0 victory against West Brom, Portsmouth and Pompey again in August, September and January respectively preceded a glorious strike against Bolton that lifted the club out of the relegation zone in April. But unworthy Premier League winner Jarosik missed three of Birmingham’s final four games as they slid back from whence they came.

Claus Thomsen (5, Ipswich 1994/15)
“If we finish the season with our top scorer on five goals it will be the lowest of any player at any of my clubs in 24 years as a manager,” said Joe Royle in March 2006. Sam Parkin and Jimmy Juan had both reached that mark as the campaign edged towards its conclusion but Nicky Forster heeded the manager’s call on ended with seven.

Five goals in a season remains the record low bar set for an Ipswich top scorer; it just so happens that Royle himself subsequently signed that very player. Claus Thomsen joined Everton in January 1997 after two and a half years at Portman Road, in which time he suffered relegation, missed out on the First Division play-offs by two points and provided social-media content during a global pandemic without even realising.

You can see why…

That Craig Forrest, starting goalkeeper for a side that lost 9-0 and conceded 93 goals in 42 games, was named Player of the Year by both supporters and peers said it all. Thomsen was his closest contender for either accolade, the defender scoring as many goals from November 19 to Boxing Day as any of his teammates managed all season. Royle was suitably and eventually impressed. Everton fans were not.

Anthony Le Tallec, Liam Lawrence, Tommy Miller and Dean Whitehead (3, Sunderland 2005/06)
In terms of top-flight incompetence, few can hold a melted candle to close friends of Newcastle, Sunderland, both in general but specifically in 2005/06. They lost five straight Premier League games on three different occasions, set a points bar only the Derby of two seasons later have ever managed to lower, and finished the campaign with no player on more than three goals.

The quartet that managed such ludicrous numbers included Champions League winner Anthony Le Tallec, Mansfield Town legend Liam Lawrence, 1999/2000 and 2000/01 Third Division Team of the Year member Tommy Miller and promotion specialist Dean Whitehead. Any two of those four only scored in the same game once: of course it was against Tottenham.