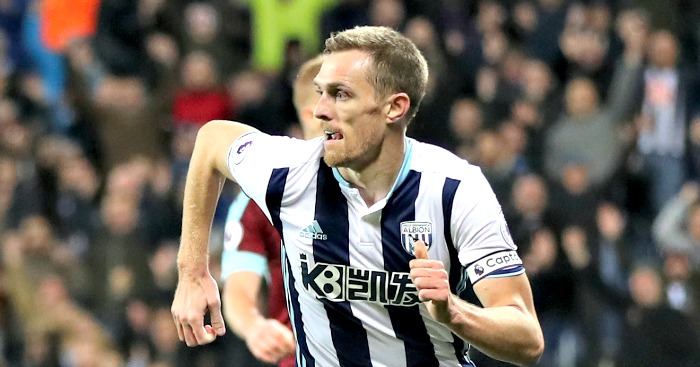 5=) Scotland (14 goals – James McArthur 4, Robert Snodgrass 4, Matt Phillips 2, James Morrison 2, Shaun Maloney 1, Darren Fletcher 1)
Well this was a late addition after West Brom’s band of Scotsmen struck on Monday night. There may only be 18 of them playing in the Premier League – and none in the top six – but they are making a wee impact. They only scored 23 goals in the whole of last season so they are way, way ahead of schedule. You may note that McArthur did not even make the Scotland side to face England.

5=) Argentina (14 goals – Sergio Aguero 8, Manuel Lanzini 3, Roberto Pereyra 2, Erik Lamela 1)
Perhaps surprisingly above Brazil in this list – by one goal – despite the phenomenal form of Philippe Coutinho and Roberto Firmino, who are being severely let down by Antonio Conte’s anti-Brazilian policy at Chelsea. Although Sergio Aguero is scoring the bulk of his country’s Premier League goals, the curling beauty from Watford’s Roberto Pereyra and penalty from Manuel Lanzini at the weekend moved them onto 14. That’s a goal every 492 minutes of Premier League football by Argentine players this season, which sounds pretty poor until you read that Ireland’s record is one goal for every 1,713 minutes played. The top-scoring Irishman? Seamus Coleman. Shane Long, hang your head in shame.

4) France (16 goals – Etienne Capoue 5, Olivier Giroud 3, Laurent Koscielny 2, Paul Pogba 2, assorted other Frenchmen 4)
Down from second last season (we’re largely blaming Anthony Martial) are France, whose players have logged marginally more minutes than Belgium but have somehow scored nine fewer goals than their neighbours. France have several players – Martial, Dimitri Payet, Olivier Giroud – not reaching the dizzy heights of last season, which makes us wonder whether there’s a Euro 2016 hangover clouding the heads of some? After all, the newly prolific Capoue had the summer off.

3) Belgium (27 goals – Romelu Lukaku 7, Eden Hazard 7, Nacer Chadli 4, Christian Benteke 4, assorted other Belgians 5)
A goal every 412 Premier League minutes played by a Belgian, making them the most effective nation on this list. Which would make us think that being awful at the Euros was an advantage if we weren’t working up/down to some pretty underwhelming English statistics. Bizarrely, since Belgium were the Premier League’s 15th most prolific nation in 2011/12 (behind Emmanuel Adebayor’s Togo), they have occupied third position every single year since. You may note that 2012 was the year that Hazard and Benteke arrived, Lukaku went to West Brom and we all became a little bit Belgian.

2) Spain (27 goals – Diego Costa 10, Juan Mata 3, Nolito 3, assorted other Spaniards 11)
Second only to England in terms of minutes played, and way ahead of Belgium, but Spain’s goals ratio is skewed by a glut of goalkeepers and full-backs. Although a goal every 764 minutes played by a Spaniard is relatively poor (and worse than Scotland’s record), it is a huge improvement on last season, when Costa only netted 12 goals throughout the season. He really is so very much better now he’s embraced calm.

1) England (94 goals – Jermain Defoe 7, Michail Antonio 6, Harry Kane 5, Theo Walcott 5, Charlie Austin 5, assorted other Englishmen 66)
Well of course the English score more goals because there are roughly five times more Englishmen playing in the Premier League as Spaniards. Which means they probably should have scored 135 goals instead of 94. As it is, their goal ratio (one every 820 minutes) is actually worse than last season (every 725 minutes), which we can loosely blame on Jamie Vardy. Should we be worried that three of the top five scorers are not currently in the actual England squad? Probably, yes.