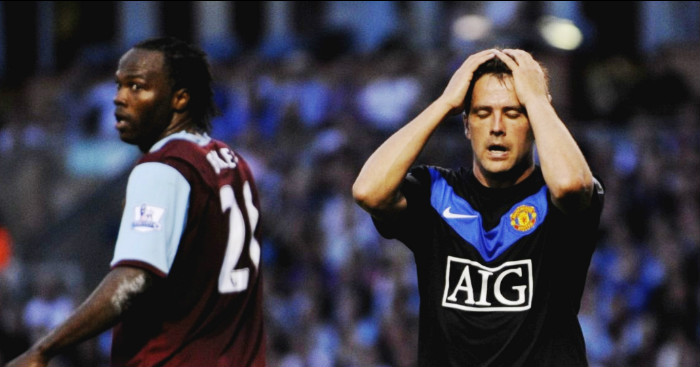 With newly-promoted Wolves taking on last year’s runaway winners Manchester City in Saturday’s lunchtime kickoff, we thought this was an opportune time to look at the most memorable surprise early-season victories against supposedly lesser opposition…

6) Hull City 2 Leicester City 1 – opening day, 2016/17
Leicester’s title triumph in 2015/16 was so scarcely credible in the first place that we all knew it couldn’t possibly last into the following season. But they would have liked to think they could at least get past managerless, newly promoted Hull.

Meanwhile, Hull caretaker boss Mike Phelan had just 13 fit players to choose from – two of whom were goalkeepers – following the most shambolic pre-season in Premier League history.

Hull’s opener came through a bizarre synchronised overhead kick on the stroke of half time, with both Adama Diomande and Abel Hernandez claiming it – Diomande was ultimately the man awarded with the goal.

Riyad Mahrez converted a penalty two minutes after the break to equalise, but Robert Snodgrass’ strike from the edge of the box condemned Leicester to become the first reigning champions to lose their opening game in 27 years.

What happened next
Leicester sacked Claudio Ranieri midway through the season and finished 12th under Craig Shakespeare.

Hull won their next game away to Swansea, too, earning Phelan the job on a permanent basis. His side then lost 13 of their next 18 and he was replaced by Marco Silva. Oops.

5) Arsenal 0 Charlton 0 – game 3, 1998/99
A glimpse at the previous year’s league table suggests that Arsenal had just eked out a title triumph by a single point, but in reality the Gunners had wrapped up the title with two games to spare after an incredible run of ten straight victories before resting players for the FA Cup final.

Just look at the vintage of that Arsenal line-up, and then consider that Alan Curbishley’s Charlton had just come into the Premier League for the very first time by beating Sunderland on penalties after a 4-4 draw in the play-off final.

A frustrating day for Arsenal only got worse on 58 minutes when Emmanuel Petit earned a yellow card for dissent before immediately throwing himself bodily into a foul to earn himself a second yellow.

Amusingly, the pre-match notes on Arseweb’s report of the game sees them terrified that Arsenal might be about to sign Manchester United striker Teddy Sheringham, who would end the season by scoring in the Champions League final. But hey! At least they had Christopher Wreh!

What happened next
Arsenal continued to struggle against lesser opposition, losing to relegated Wimbledon and drawing with Southampton. The title was again decided by a single point, but this time it was United who came out triumphant. They might have won one or two other trophies that year, I can’t remember.

Charlton recorded a 1-0 win over Liverpool later in the season, but were ultimately relegated before bouncing back at the first time of asking for a seven-year spell.

4) Bolton 2 Blackburn 1 – game 3, 1995/96
Younger readers may be slightly surprised that this suspiciously Championship-strugglers-looking fixture could ever have involved the reigning Premier League champions, but we promise you, we’ve checked in an actual book and it’s definitely true.

Title-winning manager Kenny Dalglish had departed the club that summer, leaving trusted assistant Ray Harford in charge. An Alan Shearer penalty against QPR got the new boss off to a wining start, but it was followed by a 2-1 defeat at Sheffield Wednesday.

Then came Bolton and Roy McFarland, himself a newly-appointed manager after predecessor Bruce Rioch had been headhunted by Arsenal after earning two promotions in his first three seasons at the club. As recently as 1988, Bolton had been in the fourth tier.

Fabian de Freitas put the Trotters ahead after 21 minutes of what should have been a grotesquely mismatched game, scoring a goal with Crap 90s Football-worthy effort.

What happened next
Blackburn finished a disappointing seventh and have never returned to the top of the table since. Bolton finished dead last.

We weren’t to know at the time that Burnley would actually turn out to be quite good: they had finished 16th the previous year after winning just one away game all season; Chelsea had won the title by seven clear points.

The wheels came off extraordinarily quickly. Gary Cahill was sent off for a lunge on Steven Defour just 14 minutes into his first season as Chelsea’s club captain, and by half time Burnley were 3-0 up, away from home to the champions, thanks to a Sam Vokes brace and one from Stephen Ward.

0-3 – Chelsea are three goals behind at half-time in a Premier League match at Stamford Bridge for the first time ever. Rout.

Alvaro Morata headed home a reply on his debut midway through the second half, but Chelsea were reduced to nine men when Cesc Fabregas picked up a second yellow card on 81 minutes.

Morata teed up Luiz for a close-range strike with two minutes to go, but the champions couldn’t find an equaliser.

What happened next
I mean…it was only last season? Are you OK hun?

Fine. Chelsea’s slow start ultimately cost them as they finished fifth, leading the Blues to replace Conte with Maurizio Sarri. Burnley surprised everyone by finishing seventh despite winning just five matches after December 12.

1968 – This is the first time that the reigning champions have suffered a defeat on MD1 in successive top-flight seasons since 1968. Shock.

2) Middlesbrough 4 Leeds 1 – game 3, 1992/93
Another of those games you now struggle to believe involved defending champions. Howard Wilkinson’s Leeds had won the final league title before the formation of the Premiership and thus the foundation of football itself in 1992. They had an iconic midfield consisting of Gordon Strachan, Gary McAllister, David Batty and Gary Speed, and were lent a certain je ne sais quoi by scarcely played French import Eric Cantona.

United took four points from their first two games, but ran into a roadblock in Middesbrough in their third game and never truly recovered. Boro had just been promoted after three years in the second tier, but played Leeds off the park from the outset.

Paul Wilkinson had two goals by the eighth minute, and Boro went on to go 4-0 up with less than an hour played. Cantona provided the late consolation for Leeds.

What happened next
The Premier League has still never seen a more disastrous attempt at a title defence than Leeds. They ended up finishing 16th, just two points outside the relegation zone – where you could find Middlesbrough.

1) Burnley 1 Manchester United 0 – game 2, 2009/10
We are quite accustomed to the Clarets’ presence in the Premier League now, but Burnley had been away from the top flight for 33 years when Owen Coyle – yes, Owen Coyle – led them to the big dance in 2009.

They had been promoted only via the playoffs and lost 2-0 away to Stoke in their opening game, only to stare down the barrel of a run of games reading Manchester United, Everton, Chelsea, Liverpool.

By contrast, Manchester United were at (one of) the absolute peaks of their powers under Sir Alex Ferguson. They had just won three league titles back-to-back and appeared in the last two Champions League finals, beating Chelsea in one and losing to Pep Guardiola’s Barcelona in the other.

Even with Cristiano Ronaldo departed for Real Madrid, Burnley had every reason to expect to be absolutely spanked in this Wednesday evening fixture.

Robbie Blake had other ideas, putting Burnley ahead just 19 minutes in, and goalkeeper Brian Jensen saved a Michael Carrick penalty shortly before the break, which is always lovely.

United racked up 18 attempts on the Burnley goal, but were unable to find a way through, earning Burnley a famous victory.

What happened next
United would end their three-year grip on the title to Chelsea and end the season with only the League Cup to console them. Burnley produced another shock 1-0 win over Everton in their following game, but couldn’t maintain their run and ended up relegated with just 30 points.