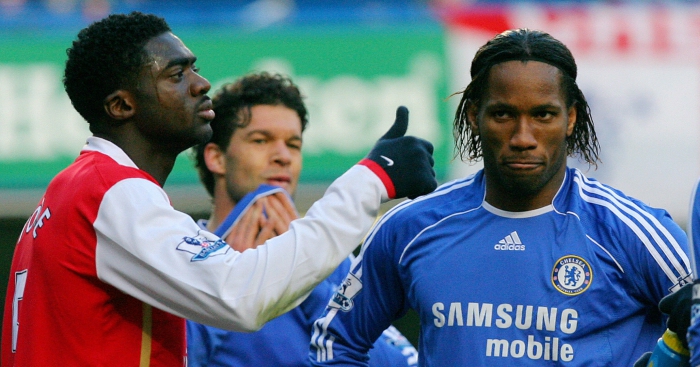 10) Yakubu Aiyegbeni
Yakubu scored in his first game against Premier League opposition in October 2002. He scored in his final game in the top flight in May 2012. And in that glorious decade in between, the Nigerian established himself as one of the most underrated strikers in the league’s history.

It was in that fixture in October 2002, playing for Maccabi Haifa against Manchester United in the Champions League, that Yakubu first caught the eye. “If I was you I’d get in your car and get him right away. We’ve watched him three times and he’s been electric,” was the advice Sir Alex Ferguson offered Harry Redknapp, who would bring him to Portsmouth two months later. The Nigerian helped guide them to the First Division title, before he was unleashed on unwitting Premier League central defenders.

But the Yak would not feast only on journeymen. “I love playing against John Terry. We try to bully each other but no complaints,” he once told The Guardian in March 2007, reminiscing over his destruction of Jose Mourinho’s Chelsea in a 3-0 win for Middlesbrough in February the previous year. He also counted Rio Ferdinand among his numerous scalps, victimising the centre-half in Boro’s 4-1 victory over Manchester United in October 2005.

Yakubu departed the Premier League the only way he knew how: by scoring against a Terry-led Chelsea in May 2012. It was the last of his 95 goals in the top flight, making him the third-highest African goalscorer in Premier League history. Considering his clubs were Portsmouth, Middlesbrough, Everton and Blackburn, that is a remarkable feat.

9) Jay-Jay Okocha
For a player to use a major international tournament as a platform to earn a move elsewhere is nothing new. Karel Poborsky is the perfect example of a genre also featuring Patrik Berger, Theo Zagorakis and Salif Diao.

Never mind being so good he was named twice, Jay-Jay Okocha was so good he used the World Cup as a shop window on two separate occasions. Nigeria disappointed at the 1998 World Cup, but their star attraction entertained with his trademark tricks and phenomenal skills. Paris Saint-Germain took notice, and made him the most expensive African player in history at £10million that same summer.

Four years later, Okocha was it again, and although the destination was less appealing, the journey was more endearing. PSG were eager to offload the playmaker, then 28, and knew the 2002 World Cup was on the horizon. Nigeria again disappointed as they finished bottom of a group containing England, but Okocha would soon realise his Premier League dream.

He was not Bolton’s first foreign import, yet he is the player most synonymous with Sam Allardyce’s iconic Bolton side. Okocha was the heartbeat of that wonderful team, a phenomenon who combined obvious skill with underestimated grit and determination. For every stoppage-time rainbow flick over the head of a bemused Ray Parlour, there were those two sublime League Cup semi-final free-kicks as he captained the club to Wembley in 2004. He would be gone two years later, and while his love affair with England was brief, the memories are no less fond.

8) Riyad Mahrez
Of the 44 winners of the PFA Players’ Player of the Year award, 31 have been British or Irish. Eleven have been from elsewhere in Europe, while Luis Suarez is the sole South American recipient. Which illustrates just how brilliant its only African winner, Riyad Mahrez, can be.

These past few weeks may have seen the Algerian at his lowest, but no-one’s stock was higher in the 2015/16 season. Jamie Vardy scored the goals, N’Golo Kante had a choir of support championing his cause as the unsung hero and Wes Morgan and Robert Huth repelled pretty much anyone who dared approach Leicester’s penalty area, yet the Foxes were only ever at their devastating best when Mahrez was in full flow. Only four players scored more goals (17) and only four players registered more assists (11) in that campaign as Leicester were crowned the unlikeliest of champions.

7) Mohamed Salah
At first glance, the inclusion of Mohamed Salah on a list of the Premier League’s greatest ever African players is a prime example of recency bias. Emmanuel Eboue has been absolutely cheated when a striker with just 61 career appearances in the competition appears ahead of him.

Then you remember that he broke the record for the most goals in a single Premier League season, becoming the first African player to score 30 league goals in one campaign in England’s top flight.

It has been an absurd year or so for Salah, who has thoroughly banished all memories of his time at Chelsea. The Egyptian carried that burden of failure with him from Roma to Merseyside, and has slotted it into the corner with his left foot. Mo Salah? No problems.

6) Michael Essien
Although now remembered more for being one of many footballers immortalised with a ridiculous statue, or for continuing to call Jose Mourinho “daddy” despite the risky modern-day connotations, Michael Essien deserves a far greater reputation. Chelsea had won the Premier League title in the season before his arrival from Lyon, but the defensive tendencies of Claude Makelele and attacking propensity of Frank Lampard necessitated the addition of a tough-tackling ball-carrier to alleviate the pressure from both.

Essien was that man. One of only seven players signed by Mourinho for two different clubs, the Ghanaian married his all-action style with grace and poise, robbing you of possession with a rugged slide tackle before picking out an inch-perfect pass in his next movement. Dietmar Hamann will be the first to attest that his tackling style was never perfect, but it is impossible not to view his physics-defying strikes against Arsenal or Barcelona with mouth agape. For three years, there was arguably no better box-to-box midfielder in the Premier League.

Throwback to when Essien scored this screamer for Chelsea vs Arsenal 🚀

5) Nwankwo Kanu
He chased down a clearance by Albert Ferrer, and looked up to see Ed de Goey bearing down on him. Yet Nwankwo Kanu was not racing in on goal; he was alone, stranded by the left corner flag. In his own inimitable way, the Nigerian somehow clambered past the Chelsea goalkeeper, just barely keeping the ball in play, before curling a shot over the heads of Marcel Desailly and Frank Leboeuf and into the far corner from the most acute of angles.

In many ways, it was the ultimate Kanu strike. He was awkward yet elegant, driving with neither hand on the wheel but still maintaining full control, flailing limbs trying to keep up with his sharp mind. Then, in an instant, just when it looked as though the moment had passed, he conjures something quite remarkable to convert his hat-trick goal in a last-gasp comeback win.

“It’s Kanu – what’s he going to do? Oh, can you believe it? He’s flattened Chelsea!” were the immortal words Martin Tyler chose at the time, a line of commentary every Arsenal fan takes pride in being able to reel off at will. This was their cult hero’s finest moment in a hilariously large Gunners shirt.

Kanu started just 63 league games for Arsenal over six seasons, the victim of Thierry Henry’s emergence. He ranks below Sylvain Wiltord and Aaron Ramsey in terms of the club’s top Premier League scorers, and only six goals ahead of Nicklas Bendtner. Yet the smile, the famous two-fingered salute, the trophies and, of course, that goal, all add to the aura of a bona fide club legend.

4) Kolo Toure
Forget Luis Suarez’s tears, Steven Gerrard’s childhood dreams and Brendan Rodgers’ outstanding failure. The most painful aspect of Liverpool’s 2013/14 collapse was the fact that Kolo Toure was robbed of the chance to become the first man to win the Premier League title with three different clubs.

As the wide-eyed 20-year-old who first came to England with Arsenal in January 2002, little could be expected of Toure. As the story goes, the Ivorian spent much of his trial trying to impress by maiming first Thierry Henry then Dennis Bergkamp with sliding tackles, before completing the hat-trick by clattering into Arsene Wenger.

“We’re signing him tomorrow. I like his desire,” was the supposed response from Wenger in the treatment room, and the Frenchman would not regret the decision. Toure played as important a part as anyone in the Invincibles season, missing just one Premier League game that campaign, before adding another title to his collection with Manchester City. And now the chant is in your head.

Adebayor’s rap sheet is notorious, and includes charges of laziness, greediness and impetuousness. All of which masks a Premier League career spanning ten years, 97 goals and, rather unfathomably, no trophies. The second-highest African goalscorer in English top-flight history might do himself no favours, but he deserves more than a Tim Sherwood salute to show for his efforts.

2) Yaya Toure
When it comes to reminiscing over the greatest individual seasons in Premier League history, the candidates are obvious: Alan Shearer in 1994/95; Thierry Henry in 2003/04; Cristiano Ronaldo and Nemanja Vidic in 2007/08; Luis Suarez in 2013/14.

Kevin de Bruyne has made a habit of running games from the Manchester City midfield this season; Yaya Toure was doing it before it was cool. His absolute dominance in their second Premier League title win is so often unfairly overlooked. He was the driving force, an unstoppable machine that swept aside each and every opponent with consummate ease. His languid style invited accusations of laziness, but Toure at his peak was more effortless than he was lacking effort. The 2013/14 season saw him become only the second midfielder to ever score 20 goals in a single campaign, and it was also the only season since Sergio Aguero joined that he has not been City’s top league scorer.

Toure has played a key role in each of the six trophies City have won since 1976. He scored the winner in the 2011 FA Cup final, was named in the Premier League 2011/12 PFA Team of the Year, was man of the match in the 2012 Community Shield, scored a remarkable goal in the 2014 Capital One Cup final, scored the winning penalty in the same tournament two years later, and altered the boundaries of goalscoring midfielder in that fabled title-winning season. The light has noticeably dimmed since, but it was breathtaking at its absolute brightest.

Yaya Toure played DM in arguably the greatest club side in recent history, played CB in a victorious UCL final then went to England & played as a box-to-box CM & AM scoring 20 PL goals in one season. What a player he has been.

1) Didier Drogba
It could only be him. Didier Drogba remains the benchmark, the yardstick, the gold standard of African footballers not only in the Premier League, but throughout the world. He is the Premier League’s top-scoring African, the Champions League’s top-scoring African, and the very definition of a ‘big-game player’. He scored ten goals in ten finals at Stamford Bridge, adding to his four domestic titles.

Carles Puyol, Nemanja Vidic and Pablo Zabaleta are all among the countless defenders to name Drogba as their most difficult opponent, while he ranked third behind ‘passing’ and ‘defending’ for Chris Smalling. Jamie Carragher described him as “unplayable” in 2015, and “a very close second” to Thierry Henry for best Premier League striker ever. He just a target man; he was the target man, redefining the very term in his own unique way.

“Do not judge him now. Judge him when he leaves the club,” said Jose Mourinho upon signing the Ivorian in 2004. That he is now the barometer against which every other striker, regardless of nationality, is judged, tells its own story.