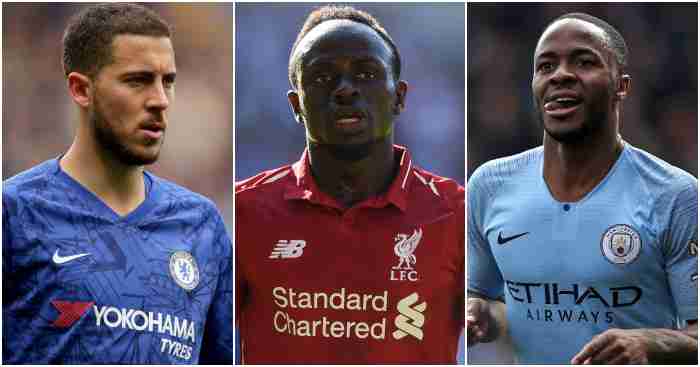 10) David Brooks
“When I arrived at the club, not many people would have anticipated the start I have made – myself included,” admitted Brooks after signing a new deal less than a season after joining Bournemouth from Sheffield United. It was reward for a stunning ascent, from Manchester City reject to Premier League and international regular, via the National League and Football League.

Seven goals and five assists have been a tangible sign of the quality and drive the 21-year-old has brought to Bournemouth’s midfield. Ryan Giggs reckons Brooks would have been in the England squad had he, y’know, not been Welsh, and further recognition came in the form of a nomination for the PFA Young Player of the Year award alongside Raheem Sterling, Bernardo Silva, Marcus Rashford, Trent Alexander-Arnold and Declan Rice, all of whom would fetch at least £50million on the market. How much profit would Bournemouth make now on the £10million they paid for Brooks last summer?

Suggestion for PFA Young Player of the Year. Add games qualifier too.

Silly that Raheem Sterling (215 league games) and Bernardo Silva (205) on the list.

9) Gylfi Sigurdsson
It has been an indifferent season for Everton but Sigurdsson has stepped it up a level in his second year at Goodison Park, playing a part in every Premier League game so far; only Jordan Pickford has accumulated more minutes for the Toffees. With 13 goals, the Iceland star is Marco Silva’s joint-top scorer while offering more assists than any of his team-mates.

If Everton had the top-class centre-forward they have lacked for too long, perhaps Sigurdsson would have helped them get closer to the big six. Only five players in the Premier League have created more chances, with Sigurdsson keeping pace with Spurs’ assister-in-chief Christian Eriksen.

No player has scored more Premier League goals from outside the box since 2016/17 than Gylfi Sigurdsson (10).

Two of them have come against Man Utd. ☄ pic.twitter.com/bYag60ec9u

8) Diogo Jota
You can’t move at Molineux without bumping into a Wolves Player of the Season candidate. Joao Moutinho featured in our central midfielders of the season and, just ahead of him, Jota’s form in 2019 would make him another strong candidate to take the old gold gong.

Wolves’ record against the top six has been quite remarkable – in a mini-league between the seven teams, Nuno’s side would be third only behind City and Liverpool – and Jota has been a huge factor in their success in unsettling the big boys. He carries Wolves up the pitch, and upon getting there, Jota has contributed nine goals and five assists.

Nuno should take some credit for the former Atletico Madrid player’s improvement. On the left of a front three, Jota initially struggled to adapt to the Premier League. But after moving to play off Raul Jimenez, he hasn’t looked back.

Diogo Jota has been directly involved in nine goals in his last ten games for Wolves across all competitions:

Having a great campaign. 🐺 pic.twitter.com/Whbt2AWbZH

In terms of creating chances in the league this season, there is some truth in that statement at least. Only two players across Europe’s top five leagues have laid on more opportunities for team-mates: Lyon’s Memphis Depay and Atalanta’s Alejandro Gomez. Not even Eden Hazard can match him in the Premier League.

That is quite an achievement for a young player embarking upon his maiden season in the top flight. Indeed, Gary Neville likened his style to Hazard himself: “They play football like it should be played as a kid where it’s just really enjoyable.”

Same again next season and you watch the big boys queue up.

6) Ryan Fraser
It seems a little pep talk from Eddie Howe last summer provoked the Bournemouth winger into the best season of his career. “He said my mindset had to change because if I didn’t, he would pick someone else over me,” Fraser said last September.

Since then, the Premier League’s smallest player has become the most prolific creator of big chances – by some considerable distance. Fraser has laid on 28, the next best is Eden Hazard on 18. Fraser is also the player closest to the Chelsea star seemingly bound for Real Madrid by contributing 14 assists – the Belgian has just one more. So it is little wonder that the top six clubs are looking at the Scotland winger, with Arsenal said to be most interested.

5) Son-Heung Min
The season is threatening to end on a sour note for Son following his suspension-enforced absence from the Champions League semi-final first leg and the first-half red card at Bournemouth which brought a premature conclusion to his Premier League campaign. But prior to some uncharacteristic ill-discipline, Son has been pivotal to Spurs.

The South Korean star’s season really got going after Mauricio Pochettino held him back from international duty in November. Prior to that, Son admits he “didn’t feel great”. After taking the chance to reset, Son scored his first 11 Premier League goals of the season in just 15 appearances, with three goals in three games in Harry Kane’s absence in January and February particularly important.

The goals have dried up in the Premier League of late but three in the Champions League double-header against Manchester City put Spurs in the semi-finals. The expectation around his return for the second leg at Ajax highlights just how important he has become to Pochettino.

4) Mo Salah
The Liverpool star headed this list last season so despite the debate over whether the role he plays for Jurgen Klopp validates his inclusion, it is only fair he be given the chance to defend his crown.

Salah has certainly done his bit to retain top spot and to aid Liverpool’s title chances. With 22 goals, two more than Sergio Aguero, Pierre-Emerick Aubameyang and Sadio Mane, the reigning Golden Boot winner is on course to retain his status as the Premier League’s deadliest hitman. Which is all the more impressive when you consider that, during the opening weeks of the season, many were speculating about why Salah wasn’t looking as sharp as last term.

That man Mo! 🇪🇬👑@MoSalah has been named the @PFA Fans' Player of the Month for April 👏#PFAFansAward pic.twitter.com/zs2btKOTTs

3) Sadio Mane
The Senegal star has picked up some of Roberto Firmino’s slack this season, with one more Mane strike meaning Liverpool will – for the first time ever – have helped two players to 25 or more goals in consecutive seasons.

Despite Salah again establishing himself as top scorer – just – Mane has taken his turn to carry the burden of responsibility, with the 27-year-old scoring 11 goals in 11 matches between January and March to keep Liverpool on track in both the Premier League and the Champions League. His 20-goal haul has also been gathered without the aid of penalties. Discounting spot-kicks, Mane would be the league’s top scorer.

It’s no wonder Zidane’s a fan.

Three African players have scored 20+ goals in a single Premier League season for the first time:

Auba joins from the spot. pic.twitter.com/lObKM4ytrJ

2) Eden Hazard
No attacker has been more important to their team this season. With 16 goals and 15 assists, the Belgian has had a direct hand in 49.2 per cent of Chelsea’s total haul.

If Chelsea had a fit-for-purpose centre-forward, that proportion would be even greater. If he could get on the end of his own passes, Maurizio Sarri would have had a Champions League place tied up weeks ago. How they will replace Hazard next season, God only knows.

1) Raheem Sterling
“Last season I said to myself ‘I want to score 15 in the league’ then went on to score 18. This season I’ve gone back and said ‘I need to do better than last season’.” Sterling is making a bloody good fist of it; with two games to go, he is just one goal and one assist from last term’s tally.

Those achievements and the rather less tangible progress Sterling has made as one of Pep Guardiola’s leaders was enough for the Football Writers’ Association to make him their Footballer of the Year. Had it not been for Virgil van Dijk’s supreme first full season at Liverpool, Sterling would have taken the PFA award too. Aged 24, he had to settle for the Young Player of the Year gong instead. Don’t get us started on that one.

Achieving all that while sticking it to the racists – we bloody love him.