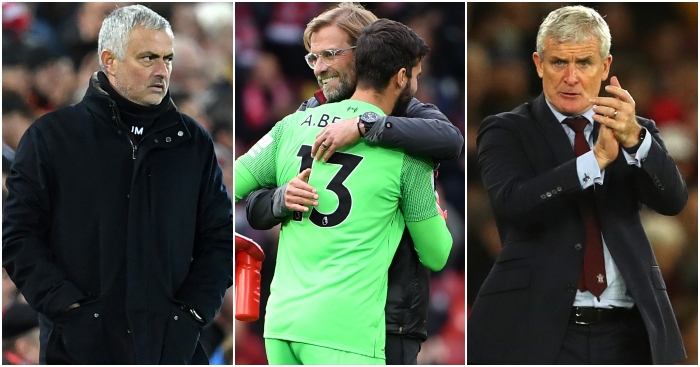 10) Wolves signing Joao Moutinho
The Portugal star took his sweet time getting to the Premier League and the fear was that he would be too slow once he arrived. But the 32-year-old, signed from Monaco for £5million, has been nothing short of brilliant for Wolves.

Few doubted his creative talents and the fact that he has laid on more chances than any Wolves team-mate – and more than Paul Pogba and Christian Eriksen – suggests those instincts remain as sharp as ever. But he has also made more successful tackles than any team-mate, while no player in the Premier League has attempted as many (though none have been dribbled past more often).

Moutinho, a Euro 2016 winner, has set the tone for Nuno Espirito Santo and led by example. It was thought he had missed his Premier League chance when a Tottenham move fell through in 2012. Six-and-a-half years on, he would still be a huge asset to Spurs – a point he rammed home at Wembley last month.

Good. VAR obviously splits opinion – for what little it is worth, I agree with Johnny Nic – but it seems many were won over in the summer. As long as we can decipher that Harry Kane was offside by a cat’s c*ck hair, then to hell with the spirit and the chaos of football that turns many people on to this wonderful sport.

La Liga introduced VAR in time for this season and it’s caused little less controversy than before. It is coming to the Premier League – even us sceptics accept that it is inevitable – but there are plenty of flaws in the system which still need to be corrected; the longer we can milk its absence, the better.

8) Cardiff sticking a right-back up front
Having failed to sign the necessary attacking reinforcements during the summer, Cardiff are recruiting a couple of strikers in January. But Neil Warnock has had to make do and mend during a first half of the season that has been an embarrassment to the centre-forwards already on the Bluebirds’ books.

Between them, Gary Madine, Kenneth Zohore and Danny Ward have combined for a single Premier League goal this season. Injuries have played a big part, but Warnock has had no choice but to look elsewhere.

Given he looks like a young Sam Allardyce, it’s little surprise that Callum Paterson caught the manager’s eye. The 24-year-old arrived at Cardiff last year from Hearts as a right-back but he also played in midfield during their promotion campaign. Paterson has been shunted even further forward this season, primarily because of his physical presence and his willingness to run, but he has also chucked in four goals, three of which have been vital contributions in Cardiff’s five wins so far.

Didier Drogba and Diego Costa offer Gonzalo Higuain rather more inspiration, but Morata – with his game face like a permanently slapped arse – couldn’t take it. Olivier Giroud, effective in every aspect except his primary role, has his uses but goalscoring sadly is not one of them.

Sarri tried to muddle though to January but with Eden Hazard able to play as a false nine, at least he had an alternative of sorts. But the Blues and Hazard are better when someone else can take the slack through the middle. See Arsenal 2-0 Chelsea for proof.

6) Man City moving Bernardo Silva back to play as a deep-lying midfielder
“Today the performance from Bernardo Silva was a masterpiece,” said Pep Guardiola after the Community Shield win over Chelsea and the Portuguese produced several similarly awe-inspiring pieces of work since. The best of all: his interpretation of a holding midfielder in the crucial win over Liverpool.

Silva, a diminutive talent with creative flair, was positioned alongside Fernandinho and didn’t stop all night. He broke his own record by running 13.7km as the Reds failed to shrug him off. It wasn’t the first time he did a job against Jurgen Klopp’s men – Guardiola employed Silva in a similar role when Liverpool were shackled and shut out at Anfield in October.

Guardiola has made little secret of his desire to recruit another holding midfielder, especially with Fernandinho and the future in mind. But in the short term, until the right player becomes obtainable, Silva can sit while City can cope without him further forward.

5) West Ham moving Declan Rice up to play as a deep-lying midfielder
One of the possible solutions to Guardiola’s midfield problem is Rice. Which is interesting given he’s not a holding midfielder either.

But the West Ham youngster has done a very passable impression of one, especially for a player who turned 20 only last week. Rice emerged with the Hammers as a centre-back last season but new boss Manuel Pellegrini signed Issa Diop and Fabian Balbuena to reinforce his rearguard. He also recruited Jack Wilshere but, sadly inevitably, the former England midfielder has barely been seen since the fourth game of the season.

Wilshere’s absence gave Rice a midfield opportunity which he has seized with both hands. It is perhaps no coincidence that West Ham’s miserable start ended when the youngster came into the side alongside Mark Noble. Rumours of interest from City haven’t subsided, despite Rice penning a new long-term contract with the Hammers.

Declan Rice is one of the best ball winning midfielders in the Premier League. He’s 19-years-old. Hand him a debut for the national team. He’s already much better than Henderson. Magnificent talent.

4) Watford selling Richarlison
The deal that took Richarlison from Watford to Everton in the summer appeared to suit all parties. Half a season on, Watford might claim they got the better end of it.

The Toffees paid £40million to fill a gaping hole in their forward line, while the Brazil attacker took his next step on the career ladder. For their part, Watford were able to make a profit in the region of £30million on a player who spent 12 months on their books.

And they haven’t missed him. His season at Vicarage Road was one of two halves: the first was electric and formed the basis of Everton and Watford’s valuation. The second saw the then-21-year-old’s form drop off a cliff while his confidence disintegrated. That doesn’t mean he wasn’t worth the investment – Everton recognised they were paying for potential as well as immediate impact and with nine goals, he has made a positive difference at Goodison Park. But under Javi Gracia – who never saw Richarlison play a role in any goal after being appointed last January – Watford haven’t looked back. They are four places and three points ahead of Everton.

3) Southampton sacking Mark Hughes
Saints can’t claim too much credit for ending Hughes’ reign before it was too late, given it was them who gave the manager a barely deserved three-year contract in the summer after they escaped relegation on the basis of not being quite as wretched as Stoke, West Brom or Swansea.

Unsurprisingly, Southampton were back in the bottom three under the stewardship of Hughes who, for a manager who claims he doesn’t do relegation, has spent as awful lot of time around the drop zone over the last 18 months. Since replacing him with Ralph Hassenhuttl, Saints have earned more points since his arrival than every other club in the Premier League bar five.

“The difference has been unbelievable,” said James Ward-Prowse earlier this month, before continuing his unintentionally damning assessment of what went before: “We have a clear structure and a plan of what to do with and without the ball.”

2) Liverpool spending big on a goalkeeper
If Jurgen Klopp hadn’t already decided that he was going to blow the budget on a goalkeeper this summer, then last season’s Champions League final would certainly have focused his mind. Virgil van Dijk is good, but even he can’t cover for a keeper that is little more use than a traffic cone.

Of course, recognising the need for a new No.1 is the easy part. Identifying the suitable candidate is a little more tricky. No longer is goalkeeping recruitment about finding the fella who can best keep the ball out of the back of the net; some coaches want their custodian to defend and attack.

The brains at Anfield picked Alisson as their primary candidate and they didn’t f*ck about in making sure they got him. Chelsea and Real Madrid were just two of the clubs looking at the Roma stopper but Liverpool were decisive. The Brazilian hasn’t been brilliant – he hasn’t had to be – but the contrast between his standards and those of his predecessors have made the 26-year-old appear the reincarnation of Lev Yashin.

After the defeat at Liverpool, a miserable Sunday afternoon spent chasing the shadows of their bitterest rivals while arguably their best player watched non-plussed from the bench, the best United fans could hope for from the rest of the season is that things wouldn’t get much worse. A month and six straight Premier League wins later, United are on the up again, everyone at Old Trafford has a smile on their face, and Mourinho looks a bit daft.

It always seemed a case of when whether than if Mourinho would leave United, but the presumption was that Woodward would force the club and its ex-manager to co-exist miserably together until the summer. The Red Devils appear to have acted just in the nick of time to avoid having to write off their season altogether.