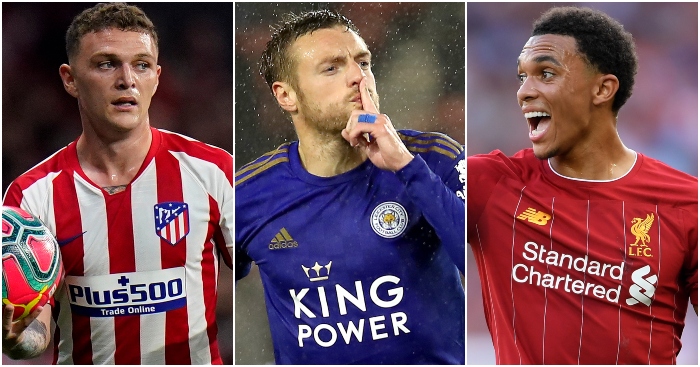 10) Tyrone Mings (Aston Villa)
There is always something going on around Mings. For the most part this season, the Villa defender has caught the eye with some highly commendable performances which led to an England debut last month. Indeed, the 26-year-old looks set to retain his place alongside Harry Maguire for the Three Lions’ next fixtures next week.

But that is not to say that Mings has been flawless at the heart of Villa’s defence. Opta say no player has made more errors that have led to opposition shots, while the naked eye suggests Mings could have done more to prevent four goals conceded by Villa so far this term. It is clear, though, that if Mings can cut out the mistakes – and quick, since he’s hardly a rookie – then Gareth Southgate will have a solution to one of his biggest problems.

9) Ben Chilwell (Leicester)
It’s a mystery why the Leicester defender hasn’t yet been given an extended run in the England side. Southgate likes Danny Rose and you cannot fault the Three Lions’ boss for his loyalty. But Rose’s form and the spectacular contrast to Chilwell’s performances can no longer be ignored.

Chilwell is almost freakishly unflappable on the left of Brendan Rodgers’ back four. Defensively, he looks flawless, with all the pace, positional awareness and timing in the tackle that a top-class full-back needs. And for his average height, he is surprisingly strong in the air.

Perhaps there is room for improvement going forward. But Chilwell has matched Alexander-Arnold’s assists and goals tally so far this term and only four other defenders have created more chances in open play. Southgate need not look elsewhere for an England left-back.

8) Raheem Sterling (Manchester City)
Sterling is just doing Sterling stuff now. So consistent has he become that we are all in danger of being complacent about his impact. Indeed, the debate of late has been whether the England star can reach the levels of Cristiano Ronaldo and Lionel Messi.

He perhaps won’t achieve those highest of heights, but that should never be held against any player. Instead, just appreciate Sterling for what he is: a devastatingly consistent attacker who has smoothed the rough edges around his game to become one of the game’s most in-demand players. But if Real Madrid are serious, they will have to do better than this.

7) Jadon Sancho (Borussia Dortmund)
Starting what even Borussia Dortmund expect to be Sancho’s last season in the Bundesliga, the England winger has begun in similar form to last season. No player in the league has more assists than the six Sancho has notched while also chipping in with three himself. Only Robert Lewandowski and Timo Werner have been directly involved in more Bundesliga goals this term, though Sancho has made two fewer appearances.

The 19-year-old is likely to have his pick of Premier League clubs next summer, though an eye-catching Euro 2020 could also attract interest from elsewhere on the continent. But it seems most likely that Sancho will be coming home. He remains Ole Gunnar Solskjaer’s dream signing, but if United remain bogged down in mid-table, the United boss should probably dream on.

6) Chris Smalling (Roma)
The former England defender was probably Manchester United’s third-choice centre-back in the summer but since nobody was willing to take Marcos Rojo, Eric Bailly or Phil Jones off their hands, the Red Devils had little choice but to accept Roma’s loan offer for Smalling.

For Roma and Smalling, it has turned out to be an inspired move. The 29-year-old has been in hugely impressive form during his start to life in Serie A; so much so that Roma have already decided they want him for keeps. Smalling’s performances have been reminiscent of those he gave for Louis van Gaal, when the centre-back was in the form of his life. In a side expected to attack, like United and England, Smalling might not excel. But if you’re looking for a defender to defend, then you won’t find many better with an English passport.

Chris Smalling vs De Ligt in Serie A this season 👀 pic.twitter.com/nMpd6pomaT

5) John Lundstram (Sheffield United)
“I said to him last season, if we do manage to go up then don’t think ‘that’s me done!’” said Chris Wilder of Lundstram back in August. “I always thought he had a part to play.”

He didn’t last season. Lundstram was given only five starts for Sheffield United during their promotion campaign in the Championship and it was assumed the 25-year-old would be off during the summer in search of his 10th professional club. But instead the midfielder has been an ever-present in Wilder’s engine room, helping himself to three goals in his first 11 games in the top flight.

That’s not to say that Lundstram has proved Everton wrong, because the Liverpool-born England Under-20 international now accepts that he might not have been ready to seize his opportunity had the Toffees given him one before allowing him to join Oxford in League Two. Four years later, Lundstram is the driving force in a Blades side currently in the Premier League’s European places.

4) Trent Alexander-Arnold (Liverpool)
“He plays as a playmaker on the right,” said Liverpool assistant boss Pep Lijnders of Alexander-Arnold before the 21-year-old made his 100th appearance for the Reds during the mentality monsters’ 2-1 win at Villa on Saturday. The stats back up Pep’s talk.

Alexander-Arnold has the same number of assists as Mo Salah and Roberto Firmino so far this season but more impressively, the right-back has matched Kevin De Bruyne for chances created this term. On 40, Alexander-Arnold is 15 ahead of Jack Grealish, the next most creative English player. Set-plays account for 18 of those chances created – five more than anyone else in the league – while in open play, the Liverpool defender has teed-up team-mates just as often as Raheem Sterling.

The best two minutes and forty-two seconds of your day pic.twitter.com/tZQENYBZyx

3) Tammy Abraham (Chelsea)
Own up, who didn’t think Abraham would be able to cut it as Chelsea’s first-choice centre-forward. *sheepishly raises hand…

Frank Lampard insists the England forward was always going to get his chance this season regardless of Chelsea’s transfer ban. We’ll never know how sincere Lampard’s words were, but failing to buy a striker – had he been able to do so – would have been seen as negligent in the extreme.

It is hardly Abraham’s fault that his opportunity came by default, but so far he has seized his chance with both hands by sitting in joint-second place in the race for the Premier League Golden Boot. Having defied those among us who doubted his ability at the highest level, Abraham will have us all gorging on humble pie if he keeps up this kind of pace.

2) Kieran Trippier (Atletico Madrid)
No one questioned Tottenham’s decision to sell Trippier after what the right-back admitted had been a ‘car crash’ of a season. The only gripes Spurs fans had centred on their failure to buy a replacement.

Regardless of that and the £20million they made, Trippier has been Spurs’ loss and very much Atletico’s gain. After being ruthlessly cut adrift by Mauricio Pochettino, Trippier has helped Atletico maintain the best defensive record in La Liga and his devilish delivery from the right has been compared to that of David Beckham.

The 29-year-old went from being the best right-back at the World Cup to not even in England’s squad a year later following a season in which he looked mentally and physically shot. But moving to Atletico and working under Diego Simeone has rejuvenated Trippier to such an extent that he was back in Southgate’s starting XI during the last international break.

The answer to the question is of course a striker no longer available to England. Which is a shame because this Vardy is different to the one who walked away form the international scene. Where Vardy used to hunt his own prey, he now only feasts on whatever his team-mates provide for their centre-forward. No striker with at least five goals has played more minutes this season but none has touched the ball fewer times than Vardy. Sergio Aguero is the next least-active forward and he’s had 40 more touches than the Leicester star in 326 fewer minutes.

With so many goals from such little involvement, it goes without saying that Vardy is operating at a higher efficiency rate than anyone else. The 32-year-old has dispatched 48 per cent of his opportunities, which is frankly ridiculous. If Vardy can maintain such ruthlessness and Leicester can continue to tee him up, Leicester really are in business.

Since Rodgers' first #PL game in charge of Leicester, Vardy has scored 19 league goals – five more than any other player.#MOTD2 pic.twitter.com/0VRFavotdn