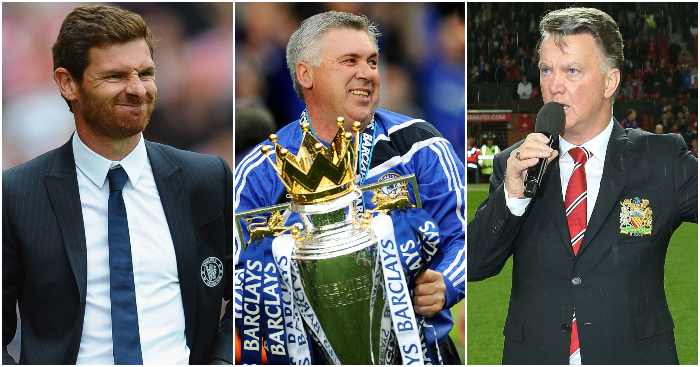 10) Nuno – 38 matches, 1.5 points per game
After guiding newly promoted Wolves to become the highest-placed finishers underneath the Big Six, you might think Nuno would feature more prominently on Chelsea’s radar. After all, the former goalkeeper has experience of managing big clubs – Porto and Valencia – while also having coached in the Champions League.

But Chelsea seem destined to go down a different road – and that suits Wolves just fine. Nuno too, because the project at Molineux seems a long way from being finished. The 45-year-old has already been at this post longer than any of his other managerial stints but another season at Wolves – even with only slight progress – would put him firmly in the frame for bigger jobs next summer.

9) Bruce Rioch – 63 matches, 1.66 points per game
The former Torquay, Middlesbrough, Millwall and Bolton manager squeezed a lot into his year in charge of Arsenal. His reign, sandwiched between George Graham and Arsene Wenger, started positively with the signings of David Platt and Dennis Bergkamp but barely a few months into the season, Rioch shifted Ian Wright to the left wing before then dropping him, leading to Arsenal’s greatest goalscorer whacking in a transfer request.

Fortunately for Wright, Rioch went first. His season in charge ended in a fifth-place finish and a League Cup semi-final defeat. The Arsenal hierarchy weren’t too perturbed by what many saw as underachievement but Rioch calling out the board over their transfer inactivity went down like a cup of steaming-hot piss.

The one player they signed? Back-up keeper John Lukic. And Unai Emery thinks he’s got problems…

8) Gianluca Vialli – 86 matches, 1.77 points per game
Chelsea loved a player-manager in 1990s. After Glenn Hoddle it was Ruud Gullit, then in February 1998 came Vialli. The 33-year-old Italian relished replacing the Dutchman, who departed having made a decent fist of his first managerial appointment, winning the FA Cup in his maiden campaign as boss before leaving the Blues in second place in the Premiership.

But Vialli’s relationship with Gullit had long since gone south. The first Italian to manage in the top flight inherited a side already in the League Cup semi-finals and European Cup Winners’ Cup quarter-finals. Chelsea won both under Vialli, who guided the Blues to third in the league – their highest league finish since 1970 and just four points behind champions Manchester United – in his first full season in charge.

Another FA Cup followed the following season but after two-and-a-half years in charge, Vialli was sacked five games into 2000-01 on the back of an indifferent start, having reportedly fallen out with key players such including Gianfranco Zola, Frank Leboeuf and Albert Ferrer. How does anyone fall out with Gianfranco Zola?

7) Louis van Gaal – 76 matches, 1.789 points per game
The Dutchman was brilliant fun at Manchester United. It’s such a shame his brand of football was so eye-bleedingly dull.

The only time we saw his personality on the touchline was his comedy fall at Arsene Wenger’s feet in 2016. For the rest of his two years at Old Trafford, he sat lifeless on the bench while Ryan Giggs shuffled further away as United fans grew more bored with each passing week of sterile, dull football. The overwhelming consensus even after winning the FA Cup was that his time was up but Ed Woodward still managed to make a pig’s ear of his dismissal.

6) Andre Villas-Boas – 81 matches, 1.79 points per game
The way his stints at Chelsea and Tottenham panned out make it too easy to forget what Villas-Boas achieved at Porto. During his only campaign in charge, the then-32-year-old won the domestic Double, clinching the title by more than 20 points after only the second-ever undefeated season in Portuguese football. Villas-Boas also broke Vialli’s record, which had stood for 13 years, as the youngest coach to win a UEFA competition when Porto won the Europa League. Remarkable stuff.

Not that any of those achievements or his tactics impressed a Chelsea dressing room which had recently seen off Carlo Ancelotti. In his eight-month reign, Villas-Boas won 48% of his matches, the lowest win percentage of all Roman Abramovich’s managers barring Guus Hiddink’s second spell in caretaker charge.

Villas-Boas lasted longer at Spurs and won 53% of his Premier League games at White Hart Lane but the manager was mutually consented halfway through his second season after a 6-0 defeat at Man City and a 5-0 home thrashing at the hands of Liverpool.

5) Unai Emery – 38 matches, 1.84 points per game
The Arsenal manager is just over a third of the way to getting himself off this list. Whether he will be given the chance to stick around for long enough to complete that task is anyone’s guess.

If there is any doubt over whether Emery will get to 100 games at Arsenal, it stems more from the club and the state it has got itself into rather than whatever the Spanish manager has or hasn’t done. Granted, winning the Europa League – one thing we know Emery can do – would have made his job as project manager for Arsenal’s rebuild rather easier, but the thrashing at the hands of Chelsea leaves the Gunners boss with a moderate budget to satisfy premium expectations.

Good luck with that…

4) Maurizio Sarri – 38 matches, 1.89 points per game
Chelsea fans didn’t like his football and the club didn’t much appreciate his chain-smoking habit. But no one can argue with Sarri’s timing.

He left Stamford Bridge at the weekend with his reputation enhanced after a delivering a top-three finish and a European trophy, just before trying to better that without his best player or the opportunity to buy any replacements. Presumably he put down the Benson and Hedges and sparked up a fat Cuban upon hearing of Juventus’s offer…

3) Guus Hiddink – 34 matches, 1.94 points per game
Roman’s favourite firefighter has both the best and worst record of any of the Chelsea owner’s 13 different managerial appointments.

His first spell, taking the reins from Luiz Fillipe Scolari, saw Hiddink rejuvenate Chelsea, guiding them to 11 wins out of their remaining 13 Premier League fixtures in 2008-09 while also lifting the FA Cup. Had it not been for Tom Henning Ovrebo, the Dutchman might have been the first Chelsea manager to win the Champions League three years before another caretaker boss pulled it off.

Hiddink’s second spell was a rather tougher gig after taking over a group which were the reigning Premier League champions yet languishing in 16th place having downed tools on Jose Mourinho’s watch. Because he wasn’t Mourinho, Hiddink was able to inspire an undefeated run of 15 matches to at least drag the Blues’ shirkers into the top half of the table before Antonio Conte got his hands on them.

2) Carlo Ancelotti – 76 matches, 2.07 points per game
Has any manager ever been judged as harshly as Ancelotti? The Italian spent two seasons in England, winning the domestic Double in his first campaign before being sacked within an hour of the end of his second term in 2011 after Chelsea finished a miserable… *checks notes*… second place.

“This season’s performances have fallen short of expectations and the club feels the time is right to make this change,” explained the Chelsea’s statement. They were drafting another the following February, by which time Villas-Boas had shown the Blues to be careful what they wished for.

1) Antonio Conte – 76 matches, 2.14 points per game
Sarri made his sharp exit presumably after noting how Chelsea are seemingly incapable of building on success. His predecessor learned the hard way, winning the title in his first season but spending his second campaign at loggerheads with his players and board before finishing outside the top four. The Italian won the FA Cup, but that is no longer enough to quench Abramovich’s thirst.

So Conte and Abramovich engaged in a summer-long stand-off with each waiting for the other to blink. Conte waited for the bullet and the subsequent pay-off, while Abramovich held fire in the hope another club would take the coach while saving him around £9million in compensation. When Conte showed up for pre-season training while Sarri was waiting to be confirmed, the owner had no choice but to pull the trigger.

This summer, at least, Juventus have saved Abramovich the bother. Now Conte has them in his sights.