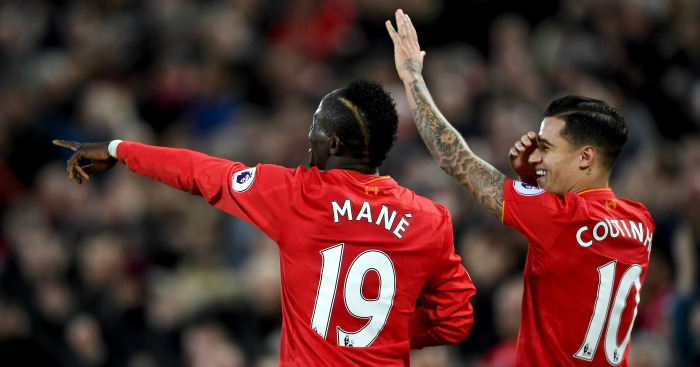 10. Romelu Lukaku and Yannick Bolasie
Anthony Martial has a lot to answer for. It was back in December that the Frenchman inflicted upon Yannick Bolasie an injury that left the winger tending to his wounds on the sidelines. It was a devastating setback for the club-record signing.

Bolasie had struck up quite the partnership with the man he replaced as Everton’s most expensive player. His four assists in the first half of the campaign all resulted in Romelu Lukaku goals, while the striker returned the favour for Bolasie’s only Toffees strike to date against Burnley in October. Even three months into the winger’s absence, no two players on any other Premier League side have combined more often to score. The pair stood as proof that the Toffees had improved immeasurably going forward.

“We speak Lingala on the pitch,” was the Congo international’s explanation in November. “There aren’t too many defenders in the league who speak it, so that gives us a little bit of an advantage.” You can see why Phil Jones might have struggled.

9. Craig Dawson and Gareth McAuley
To change your playing position is no easy task. To do so mid-season, having been a regular starter in a previous role, is an almost impossible transition to master. But Craig Dawson had Gareth McAuley on hand to walk him through it.

Dawson started the season as West Brom’s right-back, but centre-half fetishist Tony Pulis wanted more. An injury to Jonny Evans forced the manager’s hand, and Dawson was the beneficiary of the situation. He started four games at centre-half in January and at the start of February; West Brom went unbeaten in that sequence.

Twenty-six-year-old Dawson had impressed, but 37-year-old McAuley played a crucial role. The pair formed the right-hand side of West Brom’s defence for the majority of the season, but necessity is the mother of invention, and the grandfather of the Baggies squad confirmed his status as one of Europe’s unlikely leading elder statesmen by guiding this adjustment. And yet some people still can’t tell the difference between them.

When Gareth McAuley makes the BBC's Team of the Week, yet they print a picture of Craig Dawson ? #wba pic.twitter.com/hZgqiJoKyJ

8. Ryan Bertrand and Nathan Redmond
“We’re building a strong relationship and it’s showing,” said Nathan Redmond of his burgeoning partnership with Ryan Bertrand last week. The former had just struck two goals in the 4-3 victory over Watford; the latter had afforded him the freedom to do so.

“He’s always in my ear if I do something good or bad,” Redmond added of his left-sided compatriot. “To have someone strong like Ryan behind me is a good feeling and you know defensively you have a little bit less to do.”

If any manager would attempt to capture the unique club magic Claude Puel has fostered at Southampton in an international bottle labelled ‘Make England Great Again’, it is Gareth Southgate.

7. Laurent Koscielny and Shkodran Mustafi
There was a time when Shkodran Mustafi was Arsenal’s lucky charm, the antidote to their seasonal fatal collapses. It was not by chance that the end of Arsenal’s 12-game unbeaten Premier League run coincided with his injury. The back-to-back defeats to Everton and Manchester City came during Mustafi’s time on the sidelines with a hamstring injury.

His personal unbeaten run was finally halted by Watford in January, and ended at an impressive 15 games. Indeed, that was the first of three defeats Arsenal have suffered in their last four Premier League fixtures. But such a dire run of form should not detract from the improvements Mustafi has brought about in defence. They do, or at least they did, look much stronger.

If you remain unconvinced, consider this: Per Mertesacker started 94 Premier League games in the last three seasons, in which time Gabriel, Nacho Monreal, Calum Chambers, Mathieu Debuchy and Bacary Sagna started a combined 37 league games between them at centre-half. Mustafi might not be the cure for every Arsenal problem, but he is the long-term partner to Laurent Koscielny that has long been required.

6. Toby Alderweireld and Jan Vertonghen
Manchester United, Newcastle, Leicester, Southampton. So ends the extensive and eclectic list of teams that have defeated Tottenham when their current first-choice centre-half pairing has started in the Premier League. Since Toby Alderweireld joined countryman Jan Vertongen at White Hart Lane in summer 2015, Mauricio Pochettino has proudly boasted the finest defence in the land.

‘”Don’t believe what people say. Barça didn’t do tiki-taka! It’s completely made up! Don’t believe a word of it! In all team sports, the secret is to overload one side of the pitch so that the opponent must tilt its own defence to cope. You overload on one side and draw them in so that they leave the other side weak.

‘”And when we’ve done all that, we attack and score from the other side. That’s why you have to pass the ball, but only if you’re doing it with a clear intention. It’s only to overload the opponent, to draw them in and then to hit them with the sucker punch.”‘

When one lightning quick 20-something “tilts” the defence, another takes advantage, and vice versa. It is simplicity at its most sublime, and yet its most effective. Of the eight Premier League games Sane and Sterling have started together, City remain unbeaten.

4. Zlatan Ibrahimovic and Paul Pogba
The accepted wisdom upon Zlatan Ibrahimovic’s arrival at Old Trafford was that the Swede could be the perfect role model for Marcus Rashford. The young striker could not hope for a better teacher from which to learn the nuances of the game, and how to lead the line as a central striker for an elite club.

Perhaps we all overlooked a more pertinent point. Ibrahimovic is as much a template for Rashford and others to improve their game as he is for Paul Pogba to adopt more responsibility in future. The Swede is Jose Mourinho in excelsis, the manager’s on-pitch lieutenant. In that sense, Ibrahimovic is able to deflect criticism using the same distraction techniques and grandiose statements – although elbowing someone in the face was maybe a little too far.

Scholes: “I love this [partnership Ibrahimovic & Pogba]. As a midfield player, you need to have a link with your centre-forward."

Ibrahimovic is essentially Pogba’s two-season safety blanket. By the time of the striker’s departure, the world’s most expensive player is expected to have matured as a leader and as the focal point of this side. His attitude and positional sense remain the only issues at this stage of his development, as his talents are undoubted – each of his five assists in all competitions have been converted by Ibrahimovic.

3. N’Golo Kante and Nemanja Matic
Forget John Toshack and Kevin Keegan. Cast Niall Quinn and Kevin Phillips aside. Tell Emile Heskey and Michael Owen they are not welcome here. Demand that Peter Crouch and whoever he is with – probably Jermain Defoe – stop pestering you on this number or you will alert the authorities.

If this is an era defined by suspicion, scepticism and uncertainty, then we all need something to truly believe in. What better than a ‘little and large’ combination, refined for the age not of strike partnerships, but of the all-action midfielder?

Cesc Fabregas has tried his utmost to make a lasting impression at the heart of Chelsea’s title challenge, but Antonio Conte has trusted the pairing of N’Golo Kante and Nemanja Matic more often than not. Quite right, too – they both possess an athleticism and reading of the game beyond many of their contemporaries. Chelsea have the joint-best defence in the Premier League in terms of goals conceded (20), but much of that is down to their midfield shield.

2. Sadio Mane and Philippe Coutinho
I love Roberto Firmino. I love his cartoonish white teeth. I love his boundless enthusiasm. I love how he was written off soon into his Liverpool career, yet no Reds player has scored more than his 19 Premier League goals since he joined in summer 2015.

But there is something about the combination of explosive excellence from Sadio Mane and the tremendous technique of Philippe Coutinho which appeals to every football sense. One can stretch any defence with his unrivalled dynamism and decision-making, while the other is capable of testing any goalkeeper from any range or angle. If Mane does not render a side obsolete with a dazzling run on one flank, it is probably because Coutinho has already carved them open with an inch-perfect pass or shot on the other side.

Firmino on Coutinho/Mané: "They're exceptional players, they're unique. I know what they're going to do before they even get the ball."

Firmino is a worthy filling, but Liverpool’s attacking sandwich would be a mess of ingredients without their bread and butter.

1. Harry Kane and Dele Alli
The pre-planned handshake was officially A Bad Thing, but the celebration Harry Kane and Dele Alli shared at the former scoring his first of two goals against Everton on Sunday pointed to a synergy unmatched in the Premier League. This is a pairing that the national team could potentially build around, and that their club already has.

Kane and Alli have never truly meshed for England, but Mauricio Pochettino has fostered the partnership in a way no international manager can. The latter’s close control and the former’s instinctive finishing form a wonderfully potent attack, and the oldest of the two is still only 23, and increasingly real.

The following is a list of the 15 Tottenham players both past and present who have assisted at least one of Kane’s 68 Premier League goals:

Now for added context: Eriksen and Kane have started 93 Premier League games together – almost twice as many as Alli and Kane (47). Tottenham fans must be understandably delighted that Harry met Alli.