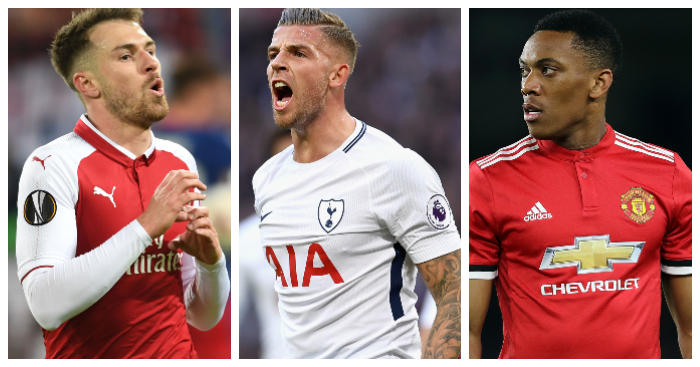 10) Christian Benteke
Roy Hodgson and Crystal Palace appear to have grown tired of the misfiring striker, who was named in Belgium’s 28-man extended World Cup squad despite a wretched season at club level. You can understand Hodgson’s stance. Since the manager was appointed, Benteke has netted only three goals, and one of those came from an inconsequential penalty he was given in sympathy.

But there will be a few managers out there who fancy their chances of coaxing out of the 27-year-old the kind of performances that made Liverpool pay £32million in 2015, before Palace spent a similar sum a year later. Benteke appears to have all the physical attributes a centre-forward might need, without the mentality to make the most of those assets. A boss who can make Benteke feel at ease, confident and wanted could be rewarded with a 15-goal striker.

9) Richarlison
The Brazilian admitted he was in a ‘bad phase’ earlier this month, which can be more accurately described as ‘2018’. Richarlison got off to a flying start in the Premier League, with his five goals and five assists before Christmas leading to the 21-year-old being linked with Manchester United and Chelsea. Since the turn of the year, however, he has failed to add to either of those tallies.

Everton appear to be among the clubs who believe it is just a phase, rather than a regression toward the mean. And with Marco Silva, the manager who inspired such bright form, seemingly heading for Goodison Park, it appears to be a convenient fit. Ademola Lookman may contest that view, but the Toffees may be the step-up Richarlison needs, rather than taking the leap to the Big Six before he has proven he can maintain his standards.

8) Alfie Mawson
When the asset-stripping starts at Swansea, Mawson and Lukasz Fabianski will be the players to attract most enquiries. The keeper, 33, has only a year left on his current contract and though bigger sides saw him as a capable deputy, Fabianski had enough of that at Arsenal. He wants to be a No.1 and given he would cost only £5million, the Poland stopper would be a smart buy for a mid-table side.

Mawson would perhaps cost four times that amount, but his value would be even greater had Swans not been relegated. As they seemingly are with everyone else on this list, Tottenham are sniffing around the ball-playing centre-half with it looking likely they will lose Toby Alderweireld. More on him in a bit …

7) Jonny Evans
Back in January, West Brom had Manchester City and Arsenal fighting to sign Evans for £20million. Half a season later, the Baggies will have to sell at an 85% discount, while the defender’s hopes of battling once more with the Big Six appear far slimmer.

At £3million, much like a Catalan cab, the 30-year-old is a steal. Leicester are apparently the first club to indicate to West Brom that they will meet Evans’ release clause but, understandably, the Foxes are somewhat perturbed by his agent’s demand for £4million to facilitate the sale of a player who wants to leave a club who have no choice but to sell for a pre-determined, miserly figure. Nice work if you can get it…

6) Luke Shaw
If United’s pursuit of Danny Rose or Alex Sandro didn’t ram home the message for Shaw, then Mourinho’s recent suggestion that Ashley Young could play around 50 games next season surely must. It simply won’t happen for Shaw at Old Trafford under this manager.

Mourinho isn’t the only manager to doubt Shaw’s attitude – Louis van Gaal and Roy Hodgson have also questioned the left-back publicly – but those buccaneering performances during his teenage years, plus his horrific double leg break, remain fresh enough in people’s memories that the 22-year-old still retains the status of being a hot prospect. Again, Spurs are mentioned as possible suitors, as if Mauricio Pochettino is the antidote to Mourinho’s perceived poison. But whoever takes Shaw will have to accept the risk that maybe his potential will never be realised.

5) Xherdan Shaqiri
The Switzerland star is reportedly up for grabs for £12million owing to a relegation clause in his Stoke contract. Understandably, after a season in which the winger scored almost a quarter of his side’s Premier League goals, Shaqiri is expected to have almost his pick of clubs.

The 26-year-old suggested last week that he would rather be playing in Europe next season, which may rule out Everton and West Ham, unless they find a few million ways to sweeten any deal. Of the clubs mentioned as being among his suitors, Shaqiri’s stated critieria would seem to put Spurs at the head of the queue, unless he opts for a move to the continent, where Roma could scratch his Champions League itch.

4) Aaron Ramsey
Amid all the uncertainty at present, Ramsey and his agent are sat waiting for someone at Arsenal to initiate talks. The Wales midfielder has only a year remaining on his current deal and with the next contract he signs almost certain to take him into his 30s, he needs to get it right.

So too do Arsenal, and their reluctance to get around a table may be perceived as a hint that they would rather cash in on Ramsey. Given the structure in place at the Emirates, the club do not need to wait for the say-so of the new manager to decide whether the former Cardiff midfielder stays or goes, and since the sale of Ramsey – for £35million, similar to Alex Oxlade-Chamberlain? – would boost the coffers of a new coach who would have only £50million to spend otherwise, perhaps the decision has been made.

3) Riyad Mahrez
Leicester have done phenomenally well to retain Mahrez’s services for this long but it seems likely that the winger will finally get the move he has craved. Manchester City have apparently rekindled their interest in the Algerian, who went on strike and submitted a transfer request when the Foxes placed a £90million price tag on his head when Pep Guardiola’s side made enquiries over a deal in late January.

Despite his behaviour, Mahrez was warmly welcomed back by the Foxes faithful, who don’t appear sad that it’s finally over, rather happy that they have been privileged to watch such a talent for the last five seasons. Perhaps they won’t be quite so accepting of the situation if Jamie Vardy leaves too, with Atletico Madrid supposedly interested. The pair combined for seven goals last term which puts them in a three-way tie for the Premier League’s most fruitful partnership. Losing both is not an option for the Foxes.

2) Toby Alderweireld
Jose Mourinho supposedly wants to revamp his defence and, though it is by no means Manchester United’s biggest problem, the fact that the back five which started the FA Cup final was signed entirely by Sir Alex Ferguson means you can understand the manager’s desire to freshen things up.

He and Louis van Gaal have both tried to achieve that before in the transfer market, with seemingly little success. Alderweireld, though, would be expected to buck that trend, such is his experience in the Premier League and the form he has shown at Tottenham over the past two seasons. The Belgian’s contract status at Tottenham is complicated, though with little sign of an extension being agreed, it looks likely that Spurs will look to cash in now rather than risk the possibility of losing the 29-year-old for less than half the amount being quoted at present.

1) Anthony Martial
Everyone reckons they know how this goes. United get their money back for 22-year-old Martial, who immediately flourishes – perhaps at Spurs, like everyone else – and thrives as soon as Mourinho’s shackles are removed. United and their manager look daft and Martial fulfils his obvious potential before moving to Real Madrid or Barcelona in a couple of years.

That scenario, though, only plays out if Mourinho has got Martial horribly wrong. Perhaps after working with the forward for two years, the manager is right to doubt Martial and whether he has the drive and mental fortitude required to make the most of his talent. There seems to be only one way to find out and that involves one of Martial or Mourinho leaving Old Trafford. This summer, it won’t be Jose…