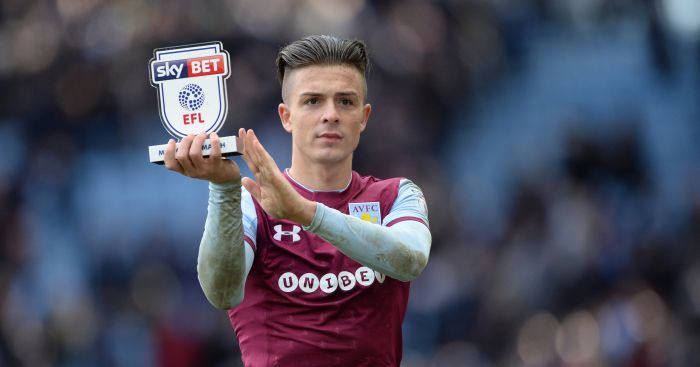 There’s a couple of months of the Championship season still to go and here’s who we think are the best ten players in the second tier right now. Enjoy!

Ruben Neves
Neves cost Wolves a reported £15.8million from Porto in the summer, which was not only a record fee for the Wanderers but also the highest price any Championship side has paid for a player. That kind of price tag not only brings pressure but a certain expectation that you will be head and shoulders above anything else in the division.

Splashing the cash doesn’t always reap the rewards but it certainly has so far for Wolves with Neves controlling matches from start to finish. Scorer of the spectacular, Neves also isn’t afraid to get stuck in, while his high 84.4% pass success percentage demonstrates his impact on most matches. Possibly his best strike to date came in Wolves’ 3-0 victory over Brentford when he expertly curled a free-kick into the top corner.

Diogo Jota
Like Neves, Jota has taken to the Championship like a duck to water, considering it can typically take a while for foreign players to adapt to the division. It’s not every day you can sign someone from a La Liga giant like Atletico Madrid as a Championship outfit, but that’s what Wolves did in the summer when they brought Jota in on a season-long loan.

Jota has scored 12 goals and created four more for his team-mates this term as Nuno Espirito Santo’s men hold onto the summit of the Championship table.

“I didn’t expect to score so many goals in the beginning because of the time it takes to adapt, but I’m happy to score and the team has helped me,” Jota recently told Sky Sports. “The biggest difference is the kind of game. Here it’s more physical and in Portugal it’s more tactical.”

Matej Vydra
His goalscoring record this season speaks for itself. The Czech Republic international has been in dazzling form, topping the Championship goalscoring charts with 17 goals in only 26 starts. It’s a huge difference from his poor performance last term as he only managed five in 33. He has now returned to the goalscoring heroics that saw him become a huge success at Watford and his goals have catapulted Derby into promotion contention. Vydra played just off Troy Deeney at Watford in his years at Vicarage Road and now he is playing in the ‘number 10’ role at Derby with great success.

Leo Bonatini
If the season ended now with Wolves being promoted then Bonatini could already claim to have played a big part in their promotion to the Premier League. The Brazilian – who is on loan from Saudi Arabian side Al-Hilal – started like a high-speed train, with 12 goals and five assists by early December. Since then the forward has made 13 appearances and failed to add to that total, leaving some questioning whether Wolves should sign him permanently if they go up. Recent injuries haven’t helped his cause and despite not scoring in over two months, his contribution is hard to ignore.

Ryan Sessegnon
Is the best current left-sided English player a 17-year-old in the Championship? It might be too early to tell you that but Sessegnon is certainly making waves. He is Fulham’s top scorer in the league this season with 12 goals from left midfield, while he has supplied his team-mates with another four. Sessegnon seems to have the football brain of a seasoned professional and his speed and agility are enough to scare any backline this level and beyond.

Sessegnon has already been linked with some of the biggest clubs in England and abroad and Fulham defender Matt Targett, who is on loan from Southampton, said recently: “He’s definitely right up there with the likes of Luke Shaw, Gareth Bale.

“The main thing for him is he has a lot of years ahead of him, he needs to keep working hard, keep his feet on the ground and I’m sure he’ll have a bright future. He’s so down to earth, very grounded and he’s a top professional which sets him apart from the rest.”

Bobby Reid
A midfielder by trade, Lee Johnson had to push Reid further up the field earlier this season due to an injury to record-signing Famara Diedhiou. The boy hasn’t looked back! His highest goal tally in a season until this campaign was three but Reid has eclipsed that with 13 Championship goals and there’s still a couple of months to go. The local lad spent time on loan at Cheltenham, Oldham and Plymouth before breaking into Bristol City’s Championship side in 2015-16. His astonishing workrate sets him apart from a lot of other strikers, while he continues to improve his hold-up play and aerial work game by game.

Junior Hoilett
Hoilett is experiencing somewhat of a resurgence under Neil Warnock at Cardiff City, with the winger enjoying his best form since his days in the Premier League at Blackburn Rovers. The Canada international has hit the back of the net on eight occasions this term and made another eight for his fellow Cardiff team-mates. Hoilett’s career was heading nowhere fast until he signed for Cardiff on a free transfer in the summer of 2016. Since then, Warnock has transformed him into a winger who has been unplayable at times this campaign. Hoilett now looks on the verge of being considered a Premier League quality player once again, nine years after he made his first appearance in the English top flight.

James Maddison
Reports in the January transfer window suggested that West Ham made a £12million bid for Maddison, with other Premier League clubs also thought to be sniffing around. The attacking midfielder began his career at Coventry before Norwich snapped him up for £3million, loaning him back immediately. Another spell on loan followed last season with Scottish Premiership side Aberdeen before new coach Daniel Farke took a liking to Maddison in the summer and handed him regular starts this season. The incisive ‘number 10’ has nine goals and five assists in the league this campaign – with his form earning him an England under-21 cap. Having played lots of matches at League One level for Coventry, the 21-year-old has been compared to Dele Alli on a regular basis.

“That is the beneficial thing about being lower down the leagues,” Maddison told The Independent in January. “Me being at Coventry, instead of a big Premier League club, probably helped me develop. You don’t get put in the academy system, playing under-18s and under-23s. I got to play first-team men’s football from a young age.”

Albert Adomah
Firstly, Albert Adomah is 30?! It must have been those years at a lower level for Harrow Borough and Barnet that made my brain tell me he was much younger. The London-born Ghanaian has certainly proved to be one of the best in the Championship this campaign with 13 goals and three assists from the wing. His pace and skill has been terrifying opposition defenses all season and crucially his workrate is second to none. Adomah’s goals and assists have won Aston Villa 19 points this season with nine match-winning goals.

Jack Grealish
He’s starting to prove the doubters wrong. Grealish may not have featured heavily for Aston Villa this season, having only made nine starts and 15 Championship appearances in total – but there is a feeling his current progress will push the Villans towards promotion back to the Premier League. Any off-the-field misdemeanours now seem to be behind him and the 22-year-old seems firmly focused on being a success in the Villa first team.

Three of his four assists and his only goal this campaign have come in his last six Championship matches, which hopefully signifies an end to his terrible luck with injuries. Being out of the media spotlight throughout their time in the second tier could be paying off as Villa increasingly miss his presence when he is absent. When missing for their recent defeat against Fulham, Steve Bruce’s side could only muster seven shots (two on target) with possession of only 37%.

“Since Jack came back in, he’s been immense,” Adomah told the BBC. “Even if he doesn’t score, he produces magic. He creates things from nowhere.”