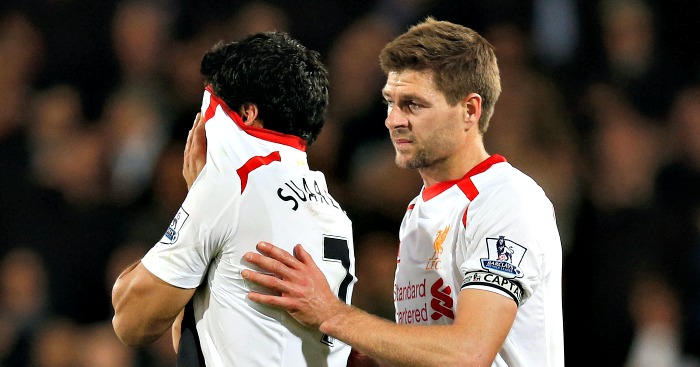 After bringing you the top ten most unworthy recipients of a Premier League winner’s medal, it’s time to remember those who never won the big one.

10) Paolo Di Canio
The scorer of the greatest and most memorable Premier League goal, but not the proud owner of a Premier League winner’s medal. Paolo Di Canio brought his own brand of batsh*t mental to England when he joined Sheffield Wednesday in summer 1997. Just ask Paul Alcock.

The controversial Italian enjoyed his best spell on these shores at West Ham, helping the club to fifth in his debut season. Di Canio twice rejected moves to Manchester United in the early 2000s, with Alex Ferguson particularly keen to sign him in 2002. The striker opted instead to bring his time in England to a close at Charlton.

9) Gareth Bale
Only four players have won multiple PFA Player of the Year awards. Alan Shearer was the first to do so, winning in 1995 and 1997. Thierry Henry claimed consecutive awards from 2003, as did Cristiano Ronaldo from 2007. Each are considered Premier League legends. The fourth has not been granted such a status yet, but there is time for Gareth Bale. That protracted move to Manchester United has been close to completion since 2012.

The erstwhile left-back endured a difficult start to life in the Premier League. Tottenham signed him in summer 2007, but his first involvement in a top-flight victory came two years and four months later, in late 2009. A change in position precipitated a dramatic upsurge in fortunes for the Welshman, with Bale the diamond in the Tottenham squads of 2010 until 2013 which secured the club’s highest-ever Premier League finishes. Twice Spurs finished fourth, and twice Bale was voted Player of the Year. Maicon still wakes up in a cold sweat to this day.

8) Les Ferdinand
Only Robbie Fowler has scored more Premier League goals without ever winning the title than Les Ferdinand. But where the former’s tally of 163 goals in 379 appearances rendered a highest league finish of third, Sir Les twice finished runner-up during his career. The striker struck 149 goals in 351 games, almost inspiring Newcastle to title glory on two occasions. Ferdinand scored 41 goals in 68 league games in his two seasons at St James’ Park, both of which ended with Kevin Keegan’s side finishing second to Manchester United. More on that later.

7) Gary Speed
A bonafide Premier League legend. The late Gary Speed was the only rival to Ryan Giggs’ crown of top-flight mainstay until his departure for Sheffield United in 2008. The central midfielder featured in every Premier League season until then, and remains the outfielder to have made the most appearances without winning the title, with 535. In an accomplished 23-year playing career, Speed’s crowning moment came in the 1991/92 season. In the final campaign before rebranding to the Premier League, the Welshman played all but one game as Leeds secured the First Division title. Third place with Newcastle in the 2002/03 season was the closest he came thereafter.

6) Marcel Desailly
A world and European champion months before joining Chelsea, Marcel Desailly twice came close to winning the Premier League with the Blues. Twice he missed out.

The Frenchman was considered one of the finest centre-halves in the world when he joined in 1998, aged 30. Two Champions League titles and two Serie A championships added a wealth of experience to Gianluca Vialli and Claudio Ranieri’s squads.

Yet while Desailly was named in the first Premier League Team of the Decade, his talents were not rewarded with the title. Chelsea finished third in his first season with the club, then second in his final season. Captain Desailly left for Qatar in 2004, timing his exit to imperfection; Roman Abramovich’s millions funded a first Premier League title at Stamford Bridge the following season.

“It was a shame for us, but mostly for the fans and the city. I was so frustrated for the fans. Forget the players, forget the manager, it was sad we didn’t win the title, mainly for Newcastle.”

David Ginola may protest that the fans were the biggest victims of Newcastle’s Kevin Keegan-enforced meltdown in 1995/96, but the Frenchman was rewarded with a runners-up medal for a season which should have ended in title glory. Twelve points was the gap the Magpies boasted over third-placed Manchester United in January. A 16-point swing in the following four months saw Ginola and his fellow ‘Entertainers’ finish second.

A year later, United forced them into second place once more. For all his extravagance and guile, Ginola’s search for a Premier League title was doomed, particularly when he joined Tottenham. Then Aston Villa. Then Everton.

4) Luis Suarez
The striker’s tears after Liverpool’s 2013/14 campaign shuddered to a halt live long in the memory. The Reds drew 3-3 to Crystal Palace in their quest to boost a goal difference far inferior to that of rivals Manchester City.

Just a few games prior, Liverpool had a nine-point lead over Manuel Pellegrini’s side. The Reds scored 101 league goals in that campaign; Suarez scored or assisted 41. The Uruguayan equaled the record for most goals in a 38-game Premier League season, hit ten goals in a single month in December 2013, scored three hat-tricks and broke John Ruddy. A subsequent treble in his first season at Barcelona likely softened the blow of disappointment in England.

3) Matt Le Tissier
Never mind the Premier League, Matt Le Tissier did not win a single trophy during his time at Southampton. For his countless volleys, peerless technique and legendary status at St Mary’s, the midfielder has just one PFA Premier League Team of the Year place to show for a stellar career. Nominated alongside him that year was one Timothy Alan Sherwood. What an honour.

Not that Le Tissier looks back on his career with sorrow: “Today it’s pretty rare to do what I did. But I’ve no regrets. I loved playing for Southampton.”

A move to Tottenham almost materialised in 1990, but Le Tissier made “the hardest decision” to stay. Much like his opportunities for England, offers from the country’s elite sides were never forthcoming. The first midfielder to score 100 goals in the Premier League never finished higher than 10th in as many top-flight seasons.

2) Gianfranco Zola
A legend. A magician. An icon. Gianfranco Zola won six trophies during his time at Stamford Bridge, but the closest he came to winning the Premier League was in the 1998/99 season. Chelsea topped the table throughout the whole of January, but could not prevent Manchester United completing the first leg of a historic Treble.

The Italian does have one league winner’s medal to his name – a Serie A title won with Diego Maradona’s Napoli in 1990 – but the Blues’ two-time Player of the Year could never claim England’s top-flight title, this despite a tally of 59 goals in 229 appearances.

Zola spent seven of the most wonderful seasons at Chelsea, arriving too soon to benefit from Roman Abramovich’s millions, but too late for the Premier League to truly benefit from his talents.

In 2002, 2009 and 2014, Gerrard fell tragically at the final hurdle in his quest for the only club title missing from his roll of honours in England (sorry, Club World Cup). Liverpool topped the Premier League in April 2002 before Arsenal decided to win their last 13 matches to claim the crown. The old Marcus Rashford, Federico Macheda, rudely interrupted Rafael Benitez’s charge in 2009. Gerrard himself thwarted the club’s dramatic title challenge under Brendan Rodgers two years ago.

Gerrard, often single-handedly, won one Champions League, two FA Cups, three League Cups, one Community Shield, one UEFA Cup, one Super Cup, and an almost endless list of individual awards during his 17 years in the first team at Anfield. The Premier League was the one he so sorely craved; it was the one which so painfully eluded him.