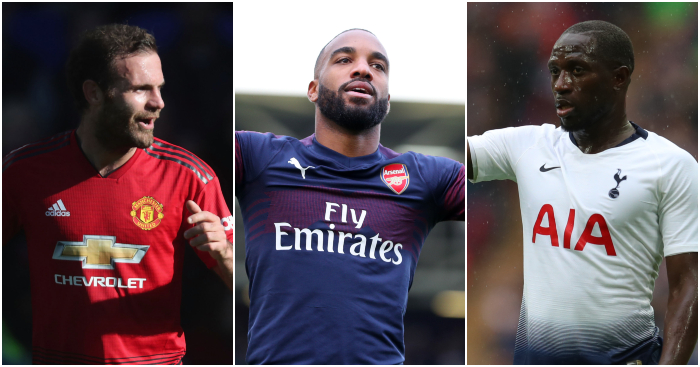 10) Bournemouth’s switch to direct football
Not direct football in terms of hoofing the ball up field – though there has been a fair bit of that – but in terms of playing speedy, direct attacking players who can genuinely hurt opposition defences, particularly the full-backs. So the single-minded Ryan Fraser and David Brooks flank Callum Wilson and Josh King, with the central midfield generally sitting quite deep. The emphasis has switched from possession football to dangerous football and it reaps rewards against all but the most defensive opposition.

You can read rather a lot more about Bournemouth’s tactical transformation here. The good news for Cherries fans is that it looks very much like a sustainable change.

9) Wolves’ commitment to a back three
Two years ago the back three was the new loom band. Now it’s pretty much the old loom band, except in one unfashionable corner of the Midlands where Wolves are the only Premier League club who still favour the formation. It was integral to their domination of the Championship, the unusually high wing-backs simultaneously pinning back opposition full-backs while providing an outlet for the passing of Ruben Neves and Conor Coady.

All Wolves have really changed after promotion is to upgrade in a couple of positions, with Rui Patricio, Joao Moutinho, Jonny and Raul Jimenez replacing those left behind by this leap into the elite of English football. Until Saturday’s defeat to Watford, it had gone rather well. “We are not really used to playing other formations,” said ball-playing defender Coady, hinting at a strength that could yet become a weakness.

8) Watford’s curiously narrow 4-2-2-2
It’s unusual for a Watford manager to be given the freedom to end a season, make summer plans and then put those plans into action the following campaign. Having been afforded that privilege, Javi Gracia came up with a blueprint. “This season he started with all the team, he had the pre-season, he can make all the changes he wants. The manager is very [focused on] the details. So he made this shape, 4-4-2, and I think it is the best shape for Watford,” said midfielder Abdoulaye Doucoure.

Although he cites the formation as a 4-4-2, it is far closer to a 4-2-2-2 with Will Hughes and Roberto Pereyra cast in the unfamiliar roles of that second middle pair, given license to roam the width of the pitch but without explicit instructions to use that width. The system is very much king, a far cry from last season when Richarlison’s loss of form directly led to Watford’s slide down the table. Most encouragingly, the system thrived earlier in the season with the physicality of Troy Deeney and Andre Gray, and then worked again at Wolves on Saturday with less physicality and rather more movement from Gerard Deulofeu.

7) Tottenham’s defensive forward role for Sissoko
Tottenham are not playing well. That they are on course for a record Premier League points haul while not playing well is testament to the management of Mauricio Pochettino, who has been handed last season’s squad – most of them broken after the World Cup – and was told to produce some kind of practical magic. It has not been easy.

Chief among those who have returned from the World Cup in some fairly rotten form is right-back Kieran Trippier. Now some managers might have replaced that right-back with one of the other two right-backs in their squad, but Pochettino’s idea was simply to give him some protection from a much-maligned but diligent midfielder. Moussa Sissoko has arguably been Tottenham’s best player over their last two narrow Premier League wins over Cardiff and West Ham.

“I think Moussa provides balance,” said Pochettino after a second successive standing ovation from Spurs fans who have come to accept that Sissoko may yet prove useful for as long as Tottenham’s rather more dynamic players are crocked, fatigued or just plain poor.

6) Everton’s faith in Sigurdsson as a No. 10
“For me, Gylfi has been trudging away outside on the left side, so play him in the position he wants to play and see what he can do,” said Sam Allardyce last season. But while Allardyce could see there was a clear and obvious problem, he lacked the patience to fix it with the clear and obvious solution: Play Sigurdsson consistently as a No. 10. Marco Silva showed no such hesitation and Sigurdsson is finally thriving in a medium-sized pond.

Sigurdsson’s productivity has been astonishing. He sits alongside David Silva and Willian – and ahead of Eden Hazard – in a list of Premier League players who have created the most chances this season. He may have become one-third of a punchline about Ronald Koeman’s penchant for slow No. 10s last season, but who needs pace when you have Richarlison to your left and Theo Walcott to your right? The square peg is in the square hole and the round pegs are rather happy about the service.

5) Manchester United’s release at Chelsea
No wonder Jose Mourinho was p***ed off that his team had been leaked hours before kick-off; he would have preferred a Big Reveal, with exclamations uttered and communicated by means of emoji simultaneously across Stamford Bridge and Twitter as everybody counted and counted again to find only two centre-halves and two central midfielders. In an away game! Against Chelsea!

This was the team most fans have been waiting to see – two central midfielders with Juan Mata, Anthony Martial and Marcus Rashford as attacking options behind Romelu Lukaku in belated acknowledgement that the best form of defence really can be attack when your defence is so ridiculously fragile.

It was only one game – and in that sense it clashes with many of the other choices on this list – but it may well be the one game that changes United’s season. Now to see if he dare do it again…

4) Arsenal’s Lacazette solution
Ignore the dullards who want to tell you that the xG statistics tell us that Arsenal’s form will dip; at least some of the truth is that the Gunners are reaping the rewards of spending rather a lot of money on two excellent strikers before and during Arsene Wenger’s final season in charge. Unai Emery was bequeathed some excellent attacking options – though he was not bequeathed a tactical plan to get both Alexandre Lacazette and Pierre-Emerick Aubameyang onto the pitch at the same time.

It was the Gabonese striker who started the season in pole position – with Lacazette restricted to the bench – but half-time of the Gunners’ first victory of the season against West Ham was the turning point of their (and his) season. Alex Iwobi came off, Lacazette came on, Aubameyang was shifted wide, and it worked. It continues to work, with Aubameyang growing into his new role, and Lacazette becoming a far more complete striker under Emery. “We are very happy but my message to him is: every day, don’t stop,” says Emery. He shows no sign of doing so.

3) Manchester City’s new central midfield option
Every time you think Pep Guardiola is running out of central midfield options, he delves into his squad of excellent wingers who fancy themselves as No. 10s and comes out clutching a new pass master. Last season’s patchy winger is this season’s truly wonderful central midfielder, with Bernardo Silva doing a passable impression of Kevin de Bruyne and David Silva in the opening weeks of the season.

The summer’s disappointment at not signing a new central midfielder has become autumn’s opportunity for Silva. “Bernardo can play there because he can fight,” said Guardiola in September. “He is skinny, small but wow…he has that sense of intelligence. You need to be strong and fast and he did it. Of course he can play there. His natural position is outside but it’s important for us to have players who can play in several positions.”

The contrast to Jose Mourinho and his team of ‘specialists’ could not be more stark.

2) Chelsea’s release of Eden Hazard from defensive duties
“I said to him that for me you can score 40 goals. But you have to spend far less energy far from goal.” Those words from new Chelsea coach Maurizio Sarri must have flowed down the ears of Eden Hazard like honey after years of being forced into ‘pointless’ tracking back by his two previous managers. Why have one of the best players in the world and then ask him to chase the opposition full-back? Just give him the ball, grab a sandwich and wait for the magic.

Some may worry that Chelsea – who have scored 20 goals in nine Premier League games – are too reliant on Hazard, but the truth is that the very best teams really should indulge the very best players. And in Jorginho, N’Golo Kante and Mateo Kovacic, Sarri has more than enough insurance to take a few risks with the Belgian.

1) Liverpool’s selectivity with their high press
On Friday, our Matt Stead had unearthed the astonishing statistic that Jurgen Klopp’s Liverpool had never beaten a side in 18th; it perfectly illustrated their struggle to break down defensively-minded minnows. That Cardiff’s victory had pushed Huddersfield into 19th by the time they played host to Liverpool means that statistic is still technically true, but the indication of a weakness has faded. For this is a Liverpool side that has beaten all opposition this season barring Chelsea, Manchester City and Napoli.

The key may lie with a change in tack, with Liverpool saving their frantic high press for special occasions. Klopp knew that pressing high was disruptive to the opposition but left them vulnerable to counter-attack. Sometimes it is far better to allow the opposition more time and space, thereby keeping any potential danger at arm’s length.

“It’s developmental. You have to develop, of course,” he said at Huddersfield. “We were 1-0 up and then we defended in a different space. Last year our big strength was high pressing and then when there were moments when they didn’t play football, it was like ‘sorry’.”

Is it less fun to watch? Yes. Is it more likely to bring a title challenge? Yes again.