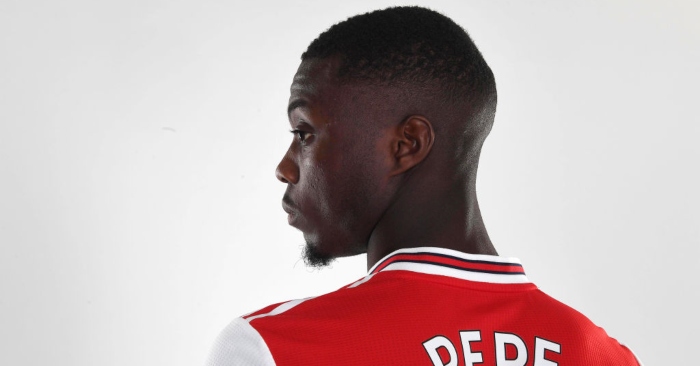 Most numbers are from the glorious transfermarkt…

10) AS Roma (£88.2m)
Players bought: Leonardo Spinazzola (£26.55m, Juventus), Pau Lopez (£21.15m, Real Betis), Amadou Diawara (£18.9m, Napoli), Bryan Cristante (£18.9m, Atalanta), Gianluca Mancini (£1.8m loan, Atalanta), Jordan Veretout (£900,000 loan, Fiorentina).
A swap deal took 20-year-old Luca Pellegrini to Turin, with Leonardo Spinazzola going the other way for a tidy sum. The left-sided midfielder/wing-back has only played ten Serie A games in seven years for Juventus; those seven years have featured a grand total of seven loan spells. Finally, he has a home. And he shares it with Bryan Cristante, who spent the second half of the season on loan in Rome. Oh and goalkeeper Pau Lopez (once on loan at Tottenham) and defensive midfielder Amadou Diawara. “We have been following Diawara for a long time, a boy who has highlighted his talent in Italy for some years,” said CEO Guido Fienga.

9) Arsenal (£105m)
Players bought: Nicolas Pepe (£72m, Lille), William Saliba (Saint-Etienne, 27m), Gabriel Martinelli (£6m, Ituano)
Well, nobody predicted a team with a reported £45m budget would actually spend £105m and still have money to spend on much-needed defenders. Both winger Nicolas Pepe and centre-half William Saliba arrive for a smallish up-front fee, with the latter going back to his French club on loan. This is seriously impressive business if Pepe is as good as his figures – and his admirers – suggest. Arsenal are not one of the favoured betting tips ahead of the season, but maybe they should be.

Fiete Arp scored 18 goals in 17 games at Germany Under-17 level so the hype around the 19-year-old has been real for some time. He joins Bayern for what looks like a pittance, and without any of the pressure that will come down on French defensive pair Lucas Hernandez and Benjamin Pavard. The former is now improbably Bayern’s record signing and he will be expected to slot straight in to partner Niklas Sule as Mats Hummels leaves. Bayern have taken their Champions League failure hard and they will spend more, with Niko Kovac ‘assuming’ they will sign Leroy Sane.

Israeli international Munas Dabbur scored a barely believable 37 goals in all competitions for Austrian side Salzburg last season so he really could be a bargain for Sevilla, who announced that deal in January. Then Monchi got involved and decided to throw a whole lot of money around – a lot of it in the direction of Ligue Un clubs. A large chunk of that money has been spent on a player they described as “one of the sensations of French football”; the depth of talent in France is so ridiculous that the 20-year-old centre-half Jules Kounde has not even been capped at France Under-21 level. Look at what you could have won, Arsenal.

Solid business was done early by Borussia Dortmund, with German international left-back Nico Shulz sealing his switch and saying: “Dortmund is a top club, whose style of football suits me really well. I think I can help the team. Together we can achieve something big.” Meanwhile, Hoffenheim make another large slice of profit. Schulz is joined by left-wing pair Thorgan Hazard and Julian Brandt, who between them cost less than a Christian Pulisic. Completing a quartet of early summer signings was Paco Alcacer, who scored 18 Bundesliga goals on loan from Barcelona last season. And then they brought Mats Hummels home for quite a few quid. They mean business.

Jesus, that’s a lot of signings. At first it looked like they were being sensible, but now it looks like they might have got a tad carried away. Anything less than a mid-table finish will now constitute abject failure.

“I spoke to Sarri on the phone before coming just to get to know each other. He was one of the reasons that I wanted to join here.  I’ve heard a lot of good things about him and I like his footballing philosophy and how he prepares his defence,” said Matthijs De Ligt as one of European football’s hottest prospects chose the Italian club over Spanish and English suitors. It definitely had nothing to do with money. He is at the forefront of a very real shift at Juventus, who have spent serious cash on players aged between 19 and 21 while throwing serious wages at free transfers. They have not taken ongoing Champions League failure well.

And now we reach the £200m club. “With the arrival of Frenkie De Jong we add talent, youth and Barça style to our sporting project,” said president Josep Maria Bartomeu in January, as they announced their plans for the summer. “We are convinced that he will be a key part of our team for years to come.” Joining the Dutch midfielder at the club is Brazilian right-back Emerson, who has been compared to Dani Alves (of course). He spent the second half of last season acclimatising to Spanish life with a loan at Real Betis. The third signing of the summer was Brazilian goalkeeper Neto, swapping clubs and goalkeeper jerseys with Jasper Cillessen. Then came Griezmann, though Atletico’s demands could nudge Barca’s bill up towards the £280million mark.

And there may still be Neymar to come.

This is quite the revamp for Atletico, who have not taken back-to-back Champions League failure very well. Astonishingly, they are still around £60million in credit, even after spending that crazy-arsed sum on a 19-year-old player with less than 50 senior appearances and one international cap, thanks to the sales of Lucas Hernandez, Diego Godin, Rodri and Antoine Griezmann.

“Atletico Madrid have started to place themselves among teams such as Liverpool, Inter, Juventus,” said Diego Simeone last month. Well, they have certainly spent more than all those clubs. They are now in the £200m club with the Spanish teams they are desperate to overhaul.

If the condition of Zinedine Zidane’s return was that Real Madrid spent money to bridge the gap to Barcelona, then they have certainly delivered. And we can expect them to spend this amount once again as they continue their revolution.

“We must work hard with the goal of fulfilling the dreams of our fans. It was not the year we were expecting and we will react strongly and decisively in search of our historical obsession, which is winning,” said Real president Florentino Perez as they unveiled Luka Jovic, one of three players signed who are 21 or under. They have since casually spent £43.3m on Ferland Mendy, the second most expensive French international Mendy who plays at left-back.