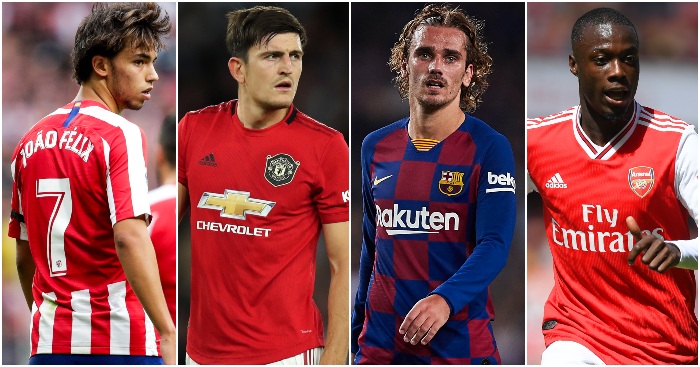 Doing a Fulham? Probably not. But the Premier League new boys have outspent the likes of PSG, Bayern Munich, Borussia Dortmund and AC Milan to buy a dozen new players, which is a bit mental.

Israeli international Munas Dabbur scored a barely believable 37 goals in all competitions for RB Salzburg last season so he really could be a bargain for Sevilla, who announced that deal in January. Then Monchi got involved and decided to throw a whole lot of money around – much of it in the direction of Ligue 1 clubs.

Pep Guardiola got his annual bonus of a shiny new full-back but most satisfyingly for the City boss, he finally found a replacement for Fernandinho. Beyond his most expensive new toys, don’t expect to see City’s other new recruits around the first team very often. Certainly not Angelino if his pre-season performances were anything to go by.

Some solid recruitment from United this summer, with all three signings making a bright start to life at Old Trafford – especially James, who has already scored as many Premier League goals for the Red Devils as Alexis Sanchez. But it still isn’t nearly enough.

Remember all those stories that Arsenal were broke and had around £40million to spend this summer? The Gunners spluffed almost four times that figure in the market this summer, even if many of the payments have been structured over Christ knows how many years. A return to the Champions League simply cannot take as long.

There was a Man Utd theme running through Inter’s transfer business this summer with the two biggest signings coming straight out of Ole Gunnar Solskjaer’s bin. Lukaku and Sanchez aside, though, Inter have done nine other deals, even if a few involved returning to sender in loan arrangements. That should keep Antonio Conte quiet. For now.

The headline deal of Juve’s summer was undoubtedly the signing of De Ligt, who opted for the Serie A champions over all the other big boys in Europe. For all the fuss it created, the fee was hardly enormous for a player of his ability and potential. Juve were also shrewd in their recruitment of free agents and still managed to turn a profit in the summer market.

Atletico spent a sodding fortune – but still they stayed in the black to the tune of around £70million this summer. Joao Felix has already shown signs of being a bargain, while Trippier appears to have remembered how to play football again. Diego Simeone isn’t f*cking around this season. Unfortunately, neither are Atletico’s rivals…

Barca didn’t get the one they wanted with Neymar stranded at PSG for at least half a season after neither Spanish side could copper up enough cash to afford the Brazil superstar. Barca also had to wait for Antoine Griezmann but a year later than planned, they finally got their man. Not that spending almost £230million has done them much good in the short term; Barca have made their worst start in 11 years.

Real’s summer is also a tale of the one that got away, with Paul Pogba stuck at Manchester United after Ed Woodward refused to roll over and have his belly tickled by Florentino Perez. Presumably the plan was to raise funds for Pogba by trimming the fat around their already bloated squad, but there were no takers for the likes of Gareth Bale, Isco and James Rodriguez. So Pogba has been left hanging and Zinedine Zidane is having to make do, despite having almost £275million chucked at his squad.