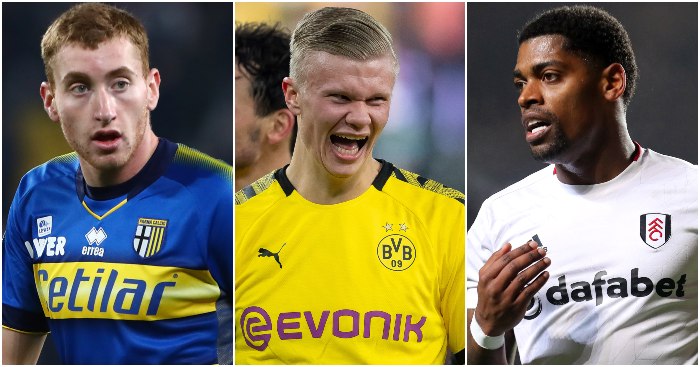 One Mexican side, a Championship team but no one from the Premier League…

10=) Sevilla – £16.6m
Signed: Youssef En-Nesyri (Leganes)
Sevilla signed the Moroccan striker after triggering his £16.6million release clause to help cover for the exits of Moanes Doabur to Hoffenheim and Javier Hernandez to LA Galaxy. En-Nesyri was said to be close to joining Brighton last summer.

10=) Benfica – £16.6m
Signed: Julian Weigl (Borussia Dortmund), Yony González
Despite signing Colombian winger Gonzalez from Fluminense all the money Benfica have spent so far has gone to Dortmund in return for Weigl on a four-year contract. Weigl’s arrival allowed Gedson Fernandes to join Spurs and it could be an inspired bit of business, especially if the Germany midfielder eventually tempts a bigger club to meet his £83million buy-out clause.

8) RB Leipzig – £16.6m
Signed: Dani Olmo (Dinamo Zagreb)
Leipzig reportedly beat off competition from Chelsea and AC Milan to land the Spain midfielder for a fee of around £16.6million but add-ons could take the final amount to up to £21million. That still looks good value and should Olmo develop in the way many expect, Leipzig will likely double their money.

7) Borussia Dortmund – £17m
Signed: Erling Haaland (RB Salzburg)
Just a single signing is enough to get Dortmund on the board – and what a signing! If he maintains his current goal rate of one every 11 minutes, he could finish the Bundesliga season with around 125 goals. That fee doesn’t include the massive payments to Mino Raiola and Haaland’s old man. Still, well done Man Utd for sticking to your principles, and good luck in your pursuit of Odion sodding Ighalo.

Håland makes that look easy. It's not.

5️⃣ goals for Dortmund and he hasn't even played 90 minutes of football for them yet! 👏👏👏 pic.twitter.com/qxe7r9tUvF

6) Fulham – £24m
Signed: Ivan Cavaleiro (Wolves), Bobby Reid (Cardiff), Michael Hector (Chelsea),  Jordan Archer (Oxford), Terence Kongolo (Huddersfield).
The only English representatives on this list have been reinforcing their squad for another late surge to the promotion line. The Cottagers took up their option to sign Cavaleiro permanently for an undisclosed fee and they didn’t specify how much they paid for Reid or Hector either but some have guessed at £10million and £8million respectively. Archer was a free signing while Kongolo joined on loan.

5) Real Madrid – £26m
Signed: Reinier (Flamengo)
The Brazilian attacking midfielder, 18, signed a six-year deal at the Bernabeu having only made his senior debut for Flamengo at the end of July last year. “He’s going to be brilliant,” promised Brazil Under-23 boss Andre Jardine.

3) Juventus – £31.50m
Signed: Dejan Kulusevski (Atalanta)
Juve won the race for the in-demand Atalanta midfielder, who had spent the first part of the season on loan at Parma. The 19-year-old will spend the rest of the campaign there too after Juve agreed to loan back their £29.7million new boy. The Serie A champions’ final bill for Kulusevski could reach £37million if he satisfies all the add-on criteria.

Only Erling Haaland is younger than Dejan #Kulusevski among the players with at least five goals in the top five European leagues in the 2019/20 season#CrociatiStats 📊💛💙 pic.twitter.com/yWZ9DvwxjT

1)  Napoli – £44.3m
Signed: Stanislav Lobotka (Celta Vigo), Amir Rrahmani (Hellas Verona), Diego Demme (RB Leipzig)
Gennaro Gattuso’s side top the list so far having spent almost £45million on three players it’s quite possible you’ve never heard of. Midfielder Labotka was the priciest of the three having cost £21.5million, with Napoli supposedly fending off competition from Arsenal and West Ham. Rrahmani was returned to sender on loan for the rest of the season after joining for around £12.8m, while Demme cost just under £10million.