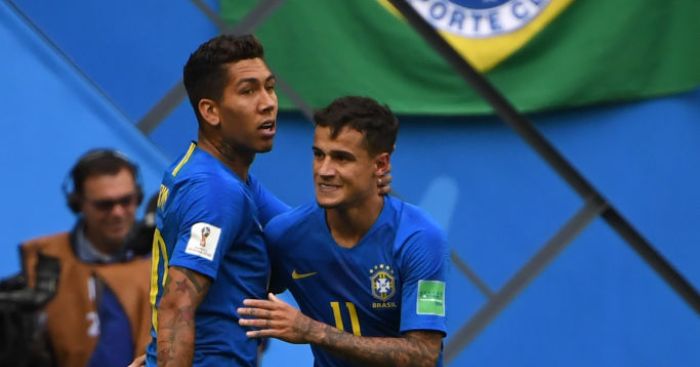 10) Lucas Leiva (Liverpool)
It was a little more reserved and measured than Sir Alex Ferguson’s “he is a f**king great player…and youse are all f**king idiots” but the sentiment was much the same. “People just don’t know how good Lucas is,” said Rafa Benitez in December 2008 of Juan Sebastian Veron’s South American (obviously not actual) cousin.

Lucas had been audibly booed at Anfield during a 0-0 draw with Fulham, one of those many stalemates that would cost the Reds dear come May. But Benitez was adamant that the attacking midfielder who had joined from Gremio was more than qualified to excel in a deeper role. He was in the minority.

Considering Lucas was immediately pitched against Steven Gerrard, Xabi Alonso, Javier Mascherano and Momo Sissoko upon joining, his was an uphill battle from the start. These were masters of the art, leaders in the midfield. For a young player with no discernible speciality, his development would take time and patience Liverpool could ill afford.

Yet by the time he left after a decade’s service, Lucas had earned the respect and adulation of an entire fanbase. Be it the defence-splitting assist in a demolition of Newcastle in 2008, the Player of the Year award in 2011, the ability to be within a few yards of Jon Flanagan’s post-goal erection in a 5-0 bulldozing of Tottenham in 2013 or the commanding performance on Jurgen Klopp’s debut in 2015, Lucas soon proved himself to be a cult hero. Even three years after leaving, he has at least 25 more Premier League appearances than any other Brazilian. Unluckeeeeee.

🎂 – Happy Birthday, Lucas Leiva. This is one of the best videos on the internet. #LFC pic.twitter.com/npn9f8oWJq

9) David Luiz (Chelsea and Arsenal)
The truth lies somewhere between PlayStation-controlled clown and world’s most expensive defender who battled his way through a Champions League final while injured to become a European champion. There is a murky middle ground where David Luiz resides: nowhere near as bad as some would have you believe, but certainly not as good as his honours list would suggest.

That does include a Premier League title, which was something of a reward for perhaps his most understated and impressive season. Luiz was a bedrock of consistency and maturity in Antonio Conte’s first Chelsea campaign, thriving in a three-man defence that showcased his greatest qualities and negated his weaknesses.

That was the player Arsenal hoped they were signing last summer in a move that has shown only how Luiz requires a team to be built around him rather than the other way around. While he is marginally more flawed than genius, there was a brief time during which few were better.

8) Willian (Tottenham and Chelsea)
There has been at least one Chelsea game every season since Willian joined in which he looks utterly unplayable. He was excellent in both matches against Liverpool in 2013/14, shone against Aston Villa in September 2014, was named Player of the Year after a wonderful Champions League group run in late 2015, sank Tottenham in the FA Cup in April 2017, rendered Barcelona seemingly besotted in February 2018, inspired numerous Europa League victories under Maurizio Sarri and thwarted Spurs again in December.

Perhaps it is fitting that his best individual campaign came during one of Chelsea’s worst in the modern era. The 31-year-old is a wonderful complement to the collective but if he regularly stands out for positive reasons there is likely something wrong. Still, his particular brand of hard work and flair has made him an endearing addition, equally capable of raising the bar as he is tripping over it. You do not make 70 appearances across two title-winning seasons by accident. Just ask David May; he only managed 45.

FEATURE: Willian is in our rather good free transfer XI available this summer.

7) Alisson (Liverpool)
Before timelines are flooded, comments sections are raided and reminders are issued that this does indeed mean more, hear me out: it is testament to Alisson’s brilliance that he features so highly, not an insult to his quality that he has failed to challenge towards the top of this meaningless list.

The basic truth is that his impact has been remarkable but fleeting. He will have added at least a league title to a collection that already incorporates a Champions League winner’s medal by May and is undoubtedly the world’s best player in his position, but he has still made fewer Premier League appearances than Laurent Depoitre, Trevor Morley and Eoin Jess.

With a clean sheet rate of 54.5% and a win rate of an even more impressive 83.6%, he will usurp many of these names in time. Longevity is one of only two things standing against him: when you can get the same odds for Xherdan Shaqiri or Wesley Moraes to be named PFA Player of the Year, you concede that goalkeeping magnificence of even the highest calibre might never be fully appreciated.

6) Philippe Coutinho (Liverpool)
Liverpool sought to cut out the middle man in January 2013. Southampton had agreed a £10m fee with Inter Milan to sign Philippe Coutinho but new manager Mauricio Pochettino could not quite land his primary target. The Brazilian was bound for Anfield.

His time on Merseyside can be rather neatly summed up by who he replaced and who replaced him. Coutinho made his debut as a substitute for Stewart Downing in a defeat to West Brom; the proceeds from his sale helped fund moves for Virgil van Dijk and Alisson five years later. No player was as important in the club’s transformation and transition from post-Hodgson ignominy to Klopp glory.

In the month prior to his January 2018 departure he played eight games for Liverpool, scoring seven goals, assisting four and captaining the club. Barcelona seemed to be getting one of the world’s best midfielders.

Things did not quite transpire that way. And while his departure was necessary for Liverpool to grow and improve – and his proposed return would be a backwards step – that does nothing to invalidate his efforts. Coutinho scored against Arsenal, Chelsea, Everton, Manchester City and Tottenham in the Premier League, with a Europa League strike against Manchester United thrown in for good measure. If you gave him 30 yards, sight of a crossbar and a semblance of space, he did not discriminate.

5) Ederson (Manchester City)
The best way to compare Ederson with his compatriot and contemporary down the M62 is to consider his record by this point in Alisson’s career. The Liverpool keeper has 30 clean sheets and 46 wins in 55 games, with one Golden Glove award and potentially another accompanying his impending maiden league title. After the same number of appearances for City, Ederson had 34 clean sheets, 46 wins and one Premier League winner’s medal, with one more soon to arrive.

His performances have undeniably dipped since, and the intrigue will be in whether Alisson suffers a similar relative decline. It seems unlikely. But then, without Ederson there would perhaps be no Alisson in the first place. If Van Dijk persuaded every club that centre-half was a position worth investing in as heavily as elsewhere, the Brazilian had a similar effect in terms of goalkeeping.

Consider what he inherited. City conceded 39 goals in the 2016/17 season, with Claudio Bravo starting 22 games and Willy Caballero 16. Eliaquim Mangala played as often as Aymeric Laporte in Ederson’s debut campaign and Vincent Kompany featured in less than half of City’s Premier League matches. It was a mess that he helped stabilise and revolutionise.

4) Juninho (Middlesbrough, Middlesbrough and Middlesbrough)
It has become commonplace for promoted Premier League clubs to flex their financial muscle when reaching the Promised Land. Fifteen years on, no team has done it quite as effectively as Middlesbrough.

His first game was an invaluable insight into a concept England’s top flight struggled with initially: the foreign footballer as emotionally invested cultural symbol instead of half-arsed mercenary who didn’t like the food or weather. Within 11 minutes of a debut throughout which the Riverside crowd bellowed his name, Juninho collected a Nigel Pearson pass inside his own half, slalomed past Gary McAllister and sliced an inch-perfect through ball into the path of Jan Aage Fjortoft for the opening goal. By the 74th, he was receiving a yellow card for rather clumsily going through the back of Tony Yeboah.

It was a perfect juxtaposition of the warrior with dazzling feet. Juninho enjoyed three separate spells at Middlesbrough and shed tears twice: when they were relegated in 1997 and when they won the League Cup in 2004. The intervening years were spent proving why Liverpool were among those who courted him.

3) Gilberto Silva (Arsenal)
The Brazilian media’s description of Gilberto Silva as the player who ‘carried the piano for Ronaldo and Rivaldo to play their tunes on’ at the 2002 World Cup was telling. A country that prided itself on expression, creativity and flair had readily accepted a robust, disciplined and mechanical midfielder as one of their own.

By the end of that summer, Gilberto sought to test the acoustics in north London. He was instrumental in another timeless success by sacrificing himself for Thierry Henry, Dennis Bergkamp and Patrick Vieira to tickle the ivories. He was the Invisible Invincible.

“I am always comfortable doing the hard work in the middle,” Gilberto said upon his 2008 departure after six memorable years in the capital. “For me, it is an honour. It’s what I was made to do.” The perfect foil was every bit as important as those he was designed to cover. And he helped bring Fred to the Premier League.

‘The committee have yet to explain how they came up with the figure of £29million to sign Brazilian forward Roberto Firmino from Hoffenheim.’

Well exactly. How is it that the most important cog of perhaps the most dominant machine in the history of team sport was signed for so relatively little? Why is Liverpool’s transfer committee still yet to explain how they came up with the figure of £29million for a unique, invaluable and possibly even irreplaceable player?

It has been quite the journey, from right wing-back in a 3-1 defeat at Old Trafford under Brendan Rodgers to Klopp’s inimitable “engine”. The 28-year-old is more intrinsically linked to Liverpool’s recent success than any other player, scoring a glorious winner against PSG that ignited their Champions League campaign in September 2018, netting the goal that crowned them world champions in extra-time last December and contributing eight goals – all away from home and five of which were winners – to this Premier League season. That committee has a hell of a lot to answer for.

1) Fernandinho (Manchester City)
‘No country can apply the rich mix of ingredients you gain from a top Brazilian player,’ wrote Sir Alex Ferguson in his 2013 autobiography.

“I think that a team without a Brazilian isn’t a team. I think their talent is fantastic and the creativity of the Brazilian player cannot be measured,” said Jose Mourinho in April 2018.

“Van Gaal is the Hitler of the Brazilian players,” said former Barcelona striker Giovanni in 2010.

Two out of three former Manchester United managers ain’t bad. But even Louis would struggle to deny the supremacy of Fernandinho, a player without whom Pep Guardiola might not have enjoyed his time in Manchester quite so much.

The common consensus when he joined was that £34m was a lavish amount to spend on a 28-year-old defensive midfielder. His first of three Premier League titles arrived in a debut season during which he rarely stood out beyond Yaya Toure or David Silva in midfield. Yet Guardiola unlocked a potential hitherto unseen.

“He can do absolutely everything. He’s incredible,” the Spaniard once said. Having played him at right-back, left-back, centre-back and in a range of midfield roles over the years, it’s difficult to argue.

“The biggest legacy I’ll maybe leave is the fact that I have re-opened doors for Brazilians at this club,” Fernandinho himself added last year. It would be foolish to suggest his wider impact has been restricted only to the Etihad.