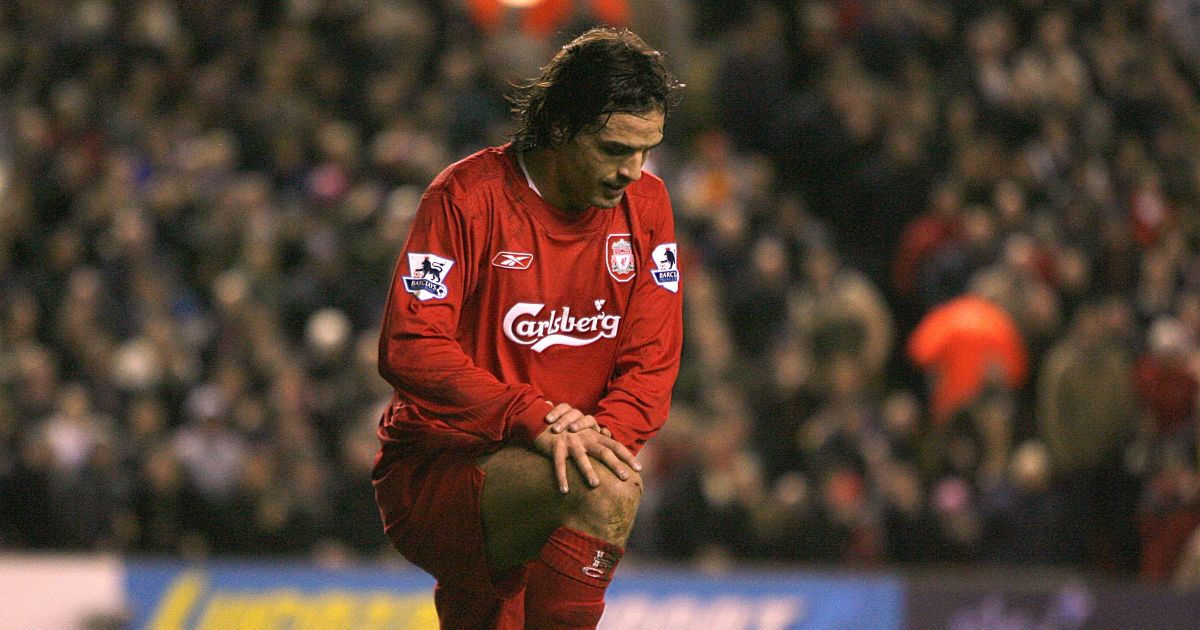 With the inspiration of Liverpool midfielder Thiago, who has started two victories since becoming a European king in 2020, here are ten players who featured in a Champions League final victory at any point before #flopping in the Premier League.

10) Jari Litmanen (Liverpool and Fulham)
“We have signed a world-class player,” Gerard Houllier boasted 20 years ago. “He comes with a reputation which needs no improvement. He’s one of the most exciting signings we have ever made.”

Yet the Jari Litmanen that Liverpool thought they had procured on a free transfer in January 2001 no longer really existed. The incredible mind was still there but the body could not keep up.

Steven Gerrard described him as ‘like a chess grandmaster’. As Jamie Carragher once noted: “I wish we’d have got him years before.” But the stars did not quite align until Litmanen was 29, ostracised at Barcelona and carrying a troublesome ankle problem which stunted any suggestion of progress at Anfield. The Finnish forward scored nine goals in 43 games, did not play in any of the club’s five finals in 2001 and left as the right man at the wrong time in summer 2002 with one last dig at the manager that revelled in his joining 18 months prior: “It’s strange that he was so pleased when he signed me and then decided to not use me.”

Twenty years ago today Jari Litmanen made his debut for Liverpool. A lovely footballer who was probably past his best by the time he arrived, but he went on to play for another 10 years! pic.twitter.com/7KugO7dp8u

9) Christian Panucci (Chelsea)
Until 2019, Christian Panucci held one record he never seemed likely to relinquish. The legendary Italian defender was the youngest player to start in successive Champions League finals (22y, 1m, 11d) for almost two-and-a-half decades, only for some ‘liability’ to come along and ruin it.

The 1994 final will provoke happier memories for left-back Panucci, whose Milan side could not quite defend their crown 12 months later in defeat to Ajax. He exacted a measure of revenge by starting at right-back for Real Madrid as they lifted their first European Cup for 31 years in 1998, before heading on loan to Chelsea in the summer of 2000.

“I want to stay here for two, three or four years,” he declared upon joining, a desire that would be extinguished as he left in January after his seven Premier League starts resulted in a single win.

8) Christian Karembeu (Middlesbrough)
While the Frenchman undoubtedly improved in the latter half of his solitary year at Middlesbrough, it was an upturn in relative form that came from a frustratingly low base. Christian Karambeu went from playing the entire 1998 Champions League final to watching the 2000 edition from the bench, then struggling before Christmas on Teesside that same year until the appointment of Terry Venables as Bryan Robson’s co-manager.

The former world champion acclimatised a little better to a relegation challenge thereafter, plundering a Boxing Day winner against Liverpool and forming a dependable enough midfield partnership with Pauls Ince and Okon. Yet for at least half of the campaign he spent in the Premier League he was at least a mild disappointment that failed to live up to expectations.

The only man who could share stories with eventual manager Paul Lambert about even appearing in a European Cup final was Ibrahim Afellay, and not even he would suggest replacing Pedro in stoppage time when 3-1 up and Wayne Rooney is begging for mercy was akin to nullifying Zinedine Zidane for 90 minutes. Afellay played a little more for Stoke but had roughly the same impact as that time-wasting Wembley substitution a decade ago.

6) Bastian Schweinsteiger (Manchester United)
Not many players can claim to have scored the only Premier League goal of their career against that season’s champions. It was Bastian Schweinsteiger who converted a Daley Blind corner against Leicester in November 2015 in perhaps the single slowest goalscorer-assist combination in the sport’s history. Thankfully nothing else of note happened in that game.

That was one of precious few highlights over almost two years during which Schweinsteiger seemed to spend as long flying around the world to watch wife Ana Ivanovic play tennis as he did on the pitch for Manchester United. The German started 22 games in all but did mention to get an apology out of Jose Mourinho, which is roughly equivalent to his 2013 Champions League winner’s medal in terms of prestige.

In hindsight, Schweinsteiger was the right player at the wrong time. That's five of Van Gaal's 10 United signings gone already.

5) Fernando Morientes (Liverpool)
The logic was sound, as Liverpool signed the otherwise ineligible Fernando Morientes in January 2005 purely in the hope that his Champions League pedigree would rub off on a squad with little experience of going deep in the competition. The Spaniard had won it in 1998, 2000 and 2002 with Real Madrid, reaching the 2004 final on loan at Monaco and finishing as top scorer that year with two of his nine goals coming against Chelsea in the semi-finals.

Without him, group-stage hero Neil Mellor would not have even made it onto the Ataturk pitch to celebrate Liverpool’s unlikely conquering of Milan. But his impact at Anfield was otherwise limited, Morientes scoring 12 goals in 60 games and looking every bit like the archetypal La Liga striker who was not comfortable with either Liverpool or the Premier League’s style of play. Perhaps it was simply as a consequence of signing someone from Real Madrid, but the anticipation did not match reality.

4) Angel Di Maria (Manchester United)
That five-word phrase will be associated with Angel Di Maria forever in some quarters. One unnamed former teammate’s description of the Argentinean as “talented but a complete fanny” resonated with large swathes of a Manchester United fanbase that celebrated the arrival of the 2014 Champions League man of the match for a British record fee. As if to encapsulate the excitement, Sky Sports even resurrected their Player Cam feature specifically for the winger’s home debut. Di Maria revelled in the limelight, scoring with a cross from a free-kick and assisting with a mis-hit shot that doubled up as an assist for Juan Mata in a 4-0 thrashing of QPR.

His next match featured that glorious chip in the baffling 5-3 defeat to Leicester, soon followed by a strike against Everton; he laid goals on in both games en route to 11 Premier League assists in his debut season. But Di Maria simply never settled, neither in Manchester nor into Louis van Gaal’s plodding style that robbed him of any explosiveness or creativity. He moved to Old Trafford for £59.7m in August 2014, heading to PSG for around £44m a total of 333 depressing days later.

3) Karl-Heinz Riedle (Liverpool and Fulham)
Liverpool have actually been burned by the European Cup-winning flame many times before. Feeling that his callow side required a little more experience in the summer of 1997, Roy Evans acquired the services of Paul Ince and Oyvind Leonhardsen to complement the midfield talents of Steve McManaman and Jamie Redknapp. But it was the arrival of Karl-Heinz Riedle, the inspiration behind Dortmund’s conquering of Juventus that year and still one of only seven men to score twice in a Champions League final, that was seen as crucial.

He was expected to replace Stan Collymore and unburden the brilliant Robbie Fowler, yet when the budding property developer was struck down by injury in the 1997/98 season, it was a teenage Michael Owen who stepped up instead. Riedle did little more than teach the homegrown pair how to channel Pippo Inzaghi by constantly being offside, albeit with a fraction of the inherent goal threat the Italian possessed. He scored 15 goals in 76 games before leaving for First Division Fulham in September 1999 and becoming their caretaker manager, alongside Evans, when Paul Bracewell was sacked the following March.

2) Roque Junior (Leeds)
There was an element of fortune attached to Roque Junior’s status as a world and European champion. He started six games as Brazil lifted gold in Japan and South Korea in 2002 while benefiting from a kind enough run to glory, while his Champions League success a year later came as he was introduced as a second-half substitute, his error soon after going unpunished while he soldiered on injured as Milan had used all their changes in the absolute worst final in history.

Leeds celebrated his arrival on loan later that year but Roque Junior was simply another ingredient added to their recipe for disaster. They would have gone down with or without his input in 2003/04 but the centre-half made sure to fit in, Leeds conceding 20 goals in his five Premier League games, including when he was sent off on his home debut against Birmingham. There were two surprise goals in eventual League Cup defeat to Manchester United but the enduring memory for most supporters will be of that dishevelled picture in the aftermath of his chastening meeting with Duncan Ferguson.

I have had cause to share with some friends one of my favourite football pictures ever, and I wanted to share it here.

1) Andriy Shevchenko (Chelsea)
When Kepa was genuinely being billed as the worst signing in Premier League history at one stage last season, those with memories longer than a week or so happily recalled how he wasn’t even the biggest transfer misfire in Chelsea’s history. That accolade surely belongs to Andriy Shevchenko, signed for a British record fee of £30.8m at the age of 30 and bestowed upon a manager who never really wanted him, to be loaned back from whence he came two years later and leave for nothing 12 months after that.

Twitter had mercifully been launched barely a month before Shevchenko’s deal was announced; the Ukrainian would not have lasted as long as he did if @KalouSZN was incessantly quoting his key passing statistics each week. His signing did spark one of the best seasons of Didier Drogba’s career in response but 22 goals in 77 games was a risible return for the supposed final piece of the Stamford Bridge jigsaw.