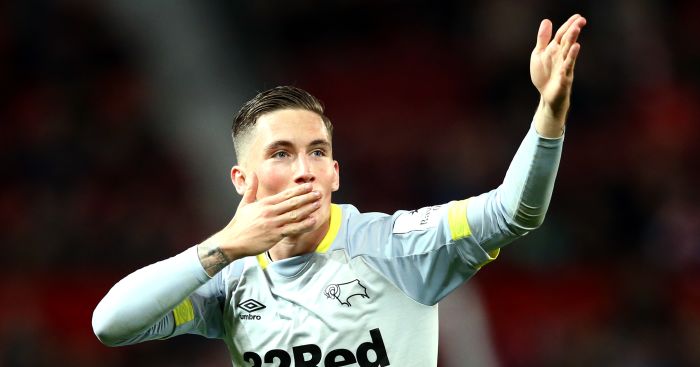 The Championship table is starting to take shape with Leeds United and Norwich rising to the top of the league as we approach the halfway point (and isn’t that terrible?), while there has rarely been a more open campaign. We take a look at some of the standout performers so far. Agree?

10) Ryan Shotton (Middlesbrough)
Perhaps the clearest sign of how important Shotton has been to Middlesbrough’s push up the Championship table is just how much they have missed him in recent weeks. He made his return in the 1-1 draw with Blackburn after missing seven league matches for Tony Pulis’s outfit. In that time they took ten points from a possible 21, where previously they had been pushing for an automatic promotion slot. Shotton played a key part in their early-season form with his long throws and defensive acumen proving the perfect fit for Pulis’s tactics. They also conceded seven – half the goals they have conceded in the whole Championship season so far – when Shotton was unavailable.

9) Harry Wilson (Derby)
If Derby don’t get promoted this season, their chances of hanging onto the Liverpool loanee for another season seem slim, with Wilson looking a class above at this level. He scored seven goals in 13 Championship matches for Hull City last season and he has continued in similar vain this time around with his seven goals – not mentioning that free-kick against Manchester United – helping Derby to a play-off position ahead of the festive fixtures. A total of 22 key passes is up there with the best in the league too; it’s that kind of form that has made him a regular at international level.

8) Harvey Barnes (West Brom)
Barnes has steadily progressed up the leagues in the last couple of years. A spell on loan at MK Dons in League One was quickly followed by another successful spell on loan at Barnsley in the Championship last season. He also played three times in the Premier League last term for the Foxes before his potential lack of playing time meant he moved on loan to West Brom. Barnes started out on the left wing for the Baggies before he found his position at No. 10 when Darren Moore’s side switched to a 3-4-1-2 formation. His pace and dribbling on the break has been frightening this campaign, leading to goals such as the spectacular one against Sheffield Wednesday. With eight goals and four assists to his name, there have even been suggestions he could be recalled in Janaury by Claude Puel.

7) Bradley Dack (Blackburn)
The rumoured on-off boyfriend of Love Island star Olivia Attwood. Who you ask? Yeah, us neither. That’s not the only reason why the forward has been in the media spotlight lately, as he continues to take the Championship by storm. Newly promoted Blackburn Rovers are sitting pretty in 11th position with Dack building on his 18 goals from their season down in League One. You wouldn’t believe it, but it’s his first season in the Championship. The 24-year-old has spent his career to date in the lower leagues. His relationship with striker Danny Graham up top has helped him score nine goals and provide three assists for his team-mates this term. He’s been at the heart of most of Rovers’ good play.

5) Kalvin Phillips (Leeds United)
The central midfielder has arguably been Leeds United’s best performer behind Pablo Hernandez and that’s despite being subbed off twice before half-time by Marcelo Bielsa. At 23, Phillips still has plenty of time to develop but he has managed to make the defensive midfield position his own in the Argentine coach’s line-up, though he has also played at centre-half and excelled there too. Bielsa did not overhaul his Leeds squad when he took over in the summer and Phillips has been one of the major beneficiaries of his faith. He came through the academy at the club and was used in a more advanced role last campaign, scoring seven goals. Without a goal this term, Phillips is looking a more accomplished player and comfortable in a new defensive role. Phillips recently said: “I’m finding it easier to get on the ball, I get a lot of the ball which I like. Confined passes, so it’s good.”

4) Neal Maupay (Brentford)
When asked if he wants to play in the Premier League sooner rather than later, Maupay recently said: “Of course, I don’t want to put up barriers. When I came to the Championship, my goal was to go up with Brentford or play in the top tier.” Thirteen goals in the Championship so far this season would indicate Maupay was playing for a club fighting up the top end of the league. That was the case for Brentford but they have plummeted down the table since as Dean Smith’s departure to boyhood club Aston Villa hit them hard. The Frenchman has also seen a dip in form but he has still managed two goals and two assists in his last six matches, with Brentford only winning one of those games. Not only has he scored a load, he’s managed to chip in with six assists – meaning he has been directly involved in 19 goals so far this campaign. Maupay deserves his place on the list.

3) Teemu Pukki (Norwich City)
It has been a season-long Pukki party at Carrow Road as the Finland international’s goals have fired Norwich to the top of the Championship table. Pukki scored the winner as the Canaries beat Bolton 3-2 on Saturday to keep them top of the pile. He has now scored 12 goals and provided two assists. Who saw that coming? Norwich have pulled off possibly the transfer of the Championship season bringing him in on a free from Brondby after scoring 69 goals in 161 appearances for the Danish side.

I never thought I’d say this but what a signing Teemu Pukki is👏👏 https://t.co/IFMadjdJeO

2) Pablo Hernandez (Leeds United)
This man has pedigree. Playing over 100 times for Valencia in La Liga and over 50 matches for Swansea while they were in the Premier League has stood Hernandez in good stead for his Leeds journey. Having scored seven goals last campaign, he started this season on fire and has already matched last term’s total, with the winning goal on the road at Sheffield United recently his seventh. Hernandez has been tormenting Championship full-backs and supplying his team-mates with bags of chances with six assists and the joint-top number of key passes per game (2.9) in the league. Bielsa summed it up nicely earlier in the season when he said that Hernandez was “one of the best players in his position that I have worked with in my career”.

1) Oliver Norwood (Sheffield United)
Sheffield United signed Norwood in the summer on loan from Brighton – a deal that becomes permanent in January – to give their midfield some much-needed competition, with long-term absentee Paul Coutts’ injury costing them dearly last season. Now, the Blades look in a better position than ever to mount an assault on the Premier League, with the Northern Ireland international key to Chris Wilder’s side.

Norwood has been promoted in each of his last two seasons, once automatically with Brighton, before winning last year’s play-off final with Fulham. He has been a lynchpin for United that has allowed fellow midfielder John Fleck to thrive in the 3-5-2 system they use so effectively. The 27-year-old attempts more passes per game than anyone in the Championship (76.3), while he is ranked joint-first for key passes per game too (2.9) and he puts more crosses in than any other player (3.2). On top of that, he has three goals, two assists and five man-of-the-match awards to his name.