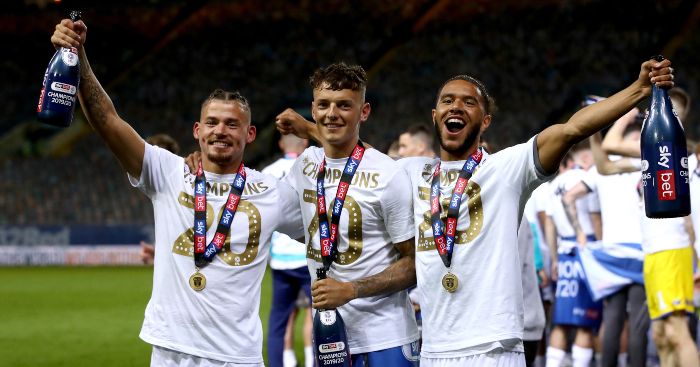 Honourable mentions go to Semi Ajayi, Romaine Sawyers, Karlan Grant, Matt Grimes, Jarrod Bowen and Rhian Brewster, among many, many others from Leeds and beyond. The Championship is quite good, it turns out.

10) Matty Cash (Nottingham Forest)
“I just want to prove people wrong,” said Matty Cash in August 2019, discussing how “loads of people” scoffed at the idea he could establish himself as Nottingham Forest’s first-choice right-back. After three years playing across the midfield at the City Ground and Dagenham and Redbridge, such scepticism was understandable. And without a long-term pre-season injury to Tendayi Darikwa, the opportunity might never have presented itself. But when it did, Cash converted beautifully.

Carl Jenkinson was actually signed last summer to deputise yet he would not be the player that comes to mind when discussing international calibre right-backs at Forest. A ludicrous level of competition might prevent Cash from ever earning an England cap but it won’t be for a lack of talent. Sabri Lamouchi saw something no-one else could all those months ago.

9) Pablo Hernandez (Leeds)
Only one member of Los Bajitos will evoke fond memories of those glorious Valencia years in the next Premier League season. David Silva has carried that torch for so long while Juan Mata’s flame has been flickering for years. David Villa, meanwhile, will be more than content with watching former club and international compatriot Pablo Hernandez take to England’s top flight once more.

The 35-year-old was a fine player for Swansea almost a decade ago but, with a brief sojourn in Qatar and a La Liga relegation in between, he has become a modern Leeds icon. The goals and assists help – nine of them each this season – but he brings a certain class and prestige few other players in the entire country can hold a diminutive Spanish candle to.

Premier League clubs linked: None. There’s not enough money in this or any other world.

Leeds United agreed a deal to bring Pablo Hernandez to the club from Al-Arabi.

The Spanish magician conjured up nine goals and nine asists from 36 games this season, including 3 and 3 post lockdown.

8) Aleksandar Mitrovic (Fulham)
It would be a shame were Aleksandar Mitrovic ever to score again on these shores, such is the charm of a record which includes 21 goals in the Premier League and 42 in the Championship. He certainly seems half as effective the higher the level, yet that does nothing to dilute his brilliance as this season’s top scorer in the second tier.

Mitrovic has more than three times as many goals as any Fulham player this season. The Cottagers would still have excelled without him, be it in the sort of different system they deployed with Aboubakar Kamara at its tip against QPR in November, or with Bobby Reid selflessly and tirelessly leading the line. Mitrovic has missed eight games, invariably through suspension, and Fulham’s record in those fixtures is W6 D1 L1 F10 A4, with the play-off second leg at home to Cardiff the only defeat. Yet they are undeniably more potent and exciting with him than without.

Premier League clubs linked: None. He has a bit of a reputation.

7) Jed Wallace (Millwall)
As pristine as Bartosz Bialkowski has kept his linen, Jed Wallace might feel justifiably aggrieved – or suitably unbothered – at his teammate being named Millwall’s Player of the Season. No goalkeeper recorded as many clean sheets during the regular season as Bialkowski; no player matched Wallace in registering double figures for goals and assists.

That provided much of the fuel for an unlikely and eventually unsuccessful play-off push. There was arguably no more consistent attacking threat in the entire Championship than Wallace between October and early December, while setting up three goals in a 4-3 defeat to QPR in his final game of the season was testament to his unerring excellence even as those around him capitulated, not least Den favourite Bialkowski.

Premier League clubs linked: None. Yet.

6) Kalvin Phillips (Leeds)
The four most expensive players ever signed from the Championship were all from relegated clubs. Ryan Sessegnon and Moussa Sissoko cost Tottenham £25m and £30m respectively; the former figure represented Everton’s initial outlay on Jordan Pickford in a deal that could rise as high as the latter number; Liverpool spent £25m on Georginio Wijnaldum. Be it from Fulham, Newcastle or Sunderland, the selling team had only slipped into the Championship a month prior, each player imbued with Premier League experience.

Kalvin Phillips would have comfortably dethroned James Maddison as the costliest second-tier signing never to have played in the top flight. Tottenham and Aston Villa were said to have entered the bidding for the midfielder last summer but Leeds stood firm at their £30m valuation. The subsequent months only justified Marcelo Bielsa’s faith in a player whom promotion might not have been possible without. He has been a necessary anchor to steady the Leeds ship, a defensive midfielder as productive on the ball as he is proficient in the tackle. The clamour for the 24-year-old to receive an England cap will surely extend beyond Elland Road next season.

5) Ollie Watkins (Brentford)
It would take the same fee Leeds demanded for Phillips a year ago to prise reported target Ollie Watkins from Brentford this summer. While many a forward has been unable to reproduce their success in a higher, more tactically advanced and pressurised division against theoretically better defenders, the 24-year-old has shown enough to suggest he could be more Jamie Vardy than Jordan Rhodes.

Watkins is not defined by any one attribute. He is a phenomenal finisher but also tremendous at link-up play; fast enough to provide a constant counter-attacking threat yet so capable a passer as to thrive in a team that dominates possession. Ten goals with his right foot and seven with his left included one of each in wins against both Derby in August and Bristol City in January. Eight strikes with his head – a hat-trick of them away at Barnsley in September – only further underlines the virtues of a striker with no obvious weakness after just one season in the position.

You can inject Mick McCarthy actually being excited about Ollie Watkins into my veins. "The only thing wrong with him is that he's too good looking" Unprecedented scenes from Big Mick.

4) Eberechi Eze (QPR)
Chris Ramsey spotted him, Gareth Ainsworth trusted him, Ian Holloway promoted him, Steve McClaren honed him and Mark Warburton built around him. Eberechi Eze, at 22 and in a position developing players often find it difficult to establish themselves in, has benefited from the input of five Englishmen – four eclectic coaches and one diligent scout – to become one of the Championship’s best midfielders.

He is the youngest player to start every league game for their club this season. He has starred on the right, as against Wigan in August, thrived on the left, particularly on New Year’s Day against Cardiff, and revelled in a more central position home and away at Preston. The Nigerian-born Eze will not spend long in the Championship’s bottom half, one way or another.

3) Ben White (Leeds)
Not since Tom Heaton in 2015/16 had someone played every minute of a Championship-winning campaign. In terms of outfielders, Alex Pearce was the latest to achieve that feat, not missing a single kick with Reading in 2011/12. Ben White’s career trajectory seems destined to reach much higher levels at Leeds, Brighton or beyond.

It has been a remarkable ascension through the English football pyramid for White, who made his professional league debut on loan at Newport in 2017/18, spent the latter half of 2018/19 with Peterborough and was chosen by Leeds to replace Pontus Jansson last summer. League Two to League One to the Championship in as many seasons, with the 22-year-old almost guaranteed to make an impact in the Premier League in 2020/21. The only questions now are which side will be fortunate enough to have him, and how have Brighton managed to accrue the best central-defensive depth in the entire top flight?

Premier League clubs linked: All of them.

2) Matheus Pereira (West Brom)
It was reported in some circles as an obligation. While technically true after his 30th substantial appearance of the Championship season triggered an automatic purchase option in his loan from Sporting Lisbon, the wording implies that West Brom were bound only by contractual agreement to sign Matheus Pereira permanently for £8.25m. In reality, they could hardly have rejected such an opportunity even if they had a perverse desire to do so.

He has been, in effect, a cheat code. A player of such quality never belonged in any division lower than than the top, even if his first steps were understandably tentative. Pereira played 56 minutes of West Brom’s first four Championship games, as well as half an hour in the first round of the League Cup. Two assists on his full debut against Blackburn in late August lit the touchpaper that has burned long into the following summer. He has been astonishingly good, creating the most chances per 90 minutes (3.1) of any player with 23 or more starts, and being fouled more often than anyone. Those who consider Jack Grealish to be the star of the west Midlands are in for a shock.

Premier League clubs linked: None. West Brom have only just properly signed him. Steady on.

1) Said Benrahma (Brentford)
“I’m not thinking about that at all at the moment,” was Said Benrahma’s response when asked about his future this week. It is easy not to get caught up in such frivolities when personal promotion is a formality, whether your current employers join you or not.

Brentford have become masters at flipping transfer market properties: buying low, developing well, selling high. The most they have ever received for a player is £20m from Brighton for Neal Maupay in summer 2019, followed by the £12m investments made in Chris Mepham and Ezri Konsa by Bournemouth and Aston Villa respectively over the past 18 months. Benrahma, signed for £2.7m from Nice in July 2018, will only raise that bar higher.

He has been a creative revelation, scoring a pair of hat-tricks against Hull and Wigan and leading the controlled destructions of Luton and Sheffield Wednesday in November and March. Ethan Pinnock, Christian Norgaard and Watkins have formed a phenomenal spine but Benrahma is the peerless brain.