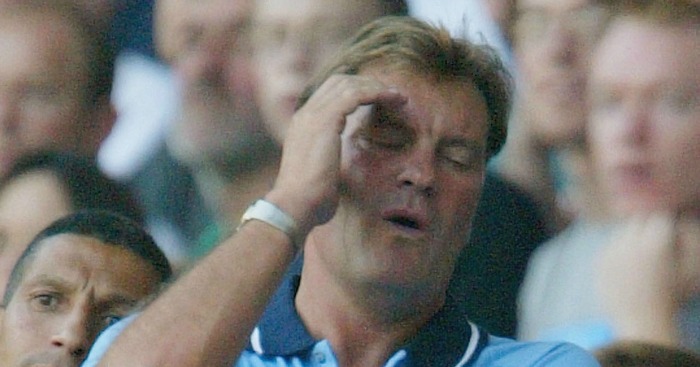 10) Stuart McCall – Bradford City
Having come through the club’s youth system and played 268 games for the club before moving to Everton, McCall was already a Bradford legend before he moved back to the club a decade later to play another 175 matches. In his first season back he gained promotion to the Premier League, and in his second he helped to keep Paul Jewell’s side in the big time.

In his autobiography – extra points for the title ‘The Real McCall’ – the midfielder expressed his desire to manage Bradford and, in June 2007, he took over the job on a full-time basis.With the club relegated to the fourth tier for the first time in 25 years, McCall’s obvious target was immediate promotion.

A tenth-placed finish in his first season was underwhelming, as was ninth in the following campaign. McCall offered to quit but stayed for the 2009/10 season. He finally left in February 2010 with Bradford in 85th position out of 92 in the Football League ladder.

9) Alan Shearer – Newcastle
‘Taking over as 4th manager that season, in the bottom three and only 8 games to go. Hardly comparable,’ was Shearer’s response to a tweet from Times journalist Rory Smith about his fear that Zinedine Zidane could struggle to harmonise the complex and difficult relationships at Real Madrid and ‘be their Alan Shearer’.

However, the insinuation was not that Shearer was or is a terrible manager, but that simply installing a club legend as manager isn’t a magic click of the fingers to tidy up the mess. That’s an entirely fair comment to make.

Shearer was appointed at Newcastle with no managerial experience in order to provide the club with a shot in the arm to fight relegation, and he failed in that task. Having taken over with Newcastle in 18th position, two points from safety, they ended in 18th, one point from safety. Shearer won one of his matches in charge.

‘With the word around Newcastle strongly suggesting Shearer will be in charge next season, providing he gets reasonable backing from owner Mike Ashley, then there may be more where this came from,’ wrote the BBC’s Phil McNulty after that Middlesbrough win. ‘Alan Shearer made a substitution with the Midas Touch as Newcastle United clinched the victory.’ Is there more than one Midas?

8) Ossie Ardiles – Tottenham
It would be impossible to accuse Ardiles’ football of being tedious, but there is nothing quite as exciting as winning matches. Unfortunately for Tottenham’s Argentinean manager, he won far too few.

Ardiles was a roaring success in his season in management at Swindon Town, leading the club to their highest-ever league position. That was about his biggest managerial success in England. He endured a dreadful time at Newcastle before eventually ending up at Spurs, the club where he had spent a wonderful decade as a player.

Despite scoring more goals than Arsenal in fourth place, Spurs finished 15th in Ardiles’ first season, his tactical naivety continuously undermining the club’s progress. He was finally sacked in October 1994, with Spurs still in the bottom half despite making a number of big-money foreign signings.

7) Kenny Dalglish – Liverpool
Look, we all know where it went wrong for King Kenny Liverpool manager Mk II. The difficulties of following Roy Hodgson, poor league form, bad signings and questionable decisions over wearing t-shirts all feature. So instead, enjoy the most wonderfully optimistic assessment of Andy Carroll’s time at Anfield, as written by Dalglish himself:

‘Before people start criticising Andy for his time at Liverpool, though, let’s just remember a couple of things. There were only three domestic trophies up for grabs in England last season and Andy won one of them. He made a big contribution to Liverpool winning the Carling Cup, and scored the winner against Everton in the FA Cup semi-final.

‘If I’d brought him on earlier in the final against Chelsea, he might have won that for us as well. As it was, he scored a goal and tormented their defence – and then destroyed John Terry and Branislav Ivanovic at Anfield in a league game against Chelsea a few days later. The longer Andy stayed at Liverpool, the greater the improvement there was in him.’

Six goals in 44 league games, at a cost of £35m. People are far more likely to remember that, Kenny.

6) Stuart Pearce – Nottingham Forest
I am so biased I almost don’t expect you to listen, but bear with me. Put in some headphones, turn up the volume, and just watch the video below of Pearce walking out for his first match as Nottingham Forest manager. It makes me want to cry.

Pearce was the obvious answer for Forest owner Fawaz Al-Hasawi. His appointment was a crowd-pleaser, a PR quick win and an attempt to try the last remaining strategy to gain promotion without sustainable planning or patience.

For a while all looked rosy, with Forest top of the Championship in late September. By February, Pearce had been sacked with his side 12th in the table and having won three of their last 21 league matches. Pearce’s tactics had looked suspect, and there was a belief around the club that the players had lost faith in a man who had always been a deity to Forest supporters.

5) Bryan Gunn – Norwich City
When Gunn retired from playing in January 1998, few thought he could ever become a Norwich villain. With 478 appearances and the club’s Player of the Season award when Norwich finished third in the Premier League, the goalkeeper had bona fide hero status.

Eleven years later, and Gunn was celebrating victory in his first match in temporary charge of the club, a 4-0 win over Barnsley. Players and fans demanded that he be given the job until the end of the season, and the Norwich board accepted their pleas. Even when Norwich were relegated to the third tier for the first time in almost 50 years the club still kept faith. Only now, supporters were far less supportive of their manager.

Gunn was sacked after a shambolic 7-1 home defeat to Colchester on the opening day of the League One season, with fans protesting his continued employment both during and after the game. Enter Paul Lambert, and canary-coloured redemption.

4) George Swindin – Arsenal
Whereas Chelsea’s eighth most recent full-time manager was Avram Grant in 2007/08, Arsenal’s is George Swindin, in charge of the club between 1958 and 1962. That’s absolutely mental.

Having played almost 300 games for the club either side of and during the Second World War, Swindin established himself as Arsenal’s first-choice goalkeeper and won three League Championships and an FA Cup. He moved to Peterborough United as their player-manager in 1954 and won three Midland League titles. All good so far.

Appointed as successor to Jack Crayston at Highbury, Swindin took the club to third in his first season before struggling to maintain that promising start. Despite Arsenal’s illustrious recent history, Swindin was unable to win a single trophy before resigning in May 1962 to let Billy Wright take his place.

3) Glenn Hoddle – Tottenham
When Daniel Levy cut short his honeymoon in order to sack Hoddle in September 2003, the Tottenham chairman did not mince his words: “There has been an unacceptable lack of progress and any visible sign of improvement.”

Hoddle had finished 11th in his first season and ninth in his second, but Tottenham had far higher ambitions than mid-table obscurity. When Hoddle spent £12m in the summer of 2002 and then promptly took four points from his first six league games, the end was predictable.

“Following two seasons of disappointing results there was a significant investment in the team during the summer in order to give us the best possible chance of success this season,” Levy said. “Unfortunately, the start to the season has been our worst in the Premiership. It is critical that I, and the board, have absolute confidence in the manager to deliver success to the club. Regrettably we do not.”

Hoddle flirted with management again at Wolves, but was never successful again. But he’ll still get touted for a big job by OAFPFM (The Official Association for the Friends of Proper Football Men).

2) John Hollins – Chelsea
If playing 592 matches and captaining Chelsea wasn’t enough for Hollins to be treated as a Chelsea legend, returning to the club in 1983 to help them gain promotion back to the First Division did the trick. Having retired, he was immediately given a coaching role at Stamford Bridge, Chelsea through and through.

When Hollins then took over from the retiring John Neal in June 1985, the initial signs were promising. Chelsea looked set for a title challenge in 1985/86 but eventually fell away to finish sixth, the same position as before Hollins took over.

When Chelsea then fell to 14th the following year, alarm bells started ringing. Hollins was finally sacked in March 1988, with the team on a four-month run without a league win that would see them relegated back to Division 2.

1) Graeme Souness – Liverpool
Having been appointed at Anfield on a five-year contract just before the end of the 1990/91 season, Souness took Liverpool from second to sixth in his first season in charge. That was then repeated in the first season of the Premier League, before the Scot was sacked in January 1994 after FA Cup defeat against Bristol City. Liverpool were fifth in the league.

Souness’ managerial spell is not cherished at Anfield. The football was dour, the goals dried up and the manager conducted an ill-advised and ill-timed interview with The Sun newspaper. He admitted afterwards that he should have resigned for that decision alone.

“I’ll tell you what I would say to him,” said Jamie Carracgher in 2010 when asked about spending an evening with Alex Ferguson. “I’d say he never knocked Liverpool off their f**king perch. That’s nonsense that. Graeme Souness did that. United were competing with Norwich and Aston Villa for their first title. They weren’t competing with Liverpool, were they?” Wonder if they talk about that quote when at Sky together?