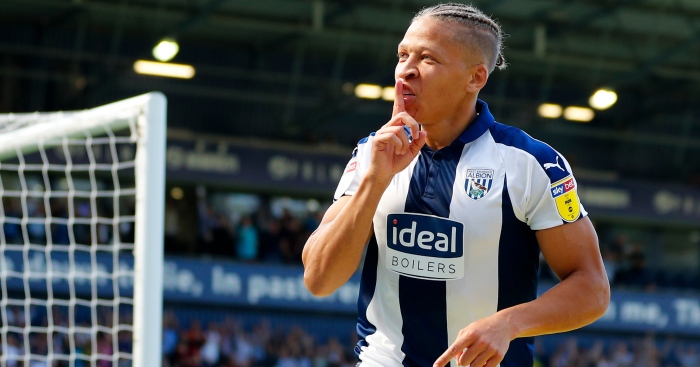 When we say ‘all-time’, we mean since 2004. We have a who’s who of the best minutes-per-goal strikers in the Champo. We have set the minimum minutes at 4,000 to weed out the one-season wonders.

It’s worth noting, by the way, that none of the top all-time total goalscorers are on this list – Ross McCormack, David Nugent, Jordan Rhodes and Billy Sharp have all scored over 100 Championship goals. But at a slower rate…

10) Leonardo Ulloa (one goal per 191 minutes for Brighton)
Scoring 23 goals in just a season and a half for Brighton was enough to earn the Argentine an £8m move to Leicester City and eventually a Premier League winner’s medal. You’ve probably forgotten already that he went back to Brighton on loan last season. Not so magical that time.

9) Lewis Grabban (one goal per 186 minutes for Crystal Palace, Millwall, Bournemouth, Norwich, Reading, Sunderland, Aston Villa and Nottingham Forest)
The top scorer in the current Championship season (14 goals in 19 games for Forest) has been doing this for an awful long time – he’s played the most Championship minutes of any player on this list. He is on course for his second 20-goal season; the first came for Bournemouth in 2013/14 and was enough to earn him a ridiculous move back to the Cherries in the Premier League. Know your place, Lewis; he has scored just one top-flight goal in his career.

8) Andre Gray (one goal per 179 minutes for Brentford and Burnley)
An astonishing rise. Just three years after leaving Luton Town and National League football, Gray was Premier League Watford’s club-record signing. Betwixt and between he scored a raft of goals in the Championship for both Brentford and Burnley. The goals have dried up a tad for the Hornets, but he is going out with a member of Little Mix so there are both swings and roundabouts here.

7) Sylvan Ebanks-Blake (one goal every 175 minutes for Plymouth and Wolves)
If it hadn’t been for a goalless nine-match Championship spell at Ipswich towards the end of his career, Ebanks-Blake may have been even further up this list. The Cambridge-born striker started off his Championship career at Plymouth following his release from Man United as a youngster. Twenty-one Championship goals in 18 months saw Wolves take a chance. And it was there that he forged a brilliant partnership with Chris Iwelumo to fire them into the Premier League with 25 goals in his first full season at Molineux.

6) Rickie Lambert (one goal every 169 minutes for Southampton and Cardiff City)
It seems astonishing that Lambert has only played 60 games in the Championship as he does seem the quintessential Championship striker. The fourth of his four consecutive 20-goal seasons catapulted the Saints into the Premier League, but he could do not repeat the trick for Cardiff in 2016/17 before he retired. He is the only man on this list with 11 England caps. That’s 11 whole England caps.

5) Dean Ashton (one goal every 167 minutes for Crewe and Norwich City)
It now seems remarkable that Crewe were a Championship club in 2005. That was where Ashton cut his teeth and a ridiculous 17 goals in 24 games in the first half of the 2004/05 season earned him a £3m move to Norwich in the Premier League. A year later, ten goals in 28 games for a Norwich side back in the Championship earned him another move – this time to West Ham for £7m. He was forced into early retirement at the age of 26 but his record stands as a prolific striker at this level.

On this day in 2006, Dean Ashton broke his ankle in England training after being called up for the first time…

4) Charlie Austin (one goal every 166 minutes for Burnley and QPR)
Forty Championship goals in two seasons for Burnley really should have earned Austin a Premier League move in 2013 but his failed Hull medical prompted a switch to Harry Redknapp’s QPR instead. An astonishing record of 47 goals in 89 games for the Hoops saw him score goals through promotion and relegation. He returned to the Premier League in January 2016 when he joined Southampton, and has been struggling against a return to the Championship ever since. He shouldn’t fight it; he’s brilliant there.

3) Dwight Gayle (one goal every 155 minutes for Peterborough, Newcastle and West Brom)
Ah, there he is. Gayle’s Premier League seasons have reaped 7, 5, 3 and 6 goals. In the Championship he has scored 13, 23 and now 9 (in 17 games) goals. And that’s why Newcastle fans should trust Rafa Benitez when he shunts players and they then thrive again in the second tier. Mind you, he’s now lost his place in the Baggies team…

DWIGHT GAYLE IS ON THE BENCH….

2) James Beattie (one goal every 150 minutes for Sheffield United)
Played only 18 months in the Championship but was a class apart – scoring a couple of quite wonderful free-kicks for the Blades between pretty poor spells for Everton and Stoke in the Premier League. To put things into perspective, Steve Morison has matched his 34 Championship goals in more than three times the number of minutes. Beattie – surprisingly capped five times by England – is now back in the Championship assisting Garry Monk at whichever club he is managing this week.

1) Tammy Abraham (one goal every 138 minutes for Bristol City and Aston Villa)
The intriguing man on this list because we don’t know if this is his level. What we do know is that he looks very good at this level, scoring 23 goals for Bristol City on loan from Chelsea, earning him a spell at Swansea City and an unlikely brace of England caps. That he is back there with Aston Villa suggests that he might not make it at Chelsea. His 11 goals in 14 games for Villa suggest he will make it somewhere. They love him.