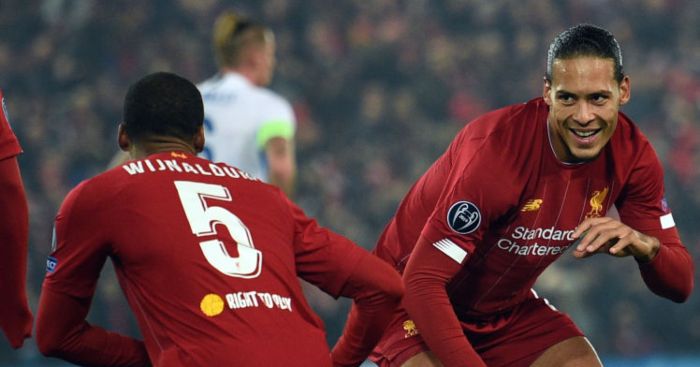 Virgil van Dijk is in the top ten. But is he in the top three? The Premier League has had some Dutch legends…

10) Georginio Wijnaldum
It is fairly common knowledge that Roberto Firmino (221) has made the most Liverpool appearances under Jurgen Klopp. Second is little surprise either; while the importance of James Milner (196) has waned somewhat, he has been an integral part of the German’s revolution. But among players signed by the manager himself, Georginio Wijnaldum (171) leads the way.

After a half-decade of service to the Premier League, he has only relatively recently received widespread praise. The Wijnaldum of 2020 hardly resembles the 2015 edition, the winger who scored four goals in one game but could do little else – particularly away from home – to prevent Newcastle’s relegation. He is now “the perfect midfielder” for the European champions and an invaluable cog in a record-breaking machine. Liverpool really could do with sorting out that contract.

9) Arjen Robben
Ignore the preconception. The player you are thinking about now is not the one that graced the Premier League. Arjen Robben: The Later Years was a polished, refined and almost mechanical talent that perfected one action to the point of artistry. The 20-year-old that joined Chelsea in 2004 was more raw, with sharper edges and more unpredictable brilliance.

He was neither “scoring 20 goals a season”, nor keeping Mo Salah and Kevin de Bruyne out of the team at Stamford Bridge; John Terry has his years mixed up. But Robben really was sensational on these shores, losing just four – and winning 55 – of his 67 Premier League games. The defeats to Middlesbrough (February 2006), Newcastle (May 2006) and Tottenham (November 2006) stung, but his 21 minutes before succumbing to injury in a January 2007 loss at Liverpool summed up those familiar fitness frustrations.

Robben undeniably grew more effective after leaving Chelsea, establishing his trademark move and exploiting it relentlessly to become a European champion. He was a better player in Germany than he was in England. But the most exciting, thrilling iteration of the Dutchman came in those three captivating years as an inverted Chelsea winger. Jose Mourinho has not found a player quite like him since.

8) Marc Overmars
There is something gloriously neat about a record of 25 goals in 100 Premier League games that juxtaposes perfectly with the destructive wonder of Marc Overmars. In terms of Arsenal’s first title puzzle, the Dutchman was the final piece.

“He’s a winger-type who can go in the space, is a good dribbler, and we needed this type of player,” explained Arsene Wenger in the summer of 1997. “We had a problem this season, especially at home. Don’t forget that we were maybe the best away team but we lost the championship at home. I think we needed more power and more speed at home, and more penetration.”

The evidence unsurprisingly supported the theory. Four clubs had earned more points at home than third-placed Arsenal in 1996/97, with lowly Middlesbrough scoring just two fewer goals. Arsenal had lost as many games at Highbury that season as Wimbledon at Selhurst Park.

Then Overmars happened. He offered Arsenal an entirely new dimension as an explosive wide player, scoring 12 goals and assisting five in his debut season – 11 of which were at home – as the Double was delivered to north London. His strike in a 1-0 win over Manchester United in March was a fine accompaniment to the opening goal in the FA Cup final. Without him, the Gunners might never have scaled that first mountain.

Marc Overmars: “English football changes you, it turns you around, it took me a step forward. Arsene Wenger arrived a year before me, Dennis Bergkamp made a big impression in England, it was a fantastic time, I think we changed the history of the club a bit.” #Arsenal #Legend pic.twitter.com/gL37LYza0Q

7) Jimmy Floyd Hasselbaink
The thing that strikes you most when watching highlights of Jimmy Floyd Hasselbaink is the elegance in his variation. He was powerful but delicate, excellent in the air, with legs that would make Roberto Carlos blush and a tender touch if the situation required it. He was strong and fast yet every bit as skilful and technical. He could score with both feet.

Five players have won the Premier League Golden Boot outright but never the title. Mo Salah will reduce that field come May, while Harry Kane has a few more years to remove himself, too. Hasselbaink is destined to stand alongside Kevin Phillips and Luis Suarez as great goalscorers fighting against the greatest teams.

His record is ridiculous. Across six seasons with Leeds and Chelsea, he scored anywhere between 15 and 29 goals. Even in two years at Middlesbrough he did not fail to register double figures, with a forgotten spell at Charlton in his twilight period the exception to a rule of dominance. For a player who is never included in the conversation when it comes to the Premier League’s greatest strikers, he didn’t do half bad.

6) Edwin van der Sar
The oldest player to win a Premier League title was already 30 by the time he graced us with his presence. Edwin van der Sar was so reluctant to spend his time watching new Juventus signing Gianluigi Buffon from the sidelines that he sought the solace of First Division champions Fulham.

It was a move that would transform his career. The Dutchman was excellent at Craven Cottage but his true Dutch mastery would enjoy a renaissance at Manchester United. Clean sheet records tumbled, Player of the Year nominations were earned, titles were won and Nicolas Anelka was thwarted. Van der Sar more than warrants his status as a member of United’s holy Premier League goalkeeping trinity alongside Peter Schmeichel and Massimo Taibi.

5) Robin van Persie
It is easy to forget just how sensational Robin van Persie was. His first five or so years at Arsenal were ordinary as he transitioned from winger into centre-forward. His final two of three seasons at Manchester United were unremarkable as his brilliance fizzled out. But for the time between, few came close to matching him.

That move to Old Trafford soured his relationship with the Arsenal fans, and while he is remembered fondly for delivering Sir Alex Ferguson his final title, Van Persie was never fully embraced by the United support. Both sides should still appreciate how spectacular he was at his peak.

4) Virgil van Dijk
There is a Liverpool BVD and a Liverpool AVD. On the date of his signing, December 27, 2017, the Reds were fourth in the Premier League. They had the joint-sixth best defensive record with Arsenal, conceding almost twice as many goals as leaders Manchester City after 20 games. They needed some outside inspiration.

In Van Dijk’s 77 league games since, they have conceded 47 goals and kept 39 clean sheets. The boy who impressed for Southampton has become the man leading Liverpool to unprecedented glory.

Juventus might think £150m can prise the centre-half away but Klopp knows he is damn near invaluable to his cause. Liverpool have proved they can cope without Alisson, Fabinho and any member of their front three at certain periods; it would be genuinely fascinating to see that defence sans Van Dijk for a month or so.

3) Ruud van Nistelrooy
Ruud van Nistelrooy finished outside the top three Premier League goalscorers in just one of his five seasons. The Achilles problem that marred that campaign echoed the knee issue that postponed the Dutchman’s move in the first place. United had agreed a club-record transfer and even arranged a press conference in the summer of 2000, only for a problem with his knee to surface during the medical. He ruptured his anterior cruciate knee ligaments the next day, but there is a reason United’s interest did not wane.

Van Nistelrooy quickly set about making up for lost time, forming a rather contradictory reputation as a supreme goalscorer but not a great player. His second goal in a hat-trick against Fulham in March 2003 flew in the face of that accepted wisdom, with Ferguson noting after that particular game that “a lot of his play is an improvement on last year”.

Scoring was his lifeblood, of course. In most other eras the ridiculous numbers Van Nistelrooy posted would have generated wider acclaim. The presence of Thierry Henry on the opposite side of one of the Premier League’s most enduring club rivalries ensured he would often be unfavourably compared. But while the Arsenal legend helped redefine the role of a striker as a multi-faceted athlete, Van Nistelrooy was an extraordinary and effective throwback.

2) Jaap Stam
It might be controversial to many, but the Premier League’s greatest Dutch centre-half played on the other side of the north-west divide. Manchester United won the title in each of Jaap Stam’s three full seasons, and just once in five years after he left.

He was present for their greatest period in the Premier League, and absent for their weakest. Stam was a fearsome defender, as close to an automatic clean sheet as possible. He played every minute of the Champions League run of the Treble-winning season and lost just five of his 79 Premier League appearances.

Ferguson admitted the decision to sell Stam to Lazio in 2001 was “a mistake”. Then 29, the Dutchman was in his prime. United spent close to £30m on Rio Ferdinand a year later for a reason; Laurent Blanc as a stop-gap in the interim helped them realise that there is only one substitute for brilliance: more brilliance.

He was, for want of a better word, an icon.