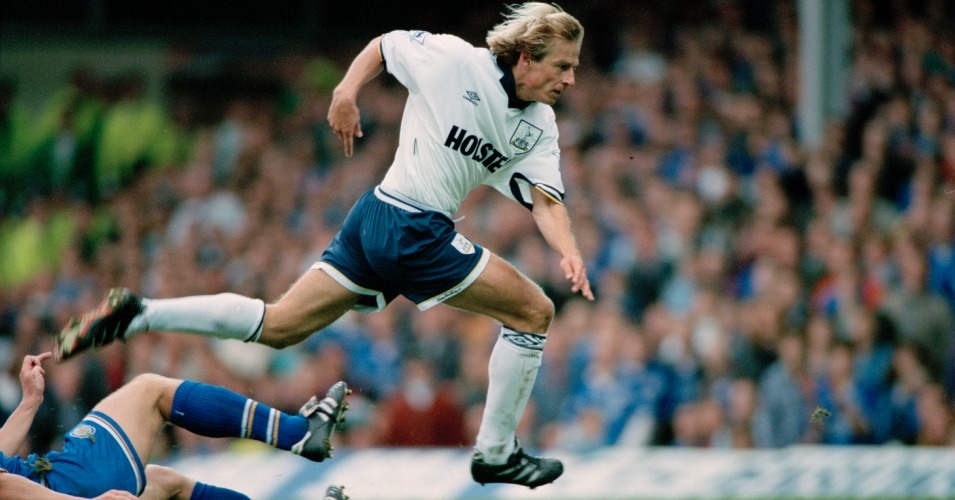 Jurgen Klopp is one of a relatively rare breed – a German choosing to work in English football. Here are the best…

10) Thomas Hitzlsperger (Aston Villa, Everton, West Ham)
Despite playing six years of his career in England, it never really felt like Hitzlsperger was appreciated here. He certainly never showed the sort of form for Aston Villa, West Ham and Everton that would persuade you he deserved 52 caps for Germany. That’s more than Matthias Sammer.

Hitzlsperger actually won the vast majority of those caps when back in the Bundesliga at Stuttgart, but spent enough time in England to gain a nickname for the power of his shot and perfect a spectacular Brummie accent. It’s also important to point out that the midfielder’s parents, Ludwig and Anneliese Hitzlsperger, have the most Germanic names in history.

9) Uwe Rosler (Manchester City, Southampton, West Brom, Brentford, Wigan, Leeds)
Until Jurgen Klopp arrived in Liverpool, the only German manager in Premier League history was Felix Magath, a man who looked like Mr Majeika (in the books) and failed to realise that the only injury you can cure with cheese is a broken heart.

For that reason, Rosler must make the list. He started his career in England with Manchester City, the club’s top scorer in three consecutive seasons from 1994/95 onwards. His spells at Southampton and West Brom were altogether less successful, but he does deserve points for taking Brentford close to League One promotion before Mark Warburton finished the job. Now at Leeds, Eisler is earning a knighthood for services to working with Massimo Cellino.

8) Per Mertesacker (Arsenal)
Despite his recent patchy form for Arsenal, there is no doubt as to the high regard Mertesacker is held in Germany. He retired from international football in August 2014 at the age of 29, having already earned 104 caps.

Mertesacker is not strictly the perfect fit for the Premier League. His lack of pace is his most obvious weakness, but – when in form – makes up for this with his positional awareness. His height earned him the nickname ‘Big F**king German’, so it’s safe to say he’s good in the air.

Fact fans might be interested to know that Mertesacker has only been booked ten times in 178 matches for Arsenal. Or not.

7) Markus Babbel (Liverpool)
Having won three Bundesliga titles and a UEFA Cup in six seasons with Bayern Munich, Babbel arrived at Liverpool in the summer of 2000. He enjoyed a wonderful first season in England, starting 60 matches as an attacking right-back as his new side won the treble of FA Cup, League Cup and UEFA Cup.

Unfortunately, after reaching 50 caps for Germany and looking to be a fixture within Liverpool’s side, Babbel contracted Guillain-Barré syndrome, a virus effecting the nervous system that causes serious muscle wastage and can be life-threatening.

Forced to put his career on hold during his lengthy recovery, it is a testament to Babbel’s immense strength and mental fortitude that he managed to continue playing for Blackburn Rovers and Stuttgart following his illness.

6) Bastian Schweinsteiger (Manchester United)
Loses places for not actually doing very much in England yet (I made that mistake with Angel Di Maria), but there is no doubting Schweinsteiger’s pedigree. It is a crying shame that he didn’t come to the Premier League until he was the wrong side of 30 and with suspect knees, but still… this is Germany’s current captain.

Schweinsteiger will not start every game for Louis van Gaal, but his role is at least partly intended to be a guide for the club’s younger players. His skills, knowledge and experience are vital in an otherwise relatively inexperienced first-team squad.

Just a plea to Van Gaal: Don’t try and make him press high up the pitch again. It’s a worse look than Alex Song’s hat and denim jacket combination.

5) Michael Ballack (Chelsea)
Now looking back at Ballack’s career, it seems extraordinary that he played more games for Chelsea than any other team, 166 over four seasons. That’s despite not joining until two months before his 30th birthday.

Ballack’s reputation is as European football’s nearly man, having finished as a runner-up in the World Cup, European Championships, Champions League (twice), Premier League (twice) and Bundesliga (three times). That rubs the varnish off a CV which includes 98 caps for Germany, three German Footballer of the Year awards and being named in four different Teams of the Tournament at the World Cup or European Championships.

Moving to a deeper role at Chelsea than during his time in Germany, Ballack inevitably lost his reputation as one of Europe’s greatest all-round midfielders of the last 30 years. One can’t help but wonder what would have happened had he joined Alex Ferguson at Manchester United. Having been signed by Jose Mourinho, Ballack then had five managers in four years at Stamford Bridge.

4) Dietmar Hamann (Newcastle, Liverpool, Bolton, Manchester City, Stockport County)
Only the second manager on our list, but it’s probably best to focus on Hamann’s playing career in England rather than the four-month spell in charge of Stockport County. The German’s entire managerial career consists of three victories.

Signed by Newcastle after the 1998 World Cup, Hamann impressed so much on Tyneside that he left to join Liverpool for a £2.5m profit after one season. It was on Merseyside that he established himself as one of Europe’s most reliable central midfielders, integral to their 2000/01 treble and 2005 Champions League final victory. Gerrard took the headlines, but Hamann deserves at least as much praise.

Hamann then signed for Bolton for one day before a change of heart saw him join Manchester City instead. He stayed at City for three years, eventually retiring after a brief spell as player-coach at MK Dons. His football heart would forever remain in Liverpool.

3) Mesut Ozil (Arsenal)
The subject of a million articles, and probably the most divisive Premier League player of the last two years. Now, finally, people are seeing the magic of Mesut.

Ozil suffers for his style. He is relaxed to the point where it can seem as if he doesn’t care. Up front this can be incredibly attractive (see Berbatov, Dimitar), but in the hustle of a Premier League midfield Ozil can sometimes seem a willing passenger. It only takes one sumptuous pass or flick to remind us of the talent the German possesses.

In many ways, Ozil is not made for this Premier League world. It is a league that was fashioned on blood and thunder, kick, rush and rush again. He is the calm amid the storm, eternally able to side foot a pass or clip through a through ball in the most frantic of situations. Frankly, I’m in love.

2) Jurgen Klinsmann (Tottenham)
When nasty Jurgen arrived in North London in July 1994, the mood across the nation’s media was one of accused villainy. Klinsmann had played a role in England’s exit from the World Cup four years earlier, and his alleged theatrics resulted in a frosty reception. Like elephants, journalists never forget.

It became a modern love story to rival Casablanca. Klinsmann not only scored a bagful of goals in England, he also displayed a humour and humility that few gave him credit for. His Football Writers’ Association Footballer of the Year award at the end of his first season was like the long, lingering snog as the credits roll up and everyone starts to brush the popcorn kernels from their laps.

Having left for Bayern Munich after a solitary season at White Hart Lane, Klinsmann promptly returned on loan for the second half of the 1997/98 season, scoring nine goals in 15 league games including four against Wimbledon to secure Spurs’ Premier League safety. A potential hate figure had become an English football cult hero.

1) Bert Trautmann (St Helens Town, Manchester City, Wellington Town, Stockport County)
One of English football’s greatest stories, captivating enough that it formed the subject of this excellent book, which you should buy. I shall tell the extremely abridged version.

Trautmann was born in Germany, joining the Hitler Youth in 1933 and then the Luftwaffe in 1941. Serving in Poland, he was imprisoned for three months after a practical joke resulted in injury.

After winning five medals on the Eastern front, Trautmann was captured in Normandy after surviving heavy bombing and trying to head home alone. Having previously escaped from Russian and French captives, he was imprisoned in Essex and then sent to a prisoner of war camp in Cheshire.

Upon the closure of the camp, Trautmann stayed in England and played amateur football for St Helens Town. His form saw him scouted and signed by Manchester City, turning professional in 1949. Facing regular abuse from home and away supporters over his history, Trautmann won over City supporters with his good nature and wonderful displays, establishing himself as one of the finest goalkeepers in the country.

Finally to the 1956 FA Cup final, when Trautmann collided with the knee of Birmingham City’s Peter Murphy after 75 minutes with his side 3-1. With no substitutions, Trautmann played on and was later discovered to have broken his neck. The third vertebra had wedged against the second, causing immense pain but preventing further damage which could have cost Trautmann his life.

That there is a tale to tell.