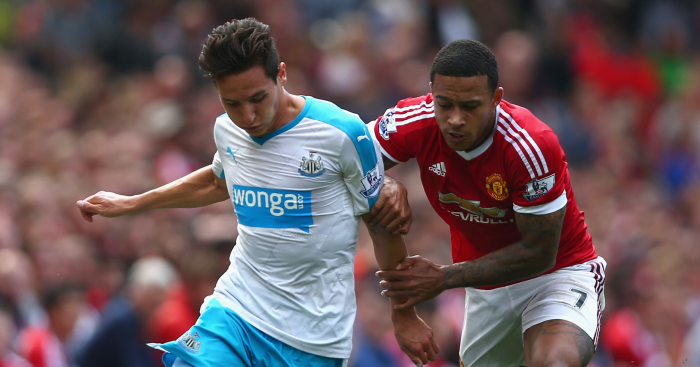 10) Bafétimbi Gomis (to Crystal Palace)
Some stars shine so bright that they burn out. Others twinkle for years in France, flicker briefly in south Wales and glisten pleasingly thereafter. Bafétimbi Gomis has reached double figures for league goals in ten of 12 seasons from 2006/07; the two campaigns he failed to reach that mark both came with Swansea.

Gomis still made his mark on the Premier League. He scored seven goals in his first season, netting in wins over Arsenal (twice) and Manchester United. He then hit four in as many games at the start of the 2015/16 season, finding the net just twice more in a further 29 appearances. And the panther celebration was f***ing brilliant.

The forward left the Liberty Stadium two years ago to join Marseille on loan, rekindling his love for Ligue Un, and scoring 21 times in 34 games. That earned him a £2.5m move to Galatasaray, where he ended the 2017/18 campaign with 32 goals in 38 games as the Turkish Super Lig’s top scorer. And the 33-year-old has scored seven times in ten matches for new club Al-Hilal. Crystal Palace could probably do with someone who has 60 goals in their last 82 games.

9) Nabil Bentaleb (to Burnley)
Mystery surrounds the sharp decline that soon followed Nabil Bentaleb’s sudden Tottenham rise. The midfielder made his debut under Tim Sherwood in December 2013, played more often than Danny Rose, Mousa Dembele and Kyle Walker in the 2014/15 season, and signed a five-year contract shortly after starting in a League Cup final defeat to Chelsea. But his stock almost collapsed completely the following season, and a loan move to Schalke in summer 2016 was just the first step towards his eventual exit.

Bentaleb has found his feet once more in Germany. The 23-year-old has added much more attacking depth to his game, evolving from a pass-centric defensive pivot into a much more rounded midfielder. One of the many victims of Mauricio Pochettino’s relentless and unyielding approach has used that rejection to help him develop into a far better player.

8) Matija Nastasic (to Watford)
“In five or six years time you could see him developing into a Vidic,” Kevin Keegan said in April 2013. “He could become even bigger than Vidic, who has probably been the best centre half in this country for the last five or six years.”

It was a sensational claim to be made about Matija Nastasic, who had not yet completed his first season at Manchester City. Yet it was testament to the development of a centre-half who seemed to take to the Premier League like a tough-tackling duck to water. At just 20, the Serb slotted straight into a Premier League-winning central defence and looked to make himself comfortable for the next decade or so. His omission from the 2012/13 PFA Young Player of the Year shortlist was a genuine surprise.

Then Roberto Mancini left, and Manuel Pellegrini pressed the reset button. The clean slate was a welcome reprieve for most of an under-performing squad, but effectively punished Nastasic for excelling where others had failed. An injury further weakened the standing of a player who has been licking his wounds with Schalke ever since.

The Frenchman signed a five-year deal at St James’ Park in August 2015, but lasted just five months before returning to Ligue Un with three Premier League starts to his name. “I arrived, I played two or three games as a starter, and then, in the fourth, our striker gets sent off and I end up up front against Arsenal. Then, I never played again,” was his official take when asked last month.

The 25-year-old has hardly been affected by the experience. His form for Marseille has been so good that club president Jacques-Henri Eyraud “won’t even look at” an offer of £70m for a player they re-signed for less than £10m. But curiosity might just get the better of Thauvin, a World Cup winner who believes he is now “capable of imposing myself in England”.

6) Serge Gnabry (to Newcastle)
In explaining Arsenal’s decision to hand him a five-year contract in October 2013, Arsene Wenger praised Serge Gnabry’s “technical ability”, “power”, “pace”, and “finishing quality”. The 18-year-old had showcased each just a month prior with his debut goal against Swansea, and a Golden Boy award nomination soon followed.

That was about as good as it got. After missing the entire 2014/15 season through injury, a misguided loan spell with Tony Pulis’s West Brom went about as well as could be expected. By August 2016, the German international was sold to Werder Bremen, only to rock up at Bayern Munich – and revel in unnecessary backheels – 12 months later.

5) Jérôme Boateng (to Manchester United)
Just three players have played for both Manchester City and Manchester United in the 21st century. Andy Cole was the first man to cross that precarious bridge, while Carlos Tevez and Owen Hargreaves both featured for the bitter inter-city rivals. All three crossed the divide having pledged their allegiance to the red side first.

Jérôme Boateng could have been – and still might one day be – the outlier. The 12 months he spent as an inexplicable right-back have long been airbrushed from an otherwise glittering C.V., with 16 trophies and a World Cup winner’s medal to show for his seven years at Bayern Munich. If only Jose Mourinho would pick up the phone again…

4) Suso (to Liverpool)
Over five years at Liverpool, Suso started just 12 games. The identity of the opposition gives a glimpse into why he decided to swap Merseyside for Milan: Young Boys (twice), Udinese, Norwich, Stoke, Reading, Everton, Newcastle, Wigan, Fulham, Stoke and Mansfield.

You could hardly argue it was a mistake. Suso actually left the Liverpool flock for Almeria initially, but earned a move further afield to Italy in 2015. Two goals in a Derby della Madonnina draw in November 2016 helped endear him to a notoriously difficult fanbase, and he has further established himself at the heart of Gennaro Gattuso’s side since. The 24-year-old – who wants to return to Liverpool “some day” – has at least two more assists than any other player across Europe’s top five leagues this season (8). His former club could probably find a place for him.

3) Samir Nasri (to West Ham)
Plenty has changed since Samir Nasri last kicked a Premier League ball. Manchester City have won one Premier League title without him; Donald Trump was elected president of the United States, and has been an overwhelmingly popular leader ever since; Drip Doctors saw their shares randomly skyrocket in late 2016; Sergio Aguero has even decided to cosplay as his former teammate.

Fate has dictated that Nasri’s most recent Premier League appearance came against his probable future club. With 75 minutes of City’s 3-1 win over the Hammers in August 2016 gone, Pep Guardiola captured the essence of a quite bizarre period in the club’s history by replacing Nolito with a silver-haired and lesser-seen Frenchman. “It depends on the player, but he can stay,” the manager said after the game, before loaning him out to Sevilla three days later.

Two years on, he is finally making his way back to these shores. After Roberto Mancini once admitted he “would like to give him a punch”, and Guardiola branded him a “mess”, Pellegrini seems to be a happier fit.

2) Memphis Depay (to Tottenham)
There was no scoffing, no mockery or derision when Memphis Depay stated that he had “become more mature” earlier this year. This was a player who had been placed at the top of the football mountain altogether too soon and, like many before him, lost his footing before crashing into obscurity. Most are permanently labelled ‘flops’ or ‘failures’ thereafter, but he should be praised for learning from his mistakes and using those lessons to restart his climb.

Depay struggled at Manchester United. He scored two goals and assisted one in 33 Premier League games, floundering under Louis van Gaal before being hastily cut loose by Jose Mourinho. Yet he has not allowed that to define him. He has used it as fuel, motivation to succeed elsewhere. The Dutchman has since scored 29 goals and assisted 24 in 66 Ligue Un games for Lyon.

After dominating the Eredivisie in similar fashion, it is impossible not to wonder whether Depay is simply the sort of big fish that thrives in the smallest of ponds. But at just 24, he has earned another opportunity to prove himself on a grander stage. If he ever opts to try and fully restore an unfairly tainted reputation, the Premier League should welcome him back with open arms.

1) Jadon Sancho (to Manchester City)
“I’m not wasting any thoughts on a change,” said Jadon Sancho last week. “I owe a lot to Dortmund and I have a lot in mind with this team. I’m happy here and did not sign for so long for nothing.”

Gareth Southgate’s new England favourite is not your ordinary 18-year-old. He is both fleet of foot and measured of mind, blessed not only with searing pace and sensational skill but drive, determination and maturity. Not even Manchester City could contain his burgeoning talent, and Sancho deserves immense credit for seeking an alternative route when the pathway to their first team was blocked.

No-one could have predicted his subsequent success. Not Guardiola, not City, not Dortmund, and not even Sancho himself. He has scored five goals and assisted a further eight in 17 games, punishing a weary Bayern Munich at the weekend and making his mark in the Champions League. England could not resist strapping themselves to the rocket and handing him his debut last month.

Guardiola rubbished the idea of an imminent return for the winger recently, but it seems inevitable that Sancho will one day return to right his Premier League wrongs. There is unfinished business at the Etihad.