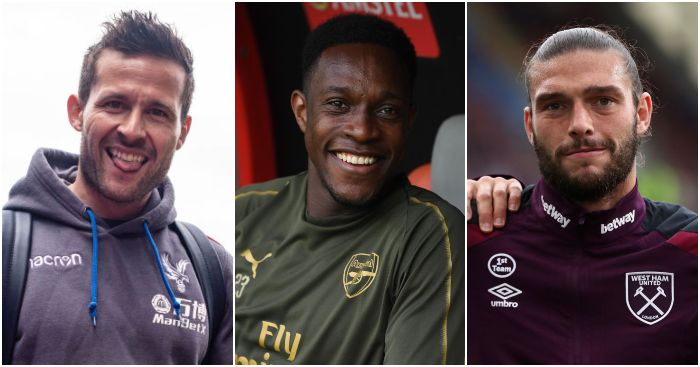 10) Adrian
West Ham’s move to the London Stadium seemed to ruin Adrian. Before they left Upton Park, the Spaniard was a top-notch Premier League goalkeeper; upon relocation, Adrian couldn’t keep the gloves off Darren Randolph or Joe Hart.

It was third time lucky for the Hammers in their attempt to replace him, with Lukasz Fabianski earning himself the West Ham Player of the Season award in his first year at the club. But according to football.london, had Adrian not turned down a new deal last summer worth £55,000 a week – plus a £150,000-per-season loyalty bonus and a £15,000-a-week appearance bonus – then Manuel Pellegrini might not have gone for Fabianski. Now, Adrian is left to survey his options, which don’t appear to include his preferred choice of a return to Real Betis, despite the sale of legendary Irishman and former Tottenham keeper Paul O’Pez to Roma.

9) Ashley Williams
Remember how good the Wales defender was for Swansea? That’s the Williams his agent wants you to remember, not the centre-half who looked like an imposter in the Everton defence, nor the one who made little difference to Stoke’s rearguard last season.

“My agent says we have got good options abroad and here,” said Williams while on international duty earlier this summer, but nothing has yet come of those proposals. Nor have they been discussed in public; Williams has been linked with strangely few clubs, which may be due to the fact he turns 35 next month. A reunion with Wayne Rooney at DC United is the only meaty link to have surfaced this summer.

8) Hatem Ben Arfa
Only Los Angeles could cope with two egos like Ben Arfa and Zlatan Ibrahimovic occupying the same city. Both Galaxy and LAFC have been in touch with the France star’s representatives, whose phone has apparently been hot over the summer.

Espanyol seem to be one of the front runners, with Real Betis and Leganes also watching on from Spain while Eintracht Frankfurt and Borussia Monchengladbach are also interested in the 32-year-old. Premier League and Ligue 1 sides, presumably, have decided to swerve the former Newcastle, Hull, PSG, Rennes, Nice, Marseille and Lyon star but Ben Arfa is hardly over the hill and Arsenal need a winger. Time to bury the hatchet, Unai?

7) Yohan Cabaye
Each of us miss him deeply. Not since his release by Crystal Palace in the summer of 2018 has the dreamboat graced these shores, with Al-Nasr taking Cabaye on a two-year deal that July. By January he was one of a number of players who were let go, bringing an abrupt end to his first foray outside of France or England.

The 33-year-old has been an unfathomable free agent since. An unusually low level of speculation, save for Palace and Newcastle fans imploring their clubs to bring him home, has seen Cabaye almost disappear from the public eye. Oh, but those eyes…

6) Fernando Llorente
Speaking of which…

Anyone would struggle to fill Harry Kane’s boots. In the centre-forward’s absence – when Mauricio Pochettino opted to go like-for-like rather than utilise Heung-min Son or Lucas Moura – Llorente did a creditable job, scoring six goals in all competitions last season. The fact Spurs would like to re-sign the former Spain striker – albeit on reduced terms – tells you that Pochettino was relatively satisfied with the stand-in’s performance, and if it’s good enough for MoPo…

Llorente seems to have done enough to catch Roma and Fiorentina’s eye. At least three Premier League clubs were in need of a centre-forward – Newcastle have since filled their No.9 void – but the 34-year-old would do a decent job for anyone outside the top six.

5) Gary Cahill
If you listen to Danny Mills – and to do so is medically inadvisable – then the most desirable free agent of them all is a 33-year-old whose last league start came in a 3-0 defeat to Newcastle in May 2018.

“It’s a no-brainer to take him,” he Freudian slipped into a conversation earlier this month. “Why the likes of Arsenal – even Manchester United – haven’t, I don’t know!”

It is unfair to completely rubbish the suggestion that Cahill has plenty still to offer, of course. His Premier League, Champions League and international experience is vast, his trophy cabinet is bulging and his love for England is such that he turned down the chance to stay in Turin for five months and win a Serie A title in January. Someone will surely give him another dressing room to shout in and another team bus to sit at the front of and choose the music for soon.

4) Andy Carroll
It is a rather neat microcosm of Andy Carroll’s entire career that he has not started in a Premier League win since January 2018, but that he scored twice in that 2-0 victory over West Brom. His unique brand of effective brilliance is only useful for so long until his body fails him.

There should be plenty of sympathy for a striker who complained of “the sh*t I get” with regards to his fitness problems at the end of last year. The mental strength required to return from long-term injury is often underplayed, particularly when it is a continuous battle.

Someone, somewhere, will surely take the gamble. Carroll is back training with West Ham, and Newcastle are considering a move. The fella has scored a Premier League hat-trick more recently than any Manchester United player, for crying out loud.

3) Danny Welbeck
Every club needs a Daniel Nii Tackie Mensah Welbeck. That much is irrefutable. He is a 28-year-old, Premier League-winning, versatile international. He has been a valued, useful member of every squad that has ever had the pleasure of accommodating him.

But those bloody injuries. Welbeck has been plagued with extensive knee problems for almost a decade, combining them with toe, groin, hip and ankle injuries since he joined Arsenal in 2014. Potential suitors, including Lazio and a number of Premier League sides, are therefore baulking at a reported wage of £100,000 a week and a £5m signing-on fee. If only someone could work out either how to harvest his working parts or replace the perma-broken ones with bionic substitutes.

2) Mario Balotelli
It’s a surprise that no headline-thirsty Premier League chairman has taken a punt on Mario just yet. The 28-year-old was playing for Italy a year ago and though he burned his bridges with Nice, eight goals in 12 games for Marseille in the second half of the season put him in the shop window in the nick of time.

Having to deal with Mino Raiola demanding around £75,000 a week for his client might explain some clubs’ reticence and the suspicion is that Balotelli is enjoying a summer off without having to worry about pre-season training. That isn’t to say the former Man City, Liverpool, Inter and AC Milan striker isn’t keeping fit, but he is clearly in no hurry. His options will presumably swell when the window closes and a manager panics over his side’s lack of firepower.

1) Daniel Sturridge
When the former England striker was reunited with his dog after the Lucky Lucci was stolen in LA, it was presumed that Sturridge would double down in his search for an employer next season. So far, nothing doing.

Rangers, Aston Villa and most recently Newcastle have been linked with the 29-year-old but suitors are presumably wary of three things: Sturridge’s fitness record, his motivation levels, and his salary expectations. If the ex-Manchester City and Chelsea striker could tick all three boxes, there would be a queue of clubs lining up to take up. Even if only the first two, Sturridge would be worth the pay packet. Alas, no…